We review Byzanz, an auction and card drafting game published by Renengade Games Studios. In Byzanz, players are trying to earn the most points by auctioning off sets of goods and drafting new cards. 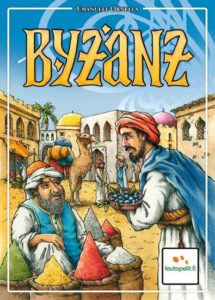 Welcome to the Byzantine Market. You will be bidding on bundles of different goods, hoping to acquire enough to sell for a profit. The resources you will be bidding with are the goods that are in your hand. Needless to say, the theme here is pretty thin. But let’s time a look at the gameplay and the decisions you will have to make to be the richest merchant in all of Byzantium.

Byzanz is an auction and drafting game for 3-6 players. It plays well at all player counts and takes 20-30 minutes.

In Byzanz, players will compete in auctions, trying to collect sets of various goods. The goods deck in Byzanz consists of 6 different types of goods, with values from 1-4. Once a player had any three cards of the same good, they can be “sold”. The lowest two cards are discarded from the game and the highest card is kept face-down in a scoring pile.

There are also merchant cards which can be used as a wild good to complete a set. They can also be played as a set themselves and are worth five points if you sell a set of three merchant cards.

You use the goods in your hand as your bid during the auction. You can play a number of cards in front of you to bid their combined value. Bidding continues around the table clockwise and each player must increase the current bid or pass for that auction. Once the winner is determined, the goods they used to bid are separated by type and placed in the central market. They must also give one of the goods they won to the market.

Once everyone has won an auction, players will also get a chance to obtain goods from the Byzantine market. Starting with the player who won the last auction, each player will draft one type of good and take all of the goods of that type from the market. After all cards have been auctioned off, players take a final trip to the market and can sell any sets they can put together. The game ends and the player with the most points from their sold sets wins.

Auction games can be tricky as knowing how to value particular goods isn’t really intuitive and only comes with repeated plays. Byzanz is even trickier—the cards you are bidding with are also the cards you are trying to collect. It can be extremely difficult to try to figure out what to do, but it gives the game a good tense feeling in about a 30 minute experience.

The key to Byzanz is that you sell in sets of the same good. Obviously, the ideal situation when selling goods is to sell a 4-value good along with two 1-values. The lower values get discarded from the game and you’ve scored the highest amount you can hope for. But at times you will have to discard more valuable cards to play a set when you run up against your hand-size limit (7 cards).

The various values of goods also come into play with the auctions. You don’t necessarily want to use your 1-value cards as part of your auction bids because it takes a whole lot of them to win an auction and you obviously need to make as many sets as possible. But you don’t want to spend those 4-value cards as your bid either, so it’s the middle values that are ideal for bidding.

How this all ends up shaking out is that it’s impossible to look at a stack of goods that are being auctioned off and declare with certainty, “These are worth a bid of 6.” Bidding six with three 2-value cards is much more efficient than using six 1-value cards. And if you have to use a 4-value card to make your bid of 6 you are giving away a prime scoring opportunity.

The drafting from the market element adds something else to think about when bidding on auctions. There will certainly be times when you prefer to not win one of the bigger auctions so you can get an earlier pick from the open market board.

The box for Byzanz says the game length is about 45 minutes. I think that is only likely if you stop for a nap in the middle. Games seem to finish in about 20-30 minutes. The game scales well all the way up to 6 players without adding a ton of length. The downtime can be awkward as whoever wins the first auction sits around mostly uninterested in the next 5 auctions that take place. But it moves along rapidly enough to not really be a big deal.

Byzanz offers a filler-length auction game that I really enjoyed playing multiple times. The economy of various good cards gives you a lot to think about in every step of the process. The important decisions in Byzanz revolve around which cards to draft from the market and what cards to spend when bidding and selling sets.

The fact that it can accommodate a large number of players without the downtime and game length exploding is a huge plus. I’ve found it easy to bring out with entry level game groups and experienced gamers alike. Byzanz has enough unique things going on it’s easy to recommend that everyone give it a shot.

Hits:
• Unique economy as same good cards are used to bid, score, and drafted.
• Lots of interesting decisions to make.
• Plays in about 20-30 minutes.

Misses:
• There isn’t much in the way of theme.
• Minor downtime at highest player counts.