We review Button Men: Beat People Up, a dice chucking game designed by James Ernst and published by Cheapass Games. This latest offering includes some new rules, a new form factor, and a whole new setting. 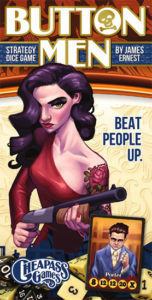 Button Men was originally released by Cheapass Games and designer James Ernest in 1999. Initially, Button Men characters and stats were detailed on physical stick-pin buttons that could adorn convention bags, t-shirts, lanyards, etc. and would signal that a player was a) a walking billboard, b) had a set of dice, and c) was up for a challenger. The character art styles, genres, and themes ranged quite bit partly thanks to the licensing deals Cheapass Games would ink with pretty much anyone who wanted one (there are 200+ licensed buttons) and partly due to outright licensing infringement.

Button Men: Beat People Up is the 2018 rerelease of the classic game. It has changed a bit in form factor and artwork, but will feel familiar to fans of the original. Read on to find out how it stacks up against other new hotness at nearly 20 years old.

Button Men: Beat People Up is a dice combat game for 2 players that takes about 10 minutes to play.

The basic rules for Button Men are fairly simple. Players pick a Button Man fighter card which displays a series of numbers that represent the die that may be used (d4 through d20). This latest edition contains a couple handfuls of dice and 48 character cards from four regions of Fight City.

Fight City is a 50s style metropolis divided into four areas – Downtown, Uptown, West Side, and Delta. Characters from Downtown play with the basic rules; Uptown characters use Rush dice which allow multiple dice to be collected with a single die; those from West Side use Shadow dice which defeat greater valued dice; and fighters from Delta use Poison Dice which give players negative points.

After picking a character, players roll their dice pool at the same time. Taking turns, players then use their die values to remove his or her opponent’s lower valued dice (e.g. 11 beats 4) or sum multiple dice to remove an equally valued die (5 and 6 beat 11). After a die is used to capture an opponent’s die, it is rerolled. When a player does not have any dice left, players count up the sides of the dice that they have captured (e.g. d20 is 20 points, d8 is 8 points) and whoever has captured the most die sides wins the round. Best out of three wins the game.

This game is set in Fight City, a 1950s gangster town somewhere on the Gulf Coast. The Fight City set is divided into four factions, each with a different style of play. Those from Downtown (“The Core”) use normal dice only. Characters from The West Side have Shadow dice, which make attacks upside-down. Those from the Delta region use Poison dice, which are worth negative points. And characters from the Hill (“Uptown”) have Rush dice, which give those characters more chances to make the first move.

Frankly, the card art looks great on the table. One of my favorite parts of this game is the fact that it feels like representation and diversity were truly a priority. It is refreshing to look at the table and find such a diverse character set. As the character artwork is the only real place to bring out the theme and, while it is largely pasted on, it is consistent throughout. Likewise, the special abilities for the different regions seem appropriately named for the power that is granted if that’s worth anything.

Ultimately the amount of time it will take you to read this review is going to rival the amount of time it takes to play a round of Button Men, and that is a very good thing. The rules are simple and easy to memorize and while a single round may only take 10 minutes or so, it is a game that lends itself to rematches and replays. As a fan of games on the heavier end of the spectrum, if Button Men was much longer it would feel repetitious. All in all, it’s easy set up and quick play time make it very right sized.

For those of you curious as to whether or not Cheapass will continue the licensing structure of the original, they have already licensed the game to Dyskami Publishing for a forthcoming Sailor Moon Crystal: Dice Challenge standalone expansion – so probably. While I haven’t noticed a resurgence of Button Men matches at conventions, I would not be surprised if the licensing of additional IPs brings it out a bit more.

Button Men is perfect as a gateway, perfect for a filler, perfect for travel, and perfect to just keep in a glove box for those impromptu game sessions. It wouldn’t be the first small form game I would grab, but it would be something I would throw in my bag. Not much has changed from the original beyond the form factor, so fans of the first will be fans of this edition (as will fans of the iOS or online implementations). I think it is worth a look for new players or for dice fanatics looking to grow the herd. While it may be slightly too classic feeling to reinvigorate a lifestyle-gamer-esque fan base, Button Men will find a home for fans of dice rolling and push your luck style games.

Final Score: 3.5 Stars – An updated edition to a classic dice game about beating people up. Wanna fight about it?

Hits:
• Faithful to the original design
• Lots of variability in gameplay despite a small ruleset
• Beautiful artwork with notable inclusive and diverse characters

Misses:
• Gameplay may feel simple for those unwilling to explore strategies
• If you hate dice rolling, this is not your game.