We review Bushido, a two player dueling game published by Grey Fox Games. In Bushido, players are dueling samurai trying to reduce their opponent's life to zero through the use of techniques, weapons, and guard. 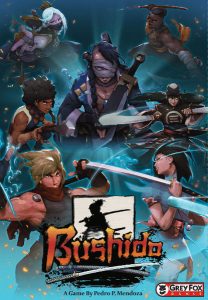 Back in 2017, publisher Grey Fox Games launched Bushido onto Kickstarter. This dueling game promised to be both fast paced and easy to learn, with a great theme to boot. Fast forward two years or so and Bushido has finally made its way to our tabletops. Set in ancient Japan, Bushido will have you trying to reduce your opponent’s life to zero using a variety of techniques and weapons.

With no shortage of dueling games to choose from, does Bushido do enough to stand out in a very crowded genre? Time to find out.

Games of Bushido begin with a draft. Four technique cards are dealt out, and each player drafts one of them. Each card belongs to one of five schools of martial arts: Earth, Fire, Air, Water, and Shadow (each of which focuses on a specific play type). The unchosen cards are discarded and a new round of drafting begins. This repeats until each player has 5 cards. Players then each choose one of their six weapons to use in the duel.

The Duel phase is where most of the game happens. Starting with the player who drafted second, players will take turns trying to strike their opponents. On a player’s turn they must either play a technique card or change their guard. A player’s guard determines if their stance is offensive, neutral, or defensive and also which abilities of their weapons they may possibly activate.

Once a technique card is chosen, the active player rolls the dice from their technique card and their guard. There are three types of dice: Attack, Evasion, and Defense. After dice are rolled, the player applies the results. Each hit rolled increases their opponent’s hit track by one, while each evade reduces the active player’s hits by one. Armor results will grant armor tokens to be used in later rounds. Torii results can grant rerolls and extra dice. A player may also use any special abilities from their technique card or weapon as applicable.

Finally, if the player has any hits on their hit track from their opponent, they must apply the results. Hits can be reduced with evade icons from their roll or armor tokens. After the hit track is resolved, it’s reset back to zero and the next player takes their turn.

Turns go by in that manner until one player reduces their opponent’s life to zero and wins.

To be fair to Bushido, the quick gameplay summary above really doesn’t do justice to how good of a game Bushido is. There a many layers to this onion that a quick summary can’t explain. So I’ll try and hit on some of the highlights on why I love Bushido so much.

To start with, there is the draft. Even though it’s only 5 cards, the draft is a crucial part of the game. Someone smartly said to me, “Games of Bushido can’t be won in the draft, but they can certainly be lost”. That really rang true in my experience. Since cards of the same school not only can synergize off each other but also be used to boost (roll an extra die), there is a natural inclination to focus on just one school for that. However, then you lose flexibility. If you go heavy fire, you are going to be hurting for defensive dice when your opponent gets a strong hit on you. So there is plenty of room in Bushido for forming a deck strategy.

And I also enjoyed how there were three types of dice, all focused in their own area, instead of having one die that did it all. These helped players execute their strategy without relying so much on chance. Attack Dice not only focus mainly on hits but have the potential to add extra dice. I’ve seen someone start with 4 red dice end up with 7-8 hits because of chaining together Torii results. Yet when you want to avoid damage, you’ll be reaching for those blue dice. They can’t hit anything, but evading hits can be crucial to staying alive.

Speaking of damage, the hit track was an inspired game mechanic. It’s a non-linear track the exponentially increases in damage the more hits you do (up to instant death). Yet since hits aren’t actually suffered until the end of the defender’s turn, players have a chance to mintage some of the damage. If I know I have to defend against 10 damage, I’m probably going to grab my most defensive card (if I have one available). And all that ties into deciding when to change your guard.

Except for really short games of Bushido, you’re going to have to change your guard at some point. Just when to change your guard is really important as that’s the only way to get cards back in your hand. But when you do, you only get to roll two dice (from your guard), so you have to time it right (i.e.: not when you have a pile of hits to defend against.)

This is also what gives the game such great ebb and flow. Turns go by quickly and most are full of tension. Because this is a dice game, the luck of the roll is going to play part in how well you do. Yet Pedro Mendoza included a lot of ways to keep the player agency high. There are many ways to not only gain extra dice but also reroll them. Certain weapons can even turn misses into hits, or one icon into another. I’ve had games where I was reduced to one hit point and things seemed hopeless, only to hold on for another 4 rounds and bring my opponent within an inch of their life.

As much as I love Bushido, there are a few small chinks in the armor that I wish we’re better. The first is that the rulebook isn’t always clear. We actually played our entire first game wrong, with hits being resolved at the end of the active player’s turn instead of at the end of the defender’s next turn. Needless to say, playing with the proper rules made the game worlds better. There were also a few timing questions that I had to go to Grey Fox to get the answers on. Finally, I thought using the d12 to track hit points was kind of lazy. I would have loved to see a dial or track on the board (there is clearly room) and will probably find a better solution for future games.

Bushido was a sleeper hit for me. Once I got it to the table (and used the right rules) I have loved it more and more after each play. The replay value is through the roof and the game allows for a ton of strategic decision making. While Bushido is a dice game and luck will be a factor, the designer has giving players a ton of ways to allow for them to not be a slave to bad rolls. The odds can definitely be tipped in a strategic player’s favor.

If you want a dueling game that offers a unique experience with a great ebb and flow, then absolutely check out Bushido. This one is staying in my collection and has seen a ton of plays already.

Final Score: 4.5 Stars – An excellent dueling game that carves out room for itself in a crowded genre.

Hits:
• Excellent replay value
• Great ebb and flow to the gameplay
• Ways to mitigate the luck of the dice
• Hit track was a great mechanic