We review Bronze, an area control and route building board game published by Hobby World International. In Bronze, players are trying to score the most points by building up and expanding their civilization in the Bronze Age. 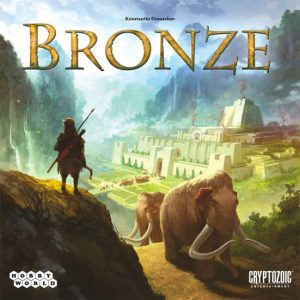 Bronze is a game about developing a civilization during the Bronze Age… or something. Let’s get this out there: Bronze is a game about strategically placing cubes. There are terrains and types of structures, but they don’t really mean much. It’s about getting the most of your cubes on a thing. Or the most of your cubes in a line. Doesn’t that sound fun?

Assuming the lack of theme doesn’t trip you up, there is actually quite an interesting game in this box. Let’s take a deeper look.

Bronze is an area control and route building game for 2-4 players. It plays in about 60-90 minutes.

In Bronze, players will develop technologies for their civilizations, allowing them to settle on various types of buildings and terrains. These settlements drive both the progress of the game and the scoring as you’ll score points for having the majority of settlements on each vertical land tile and also points for having an unbroken route of your settlements on a horizontal terrain type.

Each turn, players choose one of the four available technology cards. Each card displays three of the seven terrain types and two of the four structures. You can place a settlement marker on one of the displayed terrains, so long as there is an available structure of that type present. At the beginning of the game only one or two—depending on the player count—land tiles are revealed. When a settlement is placed on the right-most land tile, the next one is immediately flipped over and available.

Once you’ve placed a settlement you can no longer place settlements on the land tiles to the left of that land. Therefore there is some trade-off in Bronze of arriving early to the land to gain the best spots or complete your unbroken trade routes, but you’ll do so at the cost of developing more on the previous land tiles. Players will score points for having the majority of settlements on each land, so choosing to move forward is a calculated risk.

There is some compensation for early discovery, however. The first player to place a settlement on a new land tile gets to draw a number of city cards, which have end game scoring conditions, and pick from the drawn cards. Players who arrive at that land later will only get to choose from what is left.

As you acquire technology cards you will place them in four columns. When you take and place a technology card you activate not only the card itself but any previously played technologies to the left or right of that card. You also can activate any technologies of the same type that are anywhere in the placed column. It possible, therefore, to place a number of settlements on a single turn.

The game ends once two of the technology decks are emptied, a player runs out of settlement markers, or the final land has been completely developed. The player with the most points from trade routes, land majorities, and city card end-game points is the winner.

Area control games take on a lot of shapes, sizes, and many—if not most—board games have at least some area control element involved. At first glance, I thought Bronze looked like a very straightforward area control game without a lot to set it apart. However, once I started playing it I found out I was quite mistaken.

You may start off thinking that you are just trying to score the most areas you can. The actual area majority points are scored for having the most settlements on a given land tile. But if you stick around too long to fill up an area you’ll find other players quickly making long horizontal routes that can also score large amounts of points. Not to mention they get their pick of the city cards and those can have end game bonuses worth quite a lot.

Maybe you saw this early and pushed ahead, scoring a couple of trade route bonuses and getting city cards. But if you continue at this pace you’ll find yourself without any area majorities and being very stuck with fewer settlement spots available to you later in the game.

So, you’ll quickly shift from trying to do one thing to carefully balancing both. Maybe you’ll have a turn where you get a good technology that lines up with your existing columns allowing you to place 3 or 4 settlements in a single turn and they just happen to align in a way you can secure a land tile’s majority. Or maybe push a 5-consecutive settlement route that no one else could see coming.

You have to be careful to not telegraph your plans too clearly as your opponents can very easily block your intended paths. While area control games are clearly going to have some confrontation, Bronze has it more than most. Consecutive routes only score when they reach 3, 5, and 7 settlements. So if someone has already got 4 in a row, you’ll likely be setting up a camp right next to them to prevent them from scoring the additional points. If you dislike cussing out other players, Bronze may not be for you.

For all its positives, Bronze drags out considerably longer than it should. In its defense, it somewhat has to for the columns and adjacent technologies to work out in a meaningful way. But unfortunately you don’t really feel like you are building some great empire, you just get to place a couple more cubes. The whole game feels about the same with some good interplay between players but doesn’t give an engine or civ-building type of satisfaction. If the game was 30-45 minutes, this wouldn’t be a problem. But unfortunately, at the full complement of 4 players, which is the best count to play at, it finishes in closer to 90 minutes.

Bronze offers quite a bit of interesting play between players as you have to balance your progression throughout the game mostly based on the actions of everyone else. You are somewhat limited by the technology cards but not significantly, as you can always use the bronze working side of the card. Bronze really comes down to making the right gambles at the right time on what your opponents are able and willing to do.

Bronze mostly misses the mark with the play time as was every bit of 90 minutes with 4 players. It just took too long and started to feel repetitive.

Final Score: 3.5 Stars – A fun area control game with more than a little meanness that just doesn’t know when to quit.

Hits:
• Players must balance between progression and control.
• City cards provide an incentive for giving up on some areas early.
• Randomness of technologies is mitigated with bronze working side.

Misses:
• A fun 30-minute game that takes three times that to play.
• Do you want a theme? Sorry.