We review Bravo, a roll and write board game published by Stronghold Games. In Bravo, players are trying to earn the most points by rolling dice and checking off boxes. 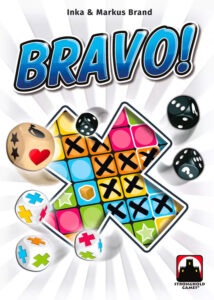 There is nothing I love more than trying to write a new intro for a roll and write. So I’m going to assume, intrepid board game review reader, that you know of the genre at this point. Themeless, quick playing, small box games where you’ll generate some random things and use those things to mark off boxes on a sheet of paper in pursuit of sweet, sweet, points.

That’s Bravo! And a hundred other games. So let’s dig a little deeper in how it works and discuss just when is enough enough when it comes to these games.

If you have played Noch Mal (introduced to the US from Stronghold Games as Encore) you’ve played 90% of Bravo—unsurprisingly originally titled Noch Mal So Gut in Germany.

But if you haven’t, here’s the just. On your turn, you’ll roll six 6-sided dice. Three of them are numbered 1-5 with a ? symbol on the sixth side. The other three have colored X’s matching the colored boxes on your sheet of paper (and one black X). You’ll choose a number and a color and mark off that many boxes of the chosen color. If you choose the ? or black X result, they are essentially wild letting you choose any number 1-5 and any color. But you can only choose a wild result 6 times for the entire game.

Pretty simple, right? There are a few caveats. On each turn, all boxes you X out have to be contiguous. You also have to be able to use the full value, so if you only have 4 yellow boxes you can’t choose a yellow and 5 result and just not use the last one. And you can’t just mark off anywhere on your paper, your first box must be adjacent to an already marked off box. You’ll score points for being the first to complete columns and all the boxes of each color.

Oh, and whatever dice the active player takes, the other players can’t use and must pick 2 of the remaining dice. This might be my favorite mechanism in the game as it helps keep the game moving as players are generally making simultaneous turns but there is still a bit of drafting strategy at times.

That’s Noch Mal/Encore. Bravo adds a seventh die, which gives you a special ability. Each of the six sides do something different, but suffice it to say most of them let you check off boxes in slightly different ways. There is also a heart icon which, if you choose, will increase the points you get for future columns you complete. You start the game with the ability to take the special die once, but as you fill in boxes on your page you’ll unlock more.

You also score points for completed rows in Bravo and if you are the first for a given row you get a special ability immediately, giving you a bit of combo potential. The game ends when any player has completed their second color bonus and whoever gets the most points is the winner.

Roll-and-writes (and similar games using cards of some variety) continue to be pumped out with reckless abandon. At first I loved being the guy who signed up to review these games. Somewhat similar to trick-taking, they all share a core but there is so much variety that makes them often feel incredibly different. But unless you just have a group that wants to play only these types of games it’s hard to know how to recommend them for your collection.

Well the easiest place to start is comparing Bravo to Encore, it’s a very direct predecessor (which I already liked). Bravo is heads and shoulders a better game. The special action die and row bonuses give you more options and since you have to reach certain places on your grid to unlock more special actions, it compounds pretty quickly in terms of the number of things you have to consider.

This can also lead to some really fun turns where you complete a row, get a power that completes another row and gives you more powers or columns for points. It isn’t quite the level of the “Clever” series of roll-and-writes in terms of combinations you can chain together, but it’s almost more rewarding when it happens because of how rare it is.

Bravo does take a little longer to teach than similar games. The special action adds some time to teaching the game as there are now six special abilities that you have to explain. But still, the game can be taught to a new group in under 10 minutes.

Compared to the glut of other small box roll and write games, I actually think Bravo really holds its own. The depth isn’t necessarily apparent right away, but I’ve continued to feel like I’ve got a better feel for making my turns as efficient as possible as I’ve got it to table a few more times. I also tend to like drafting of dice and Bravo has a sort-of draft where the active die roller gets first dibs and limits the choice of every other player.

The special actions really up the strategic level of the game. You are limited to how many you can take. Sometimes they can help you finish off hard to fill spaces. But taking the heart special action early can give you lots of points as you finish columns.

Everyone in the game does fill in the same grid. And there is no variety there. I think an additional option with perhaps other layouts or bonuses could have provided a bit more value and variability for those that really like what the game has to offer.

All in all, I have enjoyed my plays of Bravo. It certainly is an improvement on Encore and if you enjoy this genre of games I can’t imagine Bravo not being well received. There is nothing groundbreaking here though. In fact, it’s 90% the same game as Encore. But I really love how the game implements a partial draft where the active player gets first dibs and everyone else chooses from the remaining. It keeps things moving but still adds some tension throughout.

Is this game winning any end-of-the-year awards? Probably not. But Bravo is thinkier than you might imagine, easy to teach, and is for a $25 MSRP, it’s certainly worth getting it for a few plays.

Final Score: 3.5 Stars — A solid roll and write with a modified drafting mechanic and lots of special powers.

Misses:
• Only one grid in the game that is played repeatedly