We review Bosk, an abstract strategy game published by Floodgate Games. In Bosk, players are placing trees and leaves on the board trying to score the most points in various phases. 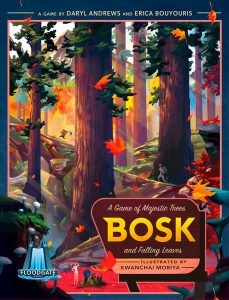 Deciduous forests contain trees and shrubs that shed their leaves annually. Leading up to this abscission, water and mineral intake into leaves is reduced and eventually stopped, causing a decrease in the chlorophyll content and an elimination of the green coloring of the leaves. The carotenoids and anthocyanins that remain behind are the compounds that give leaves their traditional autumn coloring of reds, yellows, and purples. There are theories of coevolution that believe that the turning of the leaves can act as a signal to some insects inhabiting the trees, and other theories that the color change increases the fitness of certain saplings by filtering out certain wavelengths of light…

Wait, you came here for board games, not for a biology lesson. Got it. Bosk is board game about trees. Let’s climb into it, shall we?

A game of Bosk takes place over the course of a year, divided up into 4 seasons that each represents a phase of the game. Players will plant their eight trees, watch them grow and bloom, then watch as the winds of autumn carry the leaves to the ground.

During Spring, players plant their trees by placing them on the board grid spaces, with each tree possessing a point value between one and four points. In Summer, players score victory points by having the highest total value of trees in each row and column. After this first scoring phase, player order is reshuffled so that the player in last place is now the first player.

During Autumn, the start player determines the initial direction of the wind, which will blow the leaves off trees in that direction. Autumn lasts 8 rounds, with each player selecting a tree, then placing leaves on the grid in the direction that the wind blows, by selecting a tile with a value of 2 through 8, then placing that many leaves on the grid. The direction of the wind changes each round, as does the value of tree that must be selected. The goal is to have the most leaves in each scoring area on the grid, which earns players victory points during Winter. After Winter scoring, the player with the most victory points is declared the winner.

The theme of Bosk is not an exciting one; it does not contain the flash of an established intellectual property or the excitement and adventure that can be found in almost any setting. What the theme does is give you a sense of serenity, the feeling you get on a hiking trail or sitting on the beach. It’s the feeling of experiencing the wonder of nature that we are fortunate to be able to experience as the seasons go by. This theme, while not outwardly having glitz and glamor, suits the gameplay of Bosk perfectly. When you play, there is not a feeling of stress or urgency that can be tangible in other board games. Analysis paralysis and strategic decision-making are definitely present, but there is a calmness to the gameplay that makes the experience unique among strategy games.

There is a surprising amount of depth in Bosk, with players having to plan out their decisions for two different scoring phases that have separate criteria for scoring points. While both the Summer and Winter scoring phases are based on area control, the placement of the trees and the selection of which trees shed their leaves require an ever-evolving strategy, based on the direction of the wind and the choices of both you and your opponents. We found Autumn to contain the most compelling gameplay, as the consequences of your actions become more and more limited until you are left with only one action to select in the final round. As you play, the game feels as though it builds towards a crescendo, albeit one that all players can see coming and predict the outcome.

The drawback of being accessible and rules-light is that the depth may not be enough to satisfy all abstract strategy fans. While every choice in Bosk has a consequence, players who are looking for an extremely complex game may be left wanting when this game hits the table. The other consideration is that because it is so rules-light, it may lead some players to feel that they can play impulsively and loose. Quite the opposite, as poor tree placement in spring can severely limit options for scoring in the second half of the game. Bosk rewards balance in all aspects of gameplay, which can be frustrating for certain types of gamer mentalities.

We are always on the lookout for accessibility in game production, and Bosk simultaneously shines and falls short in this regard. Each player has their own tree species, with all the game pieces and components for each player having their own unique shape and design, which is perfect for players who have difficulty discerning colors. However, the game board itself is rough in terms of color choice, for both unimpaired and impaired vision. Kudos to the production team for the art, but an updated and more carefully curated color palette could go a long way to making this game accessible to all. That said, the wooden leaf tokens that are used in Autumn are top-notch and give a boost to the quality of gameplay and table presence of Bosk. The game itself is visually stunning, drawing the eye of passers-by as the leaves blow across the board.

Bosk is a solid abstract strategy game that is simple enough to teach to your family, but deep enough to please the average gamer. While abstract area-control specialists may find the game less complex than they usually like, Bosk provides enough in the box to keep players coming back for more.

Final Score: 3.5 Star – A quiet board game, as peaceful as the falling leaves in autumn.

Misses:
• Does not reward impulsive choices
• Can be harsh on players who make poor choices early