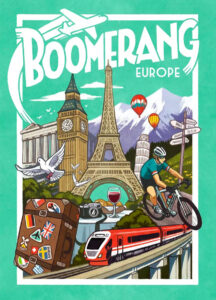 Fill in the blank: [BLANK]-and-write. Hopefully, readers will have guessed that the blank is meant for any suitably random or choice-driven mechanism. Roll and write immediately comes to mind. Flip-and-write could be an answer. Even spin-and-write is a possibility. For our next game, the word is “draft”. Players will be selecting a card from a hand of cards, passing the hand, and then the end of the round brings the writing.

As far as this reviewer can tell, Boomerang (the pictures show Boomerang: Europe) is the first game to feature this combo mechanism. It’s a light travel-themed game of drafting and set collection from well-known and prolific designer Scott Almes. Even though the box says 2-4 players, it’s ideal to have 3 or 4 players instead of just 2 due to the drafting.

The game has a straightforward concept, but there is a twist to gameplay which makes for an interesting choice. A standard round features players receiving a hand of 7 cards. The twist is that players select a “throw” card from their initial deal and place it face down. This card scores just like others described later, but it also scores bonus points depending on your “catch” card which is the last card in hand in the round. Players will score points based on the numerical value difference between their throw and catch.

The rest of the point generation comes from the multiple set collection symbols on the cards as below. The various versions of Boomerang mix these up, but each version functions like the others, just with different icons and set names.

For Europe, the scoring opportunities are:

After 4 rounds, players add up all points on their sheets and the traveler with the most points wins.

It’s a simple game, but like the simplicity of fillers such as Sushi Go and No Thanks, it’s the simplicity combined with tough choices that sticks with players. Boomerang is fantastic, especially as a travel game. It’s the repetition of simple choices with slightly deeper impact that make it such, something that players generally ask for when traveling. It’s just enough of an attention grab to take players’ minds off the scenery.

The one major let-down in the mechanisms is the eponymous throw-catch mechanism. Sure, it feels thematic when paired with the original Australian theme of the game, but in other geographies, the publisher could have dropped in some other semi-thematic mechanism. In addition, the randomness of the choice seems to make it more of random points than something that can be planned.

Many times, this reviewer feels that lighter, shorter games get more critical review impressions from consumers and other reviewers. Rather than expecting too much from filler games, this reviewer feels that how well the game fits its purpose to fill the time with “gaming” is more important than the weight of its mechanisms. For that, Boomerang deserves high marks. Instead of aiming for novelty, Boomerang aims simply for a fun, family filler to enhance non-gaming settings. Whether that’s an evening of avoiding doom scrolling or a train trip across Europe, both feel right to bring out this game.

Overall, Boomerang (any version so far) is a great investment right before a trip. It’s just a small deck of cards and a scoring pad. For even more enjoyment, keeping track of scores between games with the box lid is pretty mandatory as a memento of a trip. Even though travel isn’t something a lot of people are doing now, this reviewer feels like adding a copy of this game to a collection in the hope of making that trip is well worth it. Even if that trip is just to game night outside the house.