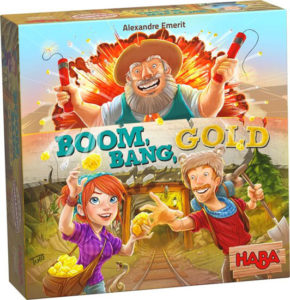 If you are a gamer with young ones at home, I’d imagine that you are always on the lookout for new games to play with them. This is especially true if your kids are still playing mass market games like Trouble or Sorry. Thankfully, game publisher HABA is here to rescue us. With excellent titles such as Rhino Hero: Super Battle and Karuba, they not only make games that are fun for kids, but for the adults playing with them too.

And now they are bringing us a new offering in Boom, Bang, Gold. Set in the Old West, Boom, Bang, Gold will have players using dynamite to try and find gold hidden in the mountain. This one has some easy to learn rules and solid production values. But is it fun? Let’s find out.

Games of Boom, Bang, Gold are played over 12 rounds. To setup, all the mountain tokens are placed facedown in the box. Some have gold on one side while most are blank. Each player gets a stick of dynamite (made out of wood) and a character to hold their gold tokens.

A Round of Boom, Bang, Gold takes place over 4 phases:

1. Blast: Each player tosses their stick of dynamite into the box. The bottom of the box is somewhat elevated, so when the dynamite hits, it causes the box to bounce, flipping some of the mountain tokens.

2. Gold Search: On the say of go, each player now tries to grab as many FACEUP gold tokens as they can. There are rules, like only grabbing one at a time or using just one hand. If a player sees a special tile with their symbol (an animal), they can call it out and all the other players have to stop for a second or two. There are also four actions tiles that can be grabbed if they are showing.

3. Actions: If a player grabbed one of the four actions tiles, they get to take the associated action. These will have the player gaining an extra turn to grab tiles, or stealing gold from other players.

4. Secure Gold: Any gold players have (that wasn’t stolen) is placed in their chest, safe for the rest of the game. The action tiles are then returned to the box face down.

Then the clock marker ticks up to the next number and the round repeated. After the 12th round, the game ends and the player with the most gold wins.

Much like the arc of the dynamite being thrown into the box, games of Boom, Bang, Gold have their ups and downs. Straight off the bat, the players (kids and adults alike) enjoyed throwing the dynamite into the box. In fact, the kids seemed partially enthusiastic about it. So much so that tokens would regularly fly out of the box. Thankfully, HABA Games has a very liberal replacement policy for lost or damaged components.

Other than collecting gold, the two other types of tokens aid in keeping the game a bit more interesting. More so with the action tokens than the animals though as we found the animals to be minor distractions at best. With the action tokens though, I initially worried that explaining them would be difficult for the younger players to grasp (age 7). However with only four of them in the game (out of over 100 tokens) they came up rare enough to not be an issue. In fact, after one or two rounds, even the youngest player knew what they meant.

Speaking of rounds, I feel like Boom, Bang, Gold goes on a bit too long for what it is. Near round 8-9 we had grabbed most of the gold out of the box, so the rounds became a little lackluster and repetitive. In future games, I would probably house rule the game to end at 9 rounds instead of 12.

Some HABA games have the potential to be crossover titles that you can play without your kids. Not surprisingly, this isn’t one of those. While the production values are great, the game play just isn’t going to excite you too much as an adult. It’s a fun game to play with your children (and better than just about any mass market game), I don’t see you reaching for this one while they sleep.

However the kids did all thoroughly enjoy this game, especially the aforementioned dynamite throwing. In fact, I had to keep an eye on the younger kids, as they got a bit too “enthusiastic” about grabbing gold tokens and broke the rules many times.

Boom, Bang, Gold can provide some fun and exciting moments, however it also tended to wear out its welcome a little too soon. While all of the kids we played it with enjoyed it, most were ready to play something different afterwards (yet all were willing to play it again later). Boom, Bang, Gold is fairly unique, has some great components, but clearly isn’t the deepest of games. Since it doesn’t have the crossover appeal as some of HABAs other games, this one probably isn’t going to make it to the table all that often. Yet it does work well for a fun and energetic diversion.

Final Score: 3 Stars – A fun game to play with your kids, however it does go on for a little longer than we would like.

Misses:
• Can wear out its welcome a little too soon
• The animal rules were just OK