We review Blueshift, a scifi war game that will have players moving through the stars and taking over planets that will give players the feeling of the old Axis and Allies board game. 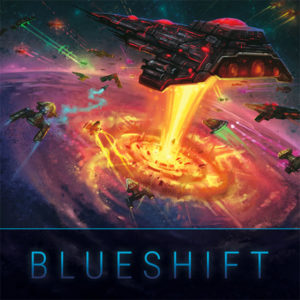 Every game, much like every work of art, is influenced by a variety of sources. Games can take influence directly from books, movies, TV, and/or comics. They’re also be influenced by other games and the various mechanisms that bring energy to those games. And with each review, a good reviewer is looking for those influences to understand the nature of the game.

Blueshift is a game that is full of influences. It’s a space opera wargame for 2 to 6 players that plays in about 45 minutes per player. To get the best experience, between 3 and 5 players is necessary.

A game of Blueshift begins with laying out the hexagonal space tiles. Some of these represent planets with attributes of Prosperity, Population, and Defense. Other tiles represent various space anomalies or just empty space between the planets.

The players begin equidistant from each other on their own species home planet. Each species has a couple of special abilities, but the ship combat stats are mostly equal. The attribute values of the home systems can also differ slightly.

During each round of the game, each player takes a turn that has the following phases:

Play Action Card
Players will have a hand of five action cards. At the beginning of their turn, they must play at least one of these. They have varying effects, mostly to buff or debuff planet stats or gain money for the player. They function mostly like event cards.

Collect Tribute/Income
The second step of a turn is to gain money equal to the Population + Prosperity values for all planets under a player’s control. If they have a trade alliance with that planet, it’s just the prosperity value.

Ship Movement
A player can move each ship one space with the exception of Scouts which move 2 spaces. Unflipped tiles become discovered when a ship moves onto it. There are some other potential modifications to movement from some tile effects.

Space Battles
If a player’s ships are in a hex with enemy ships, a space battle occurs. The combat system here is similar to Axis & Allies combat rounds, with each unit rolling a 6 sided die trying to roll a target number or higher to hit. The rolling player selects casualties beginning with any ships that are equal to or smaller than the firing ship.

Land Battles
If a player has a ship on an enemy or neutral planet space, they may try to invade by rolling higher than the planet’s defense.

Purchase and Repair Ships
Once every other step is complete, a player may pay money to buy new ships or repair ships at certain locations.

The game winner is the player who can collect 16 victory points. Three points are gained for each planet controlled and one point is gained for each trade alliance or space station built.

In one sense, Blueshift has a lot going for it. It’s a simpler space combat game than other big games and it has some of the same features. It focuses more on combat but there are moments for out of game diplomacy. The element of discovery is also high and being lucky enough to find valuable planets close to home systems makes a big difference.

However, the main thing dragging the stars down in this game is the overwhelming feeling of playing a 1980s wargame. The main design elements are all reminiscent of Axis & Allies. This design functions, but overall, does not benefit from a hidden map and lacks some of the economy elements from other games that make the overall package engaging.

In addition, there is lots of luck between the exploration elements and the dice rolls. This is not to say that other games don’t have the same issues, but certain single die rolls, namely trade negotiation rolls, can have a huge impact on a player’s success in game. The catch up mechanisms provided also don’t have the intended effect because they’re also based on a player acquiring them randomly.

Adding to these unfeatures is long downtime and an overall plainness to the cardboard ships. While it’s understandable a publisher wants to avoid a high price tag, the cardboard just doesn’t have the same fun as miniature plastic ships.

Blueshift starts out well with some great art and tiles that really deliver on the theme. The gameplay is simple and straightforward mostly. It’s just that this has all been done before. The complete package feels like a nostalgic romp delivering a space game drawing major influence from the 1980s (with authentic cardboard even!). While that may satiate the regular Saturday war game crowd, Blueshift lacks a punch for this reviewer interested in more developed games.

Final Score: 2.5 Stars – A quality space game product is marred by a sameness and been-there-done-that design.

Misses:
• Catch up mechanisms are luck based
• Lots of luck
• Down time