We review Blossoms, a two player filler game that takes about 15 minutes to play. In Blossoms, players are growing and cutting flowers trying to earn the most points. 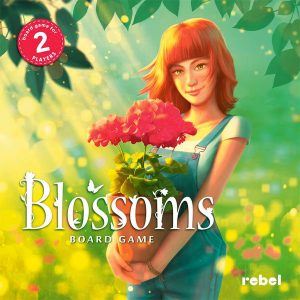 Mistress Mary, Quite contrary,
How does your garden grow?
With Silver Bells, And Cockle Shells,
And cowslips all in a row.

In Blossoms you’ll compete to grow the most varied and tallest flowers in the garden. Blossoms is a light 2-player game that takes about 15 minutes to play.

The Garden is constructed in between the two players, consisting of a row of flower pots from which flowers will grow. The deck is placed next to the pot, and flower cards are flipped and ‘planted’ in each pot. Players start with two cards from the deck and 3 special action tokens.

Players then take turns gardening. On their turn they must start with a growth action – flipping a card and adding it to a pot containing the same flower. If they can’t do this (no corresponding planted flower) their turn ends.

If they can continue, they can choose to take another growth action, adding a card from their hand, or cutting the flowers, collecting the set for scoring later. The special action tokens are used to prevent the other player from cutting and collecting a pot, or to use the special action designated on the pot.

A player’s turn either ends when they decide to cut flowers or when they’ve done a growth action that couldn’t be completed. The game ends when the final card is drawn. Victory points are awarded based on the size of each cut flower as well as for different sets of flowers collected. Highest score wins.

I haven’t met a game with a plant theme that I didn’t immediately take home. Blossoms was no different. It has a lovely art style and there’s just something sweet and wholesome about playing competitive games about growing things. Like others of this particular theme, I’d hoped for an ‘angry trees vibe’ (Photosynthesis, Bosk, Arboretum). Unfortunately, it’s just a little too light for you to feel like total domination or annihilation is much more than a lucky draw.

Originally published as Kwiatki in Poland, the rulebook is well translated. That being said, there were a few clarifications (when the fence pot action takes effect and when a token goes into effect) that just weren’t clear in either language. It’s interesting that the game was developed at a cyclical board game designers’ workshop and I’d love to see a little more about that included in the rulebook.

The fun of the press your luck element is somewhat dulled by the ‘bad luck’ element. It’s absolutely possible for one person to get 5 or 6 bad draws in a row and watch their opponent’s plant grow away. This isn’t press your luck, it’s more try not to flip the table. Adding a special action that would allow you to bypass the bad luck on the first draw would make for a more balanced game.

Pot actions range from ok to kind of overpowered. In particular, the fence timing isn’t clear, but the ability to stack three random cards with the watering means HUGE points.

While the art is lovely, the one thing the game could really use is more variety. With only 6 types of flowers and 4 pots, a lucky gardener can grow several tall flowers in a single round, save one for themselves, and clip the other.

The advance variant doesn’t designate which action should be first and this is the superior way to play – it removes the chance that a player might not have an opportunity to play at all and makes the game somewhat more strategic with press your luck elements.

Blossoms is a lightweight, push your luck game with lovely art but a few flaws. A clearer explanation of the timing of some actions would be helpful. Blossoms becomes a solid game of strategy and press your luck when you use the advance variant rules. More card variety and the addition of a ‘get out of jail’ type special action would go a long way to help its flaws.

Final Score: 2 Stars – Gorgeous art, and nice variant, but just not enough strategy or game mechanics in the standard game to make this much more than a pretty game of who can draw better cards.

Misses:
• Far too random
• Special abilities make the game swingy
• Lack of card variety can make for one sided game