We review Bloom, a flower themed roll and write published by Gamewright Games. In Bloom, players are trying to earn the most points by using die results to fill in their flower sheets. 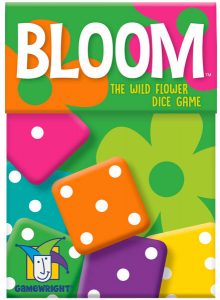 “I want to be a lady in a flower shop instead of selling at the corner of Tottenham Court Road.” ~ Pymalion

In Bloom you run a flower shop, preparing lovely, fresh-cut floral arrangements for waiting consumers to enjoy. You’ll get to choose who you create bouquets for, but with only have so many shades of flowers to go around so you’ll need to do some careful planning. Customers become unhappy when you start filling in their nosegays and corsages with different colored blossoms but satisfy enough of them quickly and you may wind up with some nice bonuses!

Bloom is a roll and write game for 1-5 players that plays in about 20 mins. It plays best with 4-5 players.

To start, players are each given a random game sheet and a writing implement. The start player rolls the 6 dice. From this pool, players will take turns choosing a die based on their color and number, and circling the corresponding flower groups on their sheet. For example, the dice are rolled and a player chooses the yellow die showing 4 pips, and then circles four yellow flowers on their game sheet. Each player chooses one die from the pool (two in 1 or 2 player) then the next player rerolls all dice.

Player sheets are divided into 5 beds of 12 flowers. As soon as a player circles all the flowers in a bed they can circle the next available number in the bed scoring section. Additionally, as soon as one player has circled ALL the flowers of one color in a bed they can shout “Bouquet!” and circle the highest number of that color in the scoring section, with the other players scratching it out.

Players must choose a die each round. If a player ever has to circle flowers not of a die’s color to complete a bouquet, they’ll add a tick to the unhappy consumers box and lose points at the end of the game.

I’m a big fan of roll and writes in general and I haven’t met a plant game I couldn’t find some reason to like, so Bloom was a natural fit. Like most roll and writes the general mechanics are quite simple – pick a die, circle something that matches.

Varying player sheets give this a little twist, and you might not find yourself fighting with your opponents for dice as much as you think. Much of the “fudge, we all need a purple 5” is gone. While this may make the game seem somewhat solitary, the twist is that you’ll have little way of knowing who is completing what until someone yells BOUQUET. I thought this was kind of fun—it took the onus off hoping you were lucky enough to be in line for the right dice and instead made a player focus directly on optimizing their own player sheet. That being said, at lower player counts things can seem to fill in too fast.

The sheets are small, but there is very little info that needs to be on them. The box is actually the size of the components (instead of being three times larger for no reason) so this makes a great addition to a day bag or purse for play outside the usual game space. I also liked that its a magnetic fold box and not a tuckbox, which not only makes it sturdier but also easier to repack. I also thought that changing the shape of the flowers for each color could improve its accessibility.

The rulebook boasts a lot of pictures as examples, which is very helpful for players new to the genre. Oddly, the rulebook lists 1-5 players as the range, but the box lists 2-5. Regardless, I found the solo play to be a bit lackluster–there’s not so much strategy here that besting your score more than a few times is enjoyable. On the other hand, at 4 or 5 players this really shines both for its easy to learn and casual, but still somewhat competitive nature.

This little flower-filled roll and write is a summer delight. If you’re looking for a simple game that the entire family can enjoy while waiting for dinner at your favorite eatery, Bloom is it. The clever, appropriately sized tuckbox is both environmentally friendly as well as perfect for a purse or picnic basket. Different player sheets change the object from ‘can I get the best dice’ to ‘how do I fill out MY score sheet the best,’ (echoing some of the better games in this genre). Clear pictures in the rulebook help with learning, but a little change in the flower shapes might improve readability in Bloom.

Final Score: 4 Stars – Good things come in small packages. Easy to learn with a focus on play your own board over cross fingers for the best dice.

Hits:
• Great packaging makes it easy to put away and carry with you
• Clear rulebook
• Changing player sheets put the focus less on dice and more on your ability to plan

Misses:
• Not good at all player counts
• Aesthetic and readability could be improved with varying flower shapes