We review Blockbuster, a party and trivia game inspired by the icon of movie rentals. Published by Big Potato Games, Blockbuster has players testing their movie knowledge. 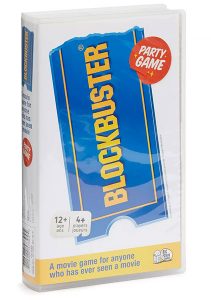 To this day, one of my favorite jobs was working at Blockbuster. During senior year in college, I got exclusive access to pre-releases before their street dates and as many older library films as I wanted. It seemed like almost daily I was consuming new shows I’d never heard of, checking out indie recommendations from co-workers, and discovering foreign cinema. It really was as good as it sounds.

So when I strolled through the massive hall at GenCon this year and saw a booth set up as a Blockbuster store, I stopped and gawked for a hot minute. If you had the pleasure to see this, it was quite accurate, down to the shoddy computer used to check out movies and pay late fees. Blockbuster seeks to present a party game that combines aspects of Trivial Pursuit, charades, and movie knowledge. Will you “Make it a Blockbuster night,” once more or should the credits keep rolling?

Blockbuster from Big Potato Games is for movie lovers aged 12+ and requires 4+ players. Runtime is 30-60 mins.

The goal of Blockbuster is to be the team that collects all eight genres of movies, kind of like Trivial Pursuit except less daunting. Players will separate into teams as evenly as possible. Get the board out, buzzer and separate the two decks of movie cards and head-to-head cards. You’re all ready to go.

Each turn has two rounds: the head-to-head round and the movie round. During the head-to-head round, teams will select one player from their teams to compete in naming as many movies as they can from whatever category is revealed from the deck. So for example, if my head-to-head category was movies with dinosaurs, you bet your bottom dollar the first movie title I’m going to name is Jurassic Park. Whoever answers first will hit the buzzer, which starts the 15-second timer. If the other player is able to name another movie they will hit the buzzer to reset it. Players will keep trading blows until one person eventually gets stumped. Whichever team is the winner of that round will have an advantage for the movie round.

The winner from the head-to-head round draws six cards from the movie deck to start the movie round. They keep three for themselves and giving the rest to the other team. If a team manages to guess all of their cards, they can start on their opponent’s movie cards. Players will try to get their teams to guess movies they have drawn by using “one word” (just like it sounds), “quote it” (a quote from the movie), and “act it” (essentially, charades).

I got to play this over the holidays with family and we had a really good time. I competed against my sister, who is very much like me when it comes to movies. Yes, we are those annoying people who quote the movies we’ve seen too many times while we watch them. Watching Willy Wonka is probably unbearable with me. The first time we played was with four people. I felt like that player count can work if the teams are somewhat balanced with movie knowledge. But it can get frustrating if your teammate keeps guessing actors instead of movie titles. Not that that happened to me a couple of times. We had a much more enjoyable time with six players and I felt like that evened things out a bit. So I’d recommend your minimum be six unless all four people willing to play are movie buffs.

Even when there are those differences in movie knowledge, I felt like there were enough possibilities for people to step in, guess a movie correctly, and feel like they were still having a good time. Certainly playing with a higher player count means that individuals with limited knowledge won’t have as much pressure put on them. Having the ability to steal your opponents’ cards also helps make up for shortcomings on your movie rounds and helped move the game along. Players aren’t just waiting for the game to give them their eight needed cards on their turns. This also created a little bit of strategy. If I have the advantage during the movie round, and one of the genres that comes up is one that the other team needs, I’m likely not going to give that to them. I definitely don’t want to help their chances to steal from me.

The game requires there to be a minimal amount of movie knowledge. In that regard, Blockbuster might not be quite as accessible as most party games that require just your participation. If you ask a person that has no knowledge or interest in movies, I don’t think they will like this game. However, I think most people should be able to contribute something and still have an enjoyable experience.

One thing that happened during our games which I didn’t expect: we exchanged fond and funny stories about our movie store experiences, from outrageous late fees to wondering what was behind those swinging doors. With these stores all but gone, this was a welcomed and fun reminiscing down memory lane and made me a little sad to think I won’t have the chance to take my kids to a movie store to pick out a Friday night feature.

Blockbuster infuses the nostalgia of the movie store experience and cinema knowledge to present a party game that’s a surprisingly enjoyable time. If you’re a movie buff or just enjoy movies and love party games, this is one worth checking out.

Hits:
• Not just a boring Trivial Pursuit movie-themed reskin.
• Stealing cards help speed the game up and offers some strategic choices.
• Allows those of us that went to movie stores to talk about “the good ol’ days”.