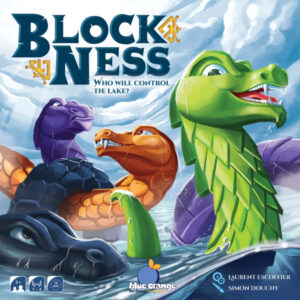 One look at the cover of Block Ness and you’ll think you know what you are getting into. Somewhat cartoony-looking Loch Ness Monster-ish characters adore the front with the tagline “Who Will Control the Lake?” This must be an area control game targeted at families, right?

Well, intrepid reader… kinda. It’s definitely a dressed-up abstract game rather than area control. Simple rules make it accessible for kids but maybe isn’t really best for the younger side of gaming demographics. So let’s discuss exactly what we are battling for and if it’s a game for your collection.

Each player will choose a color and take the corresponding head, tail, and 10 body pieces for their monster. Every colored set is slightly different in terms of the height and span of each individual piece but generally has the same distribution. To start the game each player will place their shortest (in terms of height) piece on the board and place their head on one end and tail on another.

Then, on your turn, you will place another piece starting adjacent to either your head or tail. The piece must go in a straight line but can go over previously placed pieces, so long so you don’t go over an opponent’s head or tail. You can also never go under a previously placed piece. The goal is to place all your pieces so you’ll want to keep in mind how to give yourself options while limiting the options of the other Nessies involved.

Block Ness accommodates 2-4 players and the scale of the area is color-coded based on player count. With two players you can only place your pieces in the center dark blue area. You expand into the other shades as you add new players, giving more space to be able to build your monsters.

If you cannot play a piece legally, you must pass. When all players can no longer play a piece, the game ends and whoever has placed the most pieces wins. If there is a tie, the player whose head is tallest is the winner.

Block Ness is certainly not just the family weight game you’d expect from looking at the cover. Certainly, the rules are simple enough that most 8-year-olds would be able to pick it up without issues. And they may be happy enough to place pieces trying to keep their monster alive as long as possible.

But there is a bit more depth here than you might get from that experience. Like any good abstract game, the beauty of Block Ness is when you stop thinking about this turn and are thinking about the next two or three turns at a time. Every piece you place can work as both an aggressive move to block out your opponents and a defensive move to secure more space for your future turns. Your tallest pieces can’t be jumped over by other players and can be useful to try to rope off a bit of real estate. But doing so might cause everyone else to immediately head that direction before it’s too late.

These interactions also depend a lot on the player count. I prefer Block Ness with two players. It just feels more like your plans actually make a difference when there aren’t three other players acting before it gets back to you. It is more a strategic battle where you can keep an eye on your pieces and their pieces and try to make some educated guesses about their next moves. When you introduce more players into that the strategy leans a bit more to organized chaos.

There isn’t a lot of emergent strategy in this type of abstract game though. It plays quickly, the whole thing takes about 15 minutes, and you very well may find yourself setting it up a few times in a row to try out a different tact. But ultimately every play will come down to careful positioning and placement. In most cases, especially with two players, you’ll find most often everyone gets all but one or two of their pieces on the board before everything is blocked off.

Block Ness is a solid abstract game that certainly has more strategy to it than you’d guess by the cover. It’s well produced and looks great on the table. If you are a fan of abstracts this might be one to use to introduce younger gamers to as the rules are incredibly simple to teach and might get kids to start thinking a bit deeper than the surface after a few plays.

For well-aged gamers, I’m not sure Block Ness has a ton of staying power. The strategy is a little deeper than you may find in your first game. But after a handful, there doesn’t feel like there is a lot left to explore. The only real way to win is to control as much territory as possible and you only have 10 pieces to use to make that happen. It’s well made and looks great though.

Hits:
• Easy to teach and, while it works for kids, has enough for adults to enjoy
• Great table presence with Loch Ness monsters diving in and out around the board.

Misses:
• Only really one strategy available so most games feel pretty same-y.