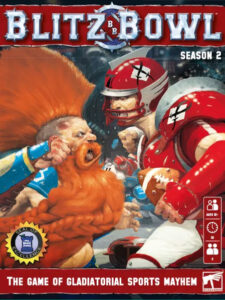 The first sports game I ever played was the Blood Bowl: 1st Edition back in 1986. The game was good but not great. It had cardboard standees, and clunky, slow gameplay. It was not until 1988 with Blood Bowl: 2nd Edition that the gameplay became more streamlined and had cooler team minis. My group and I were able to get a few seasons of league play under our belt before we graduated. Unfortunately, we all went separate ways and so did our time and money. Over the years, I’ve tried to revive any Blood Bowl interest but due to the time commitment of playing a full season, I just didn’t have any luck getting it back to the table.

This brings us today’s review of the Blitz Bowl: Season 2 from Games Workshop. This version pits 2 players using small teams and a faster style of gameplay. Does playing a fantasy football-like game sound like fun? If so, then read on!

Blitz Bowl: Season 2 is supposed to be like Blood Bowl minor leagues where owners are looking for their next star or body. The game comes with miniatures and player cards for a Human and a Dwarf team.

Each team is made up of 6-positions: 3 lineman and 3 special players. Each player card has move, throw, and armour save values with some players having a special ability. The human and dwarf special players range from: Blitzer, Catcher, Thrower, Runner, and Troll Slayer.

Blitz Bowl is made up of rounds and each coach (player) takes a turn that is made up of 3 actions divided amongst their team of 6 players. Each player can take the following actions depending on their status but players cannot repeat an action.

Other than scoring a touchdown (worth three points), the main goal is to try and claim a Challenge Card. These cards grant game points (ranging from 1–2) as well as bonus plays. After a turn is completed you discard the rightmost Challenge Card and then fill any missing so there are 3 at the start of each turn.

The game will end immediately if one teams’ score exceeds their opponent’s score by 10. A game will also end when the last Challenge card is dealt. In this case, the team with the highest score wins.

It should come as no surprise if you’re familiar with Games Workshop games that the Blitz Bowl: Season 2 production values and minis are top-notch. Yes, you will need to build these unpainted minis but once you remove them from their spruces and push-fit them together they’re awesome. The mini’s detail and the customizable options all make the game feel like any work you put in is worthwhile. The rulebook includes assembly instructions as well as examples of what final painted minis can look like and what colors to use. Plus, the board, cards, and rulebook are all top quality and like the minis have excellent design details.

What did surprise me was that the Blitz Bowl: Season 2 gameplay is rather streamlined. It’s very smooth and fast. You will need to absorb the rules and maybe have one learning game to get a feel for it but then it’s tons of fast fun. These smaller teams give Coaches fewer players to use so turns go by rather quickly and generate little game downtime. Since the 3 actions a Coach can use are bound by a player’s status this creates fast decisions and gameplay which is what you would expect with a game named Blitz Bowl.

I enjoy games that have multi-use cards and Blitz Bowl: Season 2 is no different. Challenge cards can be claimed after a coach’s action if they meet the prerequisites like scoring a touchdown, knocking down an opponent, taking possession of the ball, etc. Once claimed, that coach not only scores points but also gains bonus plays that provide free or additional actions to your players and/or team. These are vital to claim since gaining additional actions or abilities is key since you’re only given 3 actions per turn. Challenge cards are a well-designed component that fit perfectly into Blitz Bowl.

I have to say what impressed me the most about Blitz Bowl: Season 2 is that in addition to the 2 teams I mentioned above, the game comes with a total of 13 teams to play. Now, the game only comes with Human and Dwarf minis but you can use proxy figures or do what I did and break out your Blood Bowl ones—the Gouged Eye and Darkside Cowboys are back! Each team has different positions and special players giving the game a huge amount of variety and replay value that anyone should love. Ok, the goblin team only has one position but it’s the only team with 8 players and surprisingly was a ton of fun to play.

The only thing holding back Blitz Bowl: Season 2 from scoring a perfect 5 for me is the rulebook. There are some details that are buried and might not be organized in the best of places. The hand-off rules for example were referenced on a Challenge Card. I recall reading about them but took me forever to find them buried in the throw action section. This is not the best section to place the rule because you don’t throw a hand-off but bold text or a subsection for this would have made more sense. Another example of poor placement was the drill cards. These were helpful in learning and teaching the game but were highlighted in what seemed like flavor text in the set-up instead of called out in their own section.

I must admit that I had hoped that Blitz Bowl: Season 2 would be a good game but it ended up being a great one. It will not shock many that Games Workshop gives you another game with excellent production values and highly detailed miniatures but what should surprise most is Blitz Bowl: Season 2 has the fast, streamlined gameplay that you always wanted in Blood Bowl. The Challenge cards are excellently designed multi-use cards that work well into this fast-paced game and the 13 unique teams provide a huge amount of variety and replay value.

My biggest issue with Blitz Bowl: Season 2 is the rulebook which is mostly ok as is but some key rules and elements are poorly organized and some oddly placed. The rulebook could use some work but overall is not a dealbreaker for me.

Misses:
• Not the best rulebook