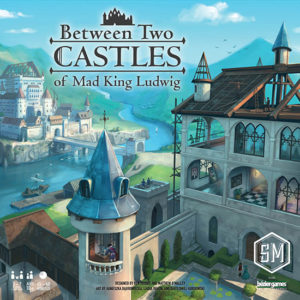 “Here. Review this,” said Tony as he tossed a game at my face while feeding his twins.

“What is….Between Two Castles of Mad King Ludwig? Wait, WHAT?”

Between Two Castles is a semi-cooperative tile drafting, castle building game for 3-7 players (with a 2 player variant) that takes about an hour to play.

The game will last two rounds that play out as follows:

The only difference in the second round is that tiles are passed to the right and picked up from the left.

I was VERY surprised when Between Two Castles showed up. Then my emotions moved to intrigue. What would the game be like? How will they work together? Could Stonemaier and FFG do this with Scythe and Eldritch Horror???

I know what you are thinking: does the combination of two good games work? My short answer: mostly.

To begin with, I love the new building options! Instead of building within the rigid grid rules from Between Two Cities, you build your castles however you want. Placing tiles follows some basic rules such as they must share an edge and you cannot build above ground tiles below ground (or vice versa). However if you want to win, you will need to pay attention to which tiles are in your castle and how they are placed.

This is probably where people will either like or hate Between Two Castles.

The seven room tile types all score differently. To complicate matters, most types score differently within their own type. For example, Outdoor tiles score 1 point for each of a specific tile type in the castle. Some score on the number of Food tiles while others score on the number of Utility tiles. Downstairs tiles score based on matching a tile type anywhere in its column of tiles. As you can see, it is more involved than its predecessor.

I loved this part of the game. Do you want to place the Sleeping room tile early and risk not maximizing its points? Should you place an Outdoor room tile because it will score the three Sleeping tiles in the castle, even though you can no longer build upwards in its column? There is also the risk/reward analysis that is needed because the value of these tiles can change based on future tile placements. But wait, there is more…

You also get a bonus for placing the third tile of the same type. These bonuses come in several forms, from immediately adding a new room or specialty tile (Fountain, Tower or Grand Foyer) to your castle, to drawing a bonus card that will score at the end of the game. This complicates (in a good way) deciding what tile to place because you may want to place a third Food tile, even though WHERE you place it will get you no points, just to earn the bonus. But wait, there is more…

Every tile has one of four symbols in the top right corner representing wall hangings in the room. These will be scored by either the Corridor room tile or the bonus earned from placing three Living room tiles. When you have two of the same room types in your hand, you will want to pay attention to which wall hanging it has so you can draft the one the one that will potentially score you more points. This presents another variable in evaluating a tile’s worth.

As you can see, scoring is significantly more complicated in this game. It is also more random because each room type scores differently based on the tile you have.

What makes it more difficult, and this was a universal complaint from everyone who played this game with me, is that the iconography is too small and difficult to read. The bottom section of each tile shows how that tile will score. For types that score based on being adjacent to a specific room type, a tiny black square indicates where the room needs to be in relation to the tile you placed. Until you have played the game a couple of times and understand how each room type scores, this will be frustrating.

The complexity of the scoring, combined with the iconography, is why I stated that this combination of two games “mostly” works. It also increases the length of play and pushes the game out of the filler category. For some, that may be a deal breaker.

There are two non-gameplay items I want to mention before I wrap this up:

I liked this game. If I had to choose between the two, I would easily keep this game over Between Two Cities. While the scoring is more random, I really enjoyed puzzling through the multiple scoring options and bonus opportunities each draft presented me. I also loved the fact that the art department went above and beyond by providing unique art on every room tile. Finally, I would encourage anyone who did not like the original to still give Between Two Castles of Mad King Ludwig a chance. A couple of friends who did not like Between Two Cities were surprised by how much they enjoyed this game.

Final Score: 3.5 Stars – A deeper and more complex follow up to Between Two Cities with some great production values.

Hits:
• “Collaborating with your neighbors” mechanic is improved due to the increased depth
• Scoring, while random (see below), is more fun and engaging than the original
• All tiles have unique names and art!
• The game trays are excellent as always

Misses:
• The iconography on the tiles is too small and difficult to read
• Scoring is more random and end game scoring takes quite a while