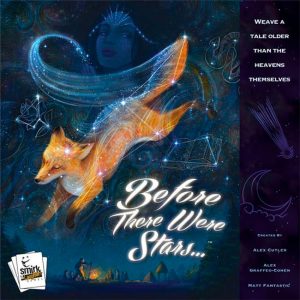 In today’s modern world, we have a multitude of ways to share stories with the world at large. Whether through Instagram, Tumbler, written blogs (like this one!) and Twitter, we have a variety of ways of telling the tales of our everyday lives. However, there is still something personal and intimate about storytelling in-person. Whether simply among friends, or in public at an event like The Moth, engaging and experiencing the art of storytelling can be a powerful one. The skill of storytellers is put to the test in Before There Were Stars, by Smirk and Laughter Games, allowing players to weave tales to impress their fellow storytellers. Does this story have a happy ending? Keep reading to find out.

Before There Were Stars is played over four rounds called chapters. Within each chapter, there are three phases that players work through to choose the components of their story, share their tale, then judge their fellow storytellers.

In the Storytelling phase, each player uses the Constellation cards they chose and cards from previous Chapters (in later rounds) to create a story. Using a prompt from each chapter (“In the beginning…” or “At the end of days…”) the players share their story with the rest of the players.

During the Appreciation phase, players award their fellow storytellers points based on their story and how well it was told. Each player has a bag where other players put in point tokens of varying denominations by passing the bag around the circle of players, allowing each player to get a score from all other players.

Before There Were Stars provides a refreshing break from the game design world where creators are looking to cash in on the NSFW-theme and social-judging mechanism to be the next Cards Against Humanity. The power of myth permeates much of the pop culture that our society tends to consume on the regular, and constructing stories from archetypes is something that humanity has been doing since spoken language was created. Before There Were Stars does an excellent job of giving players the necessary components to stretch their creative muscles within a loose framework of rules and constraints.

One of the aspects of gameplay that works well is the dice-rolling and Constellation selection. Instead of having a hand of cards drawn at random, players are given a fair amount of agency to select the components they want to use when crafting their tales. This is a better mechanism than some storytelling games that railroad you into having to add certain components into your story that may not be the best fit.

Our feeling is that Before There Were Stars is best geared towards younger gamers and families, which is supported well by the point-awarding system. By having every player receive some points during the Appreciation phase, it allows every player to feel as though they have made a positive contribution to the game. When playing with younger players, we especially like the Over The Moon point at the end, where each player can be publicly recognized for one aspect of their storytelling.

With such laurels for the theme and design of the game, it should come as a surprise that Before There Were Stars will not likely hit our table again. Not because it is a poor game, but rather that it is a poor fit with our gaming group, which is one of the risks taken by both game designer and game consumer. Titles can be excellently designed, but still fall flat if the game and the group do not sync up, and this is the major issue facing Before There Were Stars—it requires the right group of gamers for this star to truly shine.

This issue of group-game fit leads to the other issue facing Before There Were Stars, which is that it can get repetitive and boring after a few plays. Much like Joking Hazard or Cards Against Humanity, sometimes too much of a good thing is not the best.

Before There Were Stars is a great game for families with young gamers, or for creative types who love crafting stories. We definitely recommend the title to those groups who will be able to immerse themselves in the theme and title and gameplay fully. However be sure to know your audience before bringing Before There Were Stars to the table.

Final Score: 4 Stars – Well-designed, but faces the same issues many games of this type do.

Hits:
• Great theme that is accessible to all ages and interests.
• Interesting mechanic for story component selection.
• Wide variety of archetypes to help players construct stories.