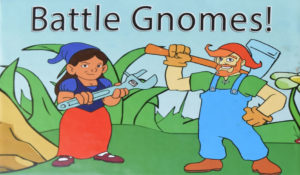 My father enlisted in the Army and was stationed in Germany for 3 years before I was born. During his time there, he bought and purchased 30+ Hummel gnomes for my mother. I grew up with gnomes inside and outside of my house for as long as I could remember. I often wondered what they did when I wasn’t looking.

Speaking of gnomish activity, today we a look at Battle Gnomes! from Branum Games, a new card game coming today to KickStarter. Players will build and battle their gnome household against opponents for control of the neighborhood. So let’s gather the troops and see what it takes to win this turf war.

In Battle Gnomes!, players will take turns recruiting gnomes, organizing their gnomes or yards for attack and defense, and sending the gnomes out to battle. Each player may use action and battle cards to help turn the tide in their favor and foil their rivals. Players will also use weapon and defense items to equip their gnomes and yard items to bolster their offenses and defenses. The winner of a battle will collect a defeated gnome and the first player to collect three will win the game!

To setup the game, players first shuffle the gnome and player decks separately. A player draws 3 selection gnomes cards face up from the gnome deck and each player is randomly dealt 5 cards from the player deck.

The first player selects (recruits) a selection gnome and places it in front of them. The selected gnome is immediately replaced with another and this process is repeated clockwise for the next players. The last player will select twice and gnome selection will then move counter-clockwise until all players have 2 gnomes. At this point players can attach one item (attack or defense) per gnome and one yard item from their player cards and then draw back up to 5.

The Battle Gnomes! is broken out into turns, each of which has 3 steps taken in the following order (skipping steps if desired):

1. Going into battle. Attacking player chooses an opponent, but they must have at least 2 gnomes in play. Cards that prevent battle or action cards that influence the whole battle must be played immediately after an opponent is chosen. The attacker chooses 1 or 2 gnomes to battle with and their opponent chooses 1 or 2 to defend.

2. Winning the battle. The combined numeric value of the gnomes, attachments and yard items are added up and players may add battle and action cards to improve their scores. Other opponents outside of the battle may add their battle or action card as well. The player with the highest total wins the battle and attacker win ties.

3. After the battle. If you’re defeated (attacker or defender), you select one of your gnomes that participated in the battle and give it to the winner. All attachments on that gnome are discarded. The winner will keep the defeated gnome for end game scoring. Each defeated gnome is worth 1 point. The attacker and defender then draw back up to their hand limit.

The game will end under two conditions. The first is when a player receives their 3rd defeated gnome and has 3 points. The second is when the gnome deck runs out and 3 selection gnomes cannot be replenished. Each player gets one more turn and the game ends. The winner is the one with the most defeated gnomes and in case of ties then the most items still in play.

I loved that Battle Gnomes! doesn’t take itself too seriously. From the silly battle cards, attachment items and gnome cards, Battle Gnomes! is poking fun at itself and the theme of this game: waring gnome households. It still makes me chuckle.

I think it’s good that Battle Gnomes! is full of humor because it’s not a heavy game. There is some level of strategy but it’s on the lighter side, which is good for gamers looking for a game that’s both easy to pick-up and master. I think Battle Gnomes! will appeal to any gamer’s lighter side or those looking for a nice humor filled gateway game for new gamers.

It’s also worth noting that any gamer, new or old, should like the fact that there’s little downtime in the speed of play. The turns are fast and can be even faster because players can skip steps if they want. Even when it’s not your turn you’re engaged watching opponents draw or discard cards, looking for them to make a mistake so you can pounce on them.

Luck of the draw might seem like a big part of Battle Gnomes! because you’re drawing player cards and the new selection gnomes blind. But like most good card games, this one does have nice balance to both decks and player options so Battle Gnomes! is not completely dependent on luck. There are cards that seem stronger and weaker, but most added to the right situation or gnome balance quite well to the overall game experience.

During set-up and game play having 3 selection gnomes, gives players more variety to decide which are the best fits and possibly discard any during game play that aren’t. Players are also able to discard as many player cards as they want each turn so it’s up to players to find the best options. Both game play options definitely give players the chance to create their own luck and give them a good sense of control.

Now I will say that I received a preview version of Battle Gnomes! and there were a few holes in the rules that made game play a bit bumpy for us. But I have to note that I sent questions and received quick and concise answers from Branum Games. More importantly the designers will be updating the rules based on our questions. So, you’re welcome backers!

If you are looking for a lighter humor filled card game, then Battle Gnomes! is definitely worth checking out. This is a fun card game that has nice balance of player decision-making and options, so the luck of the draw does not solely drive the game play.

If you’d like to become a backer, pledges start at $25 for the full game and stretch goals. Battle Gnomes! is scheduled to deliver in February 2017, so head over today and check it out.