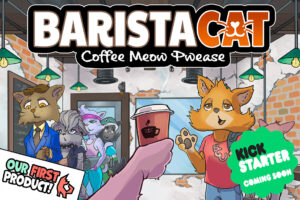 Baristacat is a new card game from first-time publisher Tiny Wolf Productions. In Baristacat, players are vying to be the best barista by taking care of their customers and fulfilling orders faster than everyone else. But doing this won’t be as smooth as a nitro-infused cold brew. Your other baristas want to be the best too. They will have ways to mix up or send back your order or even mess with your tips! But don’t let that grind you down. Show them you have the beans to be the top brewer! The game can be played with two to six players in about thirty minutes.

Baristacat is quick to get set up and played. Separate ingredients and customers cards into two decks. Deal out seven ingredient cards to all players. Then, deal out eight customers to the table, returning any special cards that may have been drawn back to the deck. This is the waiting area.

On your turn, you will take two actions: fulfilling orders and preparing ingredients. Fulfilling orders will have players using ingredient cards to fulfill as many orders as possible. If a customer’s order requires two beans, a milk, and a flavor shot, and you have those cards, discard them, and claim your customer.

Each customer gives a tip, which will be added to your total at the end of the game. Players can fulfill as many orders as they are able to on their turn. After that, you will prepare ingredients by drawing five new ingredient cards. New customer cards will be dealt to replace any that were fulfilled that turn. Play moves on to the next barista and so on and so forth until one of you has completed ten orders. Everyone totals their tips and whoever has the most, wins!

Baristacat is geared towards kids and families, and I think that’s a good fit. The rules and turns aren’t complicated, so kids as young as six could learn and play along. The bulk of a player’s action is matching, so that makes it more accessible for a younger crowd. Parents may have to help with the special cards depending on your kiddo’s reading level. It has a colorful palette and the different cat customers will appeal to those younger players who like to add their own personality flair to characters. The playtime is also appropriate for families, but I would imagine with a larger group, the game would go longer than the thirty minutes advertised. Something worth considering if you’ll be playing with mostly younger kids.

I mentioned that there might be ways to mess with other people, so let’s talk about that. Scattered throughout the ingredients deck are special cards. These can do a couple of different things and, depending on what they are, will determine when they can be played. Some cards can modify the tip total either for a customer you are claiming or against an opponent. You might also be able to spill an opponent’s drink, keeping them from fulfilling their order. The customer deck also has some special cards. They can impact the tips and even the available customers, including replacing all those in the waiting area. Some of these cards aren’t too mean, but some parents may hold off playing these against their younger baristas.

Lastly, I would recommend, if you don’t already have some, getting some cardholders. There might be times where you just can’t fulfill an order or maybe you’re wanting to hold off fulfilling an order so you can complete one the next turn that pays more. So, the cards start to fill up your hand. This will especially be helpful for young kids, and it’ll make it easier for them to assess what they have and allow you to help as well. I did like that you don’t have to play through all your cards each turn, especially if you have some special cards that you want to use at the right time.

Baristacat is an entry-level card game that younger kids and families might have a place for in their homes. It’s also a really quick game to get to the table. I think that the colorful design and characters will appeal to your younger crowd. Parents shouldn’t have any trouble teaching or playing this game with their kids on their next game night.

If this sounds like a game that you and your family would enjoy, Baristacat launches today on Kickstarter. So head over to the campaign page for more information, or to become a backer.