We review Bad Maps, an action programming game published by Floodgate Games. In Bad Maps, players are trying to earn the most points by scoring objectives during the round via their programming cards. 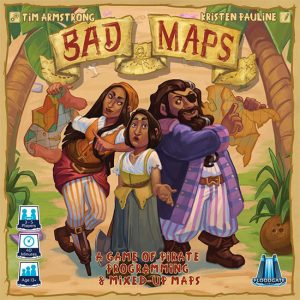 For 15 years, I was a computer programmer (web developer working in C#, HTML, CSS, and JavaScript for those who care). For a few of those years, the game Drakon nestled itself in my top 5 games of all time. Other programmers I know enjoy Robo Rally. When programming games go well, the amount of code execution you control competes with things going wrong from some random event disrupting the code.

I could go on forever about programming games and the various levels of competency. When they sent me a pirate game about loot-finding and inaccurate maps, I was surprised I hadn’t played or heard of any other games with this combination of elements.

Bad Maps is an action programming game for 3-5 players that takes 60-90 minutes to play. The game is best at 3 players.

On setup, players will receive a set of map cards, randomized objective cards, and a pirate player board. Then, four pirate tokens representing minions are placed on the grid board in a starting location.

The game takes place over 2 rounds, each being essentially the same with the exception that the board “terrain” created in the first round carries over to the second round. The goal in each round is the same, gain points from guessing which minions will get closest to the treasure location, the red X at the center of the board. These guesses are tracked with the objective cards, including the potential that a pirate might be in last place for an objective.

Each player then takes turns to play map cards on a board edge that represents a minion of a certain color. For example, if I want to move the red minion, I play a move forward (one or two spaces) card on the red slots along the game board edge. Each player takes turns to do this until all minion slots are filled.

Complicating this is another deck of cards that shows which cards played to minion slots must be played face up or face down. This gives players some information about how the minions will move.

At the end of the round, points are scored for each correct guess by players holding on to objective cards that have successfully scored. The winner is the pirate with the most points.

First, the randomness. Yes, this game has a lot of it. Each player is able to disrupt every other player’s actions with any individual card played. This makes for a game of random minion movements once the resolution of actions starts. With even one player going after objectives to make a minion farthest from the treasure, it’s hard to be sure that any minion will be in a certain location at round’s end.

Second, the art. Kristen Pauline is a very good illustrator when given fantastical and imaginary characters to work with. Whatever direction was given here has resulted in work far below her potential (seriously, I looked at her work online and it was all better than what was done here). It feels like the game has too many mechanical elements for her to express any creativity.

Third, the concept. In this case, it isn’t the captains who are moving towards the treasure, it’s the pirate minions. And the captains are “betting” on who will get closest to the treasure? This doesn’t work. Colt Express, a much better programming game with a light theme, accomplishes the integration of theme and mechanisms far better. There are so many better options to implement this same concept of game. It’s a shame that this is such a miss.

If someone is reading this review with the hopes that Bad Maps is a good programming game, I would advise you to play other programming games first. The main takeaway from my experience with Bad Maps is that this is a game for young(er) players or those who enjoy a lighter, more take-that form of programming. It wants to be as good as other similar games, but the amount of randomness contained outweighs all the control players have.

Final Score: 2 Stars – Big hopes for a programming game with a pirate theme walk off a plank of miscalculations of randomness and mechanism mismatched with theme.