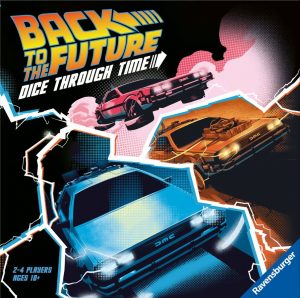 Great Scott! Hoverboards! Deloreans! Flux Capacitors! Back to the Future: Dice Through Time will take you through a journey of the entire Back to the Future movie trilogy. And, as you might expect, you’ll be trying to keep all the timelines straight while punching Biff occasionally just for good fun.

The board in Dice Through Time is composed of five locations in each of four different timelines. You will control a Delorean on one of these spaces and you’ll start the turn by adding events from a deck to the board, representing events that you need to complete to help put the timeline back together. Completing an event will award you an item that, of course, belongs to another place and time. Your goal is to deliver all of the items to their correct place in history and if you do so before you run out of time, you’ll win.

All of this, obviously if you read the name, is accomplished by using dice. You’ll roll your pool of dice at the start of your turn and you can use them, based on the result, for various actions. The flux capacitor result, for instance, will let you move up-and-down, traversing into a different time. Events also need a specific combination of results to complete them. And you can only complete events if Biff isn’t in your way. So if he (or Griff, I suppose, in the 2015 timeline) is, you’ll have to use a fist result to move them around.

Once you complete an event, you get an item from that timeline. It’ll tell you where to deliver it and if you successfully make it there you’ll move the Outatime marker backward, giving you a bit of relief. You’ll also get an Einstein token, which is drawn from a random pool and gives you another bonus action.

You may have to rely on help from your past self, especially as events start to pile up. A player can leave one of their unspent dice on any location. As long as it’s on the board, it can be spent by a player who is at the same location in the same timeline or later. It doesn’t work the other direction, obviously, as if you leave something in 2015 it’s not going to be there to help you in 1885.

After all players have spent their dice, the Outatime marker moves down the track equal to the number of locations with an events from a single timeline (whichever has the most). Those locations will also get a paradox token, which will add to the number of spaces you have to move the marker in future rounds if those events are still not dealt with. If the Outatime marker ever reaches the last space it is game over for the Michael J. Foxes.

We’ve been spoiled with great games based on cool intellectual properties recently. Back in my day a licensed game almost definitely meant a poorly designed one. But Ravensburger and many other companies are pairing these movie and comic franchises with well designed and developed mechanisms. If you are newer to the board game hobby you certainly may have picked one of these up at Target and are now looking for more games to put in your collection.

And if you love Back to the Future, you will almost definitely find some enjoyment here. You’ll have to get over to the Enchantment Under the Sea dance and introduce your parents to the wonders of Chuck Berry. You’ll have to grab the Sports Almanac and return it to its rightful place in 2015. All while activating the flux capacitor in your Delorean to move through time.

I will mention, each location has three copies of the event in the deck, so you may have to visit Hill Valley High in 1955 up to three times throughout the game. And every time the event card is the Enchantment Under the Sea event. The art is also the same on all three of them. Maybe this bothered me more than it should, but some more variety there in either the naming of the events, the art, or both would have been welcomed.

Now, the theme aside, the gameplay here feels a little bit like a paint-by-numbers design. You roll your dice and use them to move around and, once you get where you are going, hope you have the right dice left to complete the event there. There are really two gameplay-related things that attempt to tie this all into the Back to the Future universe. The first is Biff. He gets in your way and prevents you from completing events and returning items. So a fist action has to be used to move him around. This makes sense thematically but feels uninspired. The rippling dice through time, allowing you to use them in the same location but at a later time is the real innovation. Especially at higher player counts where you can accumulate dice from multiple players to use later it can add some strategy to an otherwise dice-chucking experience.

Dice Through Time also suffers a bit from its difficulty, or lack thereof. In the standard difficulty, we never broke a sweat. You can crank up the difficulty, but that just amounts to having more items to return which means a longer playtime. And the strategy really never gets more interesting, you really are made or broken by the randomness of dice rolls when you push the difficulty up as there isn’t a lot you can do to mitigate them in the game.

But in the long run, I don’t think Dice Through Time has enough interesting mechanisms or strategy for hobby gamers to keep it in their collection. The rippling dice adds some interest but everything else is pretty straightforward and after you’ve experienced it a few times you may want to make like a tree and get out of here.

Final Score: 3.5 Stars – Makes good use of the Back to the Future theme on otherwise standard cooperative game.

Hits:
• Makes good use of the movies’ themes with items getting shifted all around history.
• The rippling dice mechanism is a fun twist and allows real cooperation between players.

Misses:
• Too easy at standard and can feel too long at harder difficulty.
• Can be overly dependent on dice rolls as there aren’t a lot of mitigation options.
• Events repeat and use the same art and that bothers me.