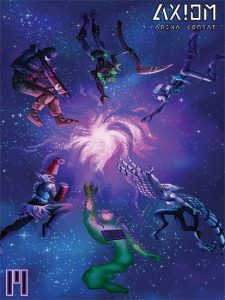 Arena combat games are miniatures games. This is something of a paradigm in gaming. The figures represent combatants traversing across terrain to strike at their opponents. This is common, but it’s not something mandatory. In fact, Spencer Steeves is asking players to second guess their assumptions with his new title, AX!OM: Arena Combat.

With a basis in card games such as Magic: The Gathering, AX!OM combines the card play of card combat games with the board positions of tactical miniatures mechanisms. The two elements have the potential to work really well together. This preview aims to give players a deeper story to see if AX!OM is something to back on Kickstarter.

AX!OM is meant for two players, but the gameplay is flexible enough that multiplayer games could be possible. Each player will field a crew of 3 fighters into the arena along with a pre-constructed deck composed of the mandatory cards for each fighter plus a selection of other cards intended to work well with the fighters.

To start the game, each player picks out six cards from their deck and shuffles the remainder. The first player takes a turn comprised of 3 phases, then play passes to the next player. The round finishes when it comes back to the first player. A round tracker (such as the included 10 sided die) is necessary to keep track of which round it is; this will come in handy as rounds go by.

On a turn, players have an Alpha Phase, Event Phase, and an Omega Phase.

The Alpha Phase is primarily a reset and triggering phase. Actions are granted to fighters to be used in the Event Phase. A player may also draw 1 card from their deck. Other effects that end will be concluded in this phase as well.

The main phase of the game is the Event Phase. Players will want to check the round tracker to see which round number it is. A player may only play a card if the “R” number in the top left corner is equal to or less than the current round number. For example, if it’s the 3rd round, a player may play cards with R1, R2, or R3 in the top left. In addition, each card has a Type and a Fighting Style. Card types such as Signature or Support mark the card as one that is mandatory for a player’s deck (Signature) or are optional (Support/Power) respectively. The Fighting Style illustrates the category of damage the fighter is such as Stasis or Energy.

A player may only play 2 Signature cards, 1 Support card, and 1 Power card. In addition, all character cards will have a token to mark their position in the arena, or players may use the cards themselves. This comes into play because each fighter also gains one Move action to an adjacent section of the arena before or after a card is played.

To strike down opponents, fighters also have a standard Attack action. The base damage and maximum damage from this attack is listed on the Fighter cards in the upper left. Players will keep track of their own fighters’ health on tracking cards off the board.

The end of the turn happens after the final phase, Omega. Any lingering combat effects now end.

When all the fighters of one side are dead or removed from the arena, the game ends. Games will typically last 30-40 minutes depending on the health of the fighters. Players might also encounter the negative effects of running out of cards in their deck by losing 10 health from each of their fighters in the arena.

AX!OM solidly steps in between arena miniatures games and collectible card games and parts the waters. The tactics on the cards use both positional and lingering effects to bring challenging fights to players. The limitations on card play by round and by type create dramatic decisions as the game progresses.

Overall, the characters included are rough, but each one has their own unique style and art. The flavors of fighters range from barbarian She-Wolf to techy Argonaut to the oozey Ebb. This gives each play a unique feel as different fighters are combined.

One thing that is missing from the game are options for arena terrain and effects. For this base set, the two-sided arena board is graphically pleasing but sparse. Fighters will only need to worry about each other when moving between spaces.

Those who have played a ton of Magic: The Gathering but are looking to try something different should take a look at AX!OM. The introduction of an arena has a lot of potential, some of which is adopted by the introductory offering. On the flip side, players who love arena combat games should also size up the Kickstarter. The interplay of card effects, attacks, and movement really gives rise to some interesting decisions.

If you are interested in getting a copy of AX!OM, it launches today on Kickstarter, so head over to their campaign page to become a backer, or to find out more information.