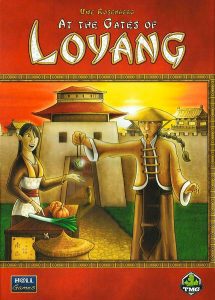 If you ask modern board game fans to list off their favorite board game designers, it won’t take too long for Uwe Rosenberg’s name to come up. He’s had some massive hits, including Agricola and Le Harve, which make up the first two games of his “Harvest Trilogy”. Today we are reviewing the third game of that series—At the Gates of Loyang.

So what makes At the Gates of Loyang different and does it deserve the same evergreen status of the other games in the Harvest series? Let’s dig in.

Each player takes the role of a farmer who will harvest their vegetables each season and spend their resources to plant, fill orders, and trade in the market, hoping to earn prosperity. The game is played over nine rounds which all follow the same process:

A lot of the interesting decisions within At the Gates of Loyang exists within the card distribution. Each round you’ll end up with two cards, but you must keep one from your hand and one from a common area called the Courtyard. The first player will always add one of their cards to the courtyard. The next player has the option to take that card and one from their hand or add another card to the courtyard.

If you end up getting two cards dealt to you that you’d like to keep, it’s possible to end up with them. But only if you add one to the courtyard and it comes all the way back around to you without someone else grabbing it. Alternatively, maybe nothing matches exactly what you are hoping to see, so you add to the courtyard, giving other players more choices but buying some time until you must make a choice.

The cards come in four varieties. Helpers that give you special abilities, market stalls that allow you to trade into different vegetables, and regular and casual customers. The customers have certain veggies they want you to provide. Regular customers will want the same thing every round, for four rounds, and will pay you each time. Casual customers only get fulfilled once and then are discarded. Regular customers can be a bit picky though and if you are unable to fill their order, they will get angry and eventually cost you a penalty if you continue to not fulfill their orders.

After each player finished their actions, they can move up the prosperity track by, basically, buying victory points. The first point every round only costs 1 coin. After that, you can continue to move up, but you’ll have to pay coins equal to the space you want to move onto. So, if you start the round with 13 prosperity, you’ll pay 1 coin to move to 14. If you happen to have 15 coins left, you can pay them to move up to the 15 spot on the track. After the ninth round, the player who is farthest along the prosperity path is the winner.

The card drafting element works differently than most any other game I can think of. It becomes somewhat of a press-your-luck affair. And even in the best-case scenario where you immediately have a card you want from the Courtyard; you’ll be adding three additional cards which gives everyone else better information right away to make their decisions.

And how much money should you end the round with? A lot of games you’ll want to maximize your actions every round, use all your resources, and increase your “engine” for the next round. But in Loyang your victory points don’t come free. You’ll certainly want at least one coin to buy that very cheap prosperity point. But having enough to continue buying pays off in the long run as well.

Flip the box over and you’ll see the player count proudly lists 1-4 players. Personally, I am not much of a solo gamer, but I hear this is fantastic (the card distribution is changed to a grid of cards you can buy from). For me, it’s ideal at two players. The risk/reward of the card draft is immediate, and the downtime is minimal. With three it’s not bad but starts to suffer a bit from downtime. Each player takes all the actions they want to take before the next player starts, so it can be a bit slow.

Now let’s say you add a fourth player. There are rules about partnership. And shared turns where you can’t impact the partner you chose. This is done certainly to limit downtime (and it does) but it really weird to explain. You can play without the special rules I would assume, but you’ll have time to go pick up dinner between turns.

If you regularly game with one or two other players who don’t mind boring themes as long as there are interesting mechanisms and clever decisions; have I got the game for you! Now, this pretty much falls directly into the wheelhouse of my group. At the Gates of Loyang focuses on careful management of resources, well-timed card drafting, and spending your way to prosperity wisely.

At the Gates of Loyang suffers from its handling of four players and it certainly isn’t a theme to grab people’s attention. But when you talk about Uwe Rosenberg games, this one absolutely deserves its place next to the other boring-looking farming games that you already know and love.

Final Score: 4 Stars – A great euro for 2-3 players. Card drafting is unique and lots of great decisions to make about when to buy points.

Hits:
• Unique card distribution element is tense and interesting.
• Buying victory points makes for lots of tough decisions.
• Different types of customers allow you to focus on a strategy.

Misses:
• Not as great with 3, very strange at 4.
• Theme is something about leeks and turnips.