We review Assassincon, a deduction game published by Mayday Games. In Assassincon, players are trying to take out their targets without getting caught by the guards. This quick playing game scales up to six players and has some unique rules. 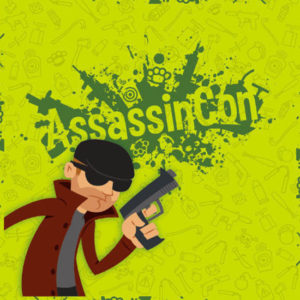 Conventions are wonderful things. They allow people who share a similar passion to gather and enjoy what they love. There are conventions out there for board gamers, auto enthusiast, and even Abraham Lincoln presenters. Today, we will be looking at AssassinCon, a board game that explores the possibility of assassins all getting together at a convention to see all the new killing techniques, and also play a little game to see who is the best assassin. Is this game worth your time or should it just stay in the shadows? Let’s find out.

AssassinCon is a deduction game for 4-6 players to complete in about 30 – 40 minutes. In my experience, the game plays best with 4 players.

At the beginning of each round, players will get a random colored deck filled with A, B, and C movement cards and will determine which color assassin they will be playing this round. Players will then pass their target cards to the person on their right or left, and the round can begin.

The game is half about trying to eliminate your target and the other is about trying to figure out which color assassin is after you. You want your character to be in the same room or a special elimination room, and have your target in a room matching the color you can eliminate (kills are worth 1vp). However, you need to be stealthy because players have the ability to call guards and can earn victory points if they correctly guess who is after them. The round will end when one player has called guards or there are only two players left in the round. The next round begins with each player getting new random colored deck and the process continues until a player has earned five victory points at the end of the round.

When I first heard about the premise for AssassinCon, I was intrigued. I love the idea of sneaking around and waiting for the opportune moment to come out of the shadows. While the experience isn’t perfect, it has a few interesting mechanics that make it fun to play.

What allows this game to be more than just an exercise of cat and mouse is the ability for players to call guards on who they think is their assassin. This forces players to try to mask their eliminations by only doing it when there are a few possibilities rather than rushing to tag someone out as quickly as possible.

While your color remains hidden until the round is over, if you don’t try to hide your eliminations, players will use simple deduction to figure out your color. This makes the game much more tactical than I expected which ties in well with the assassin theme. There will be times when you will need to pass up an elimination because the timing isn’t right. This is a difficult concept for some people I played the game with. They started to change their tactics after a few rounds of having guards called on them and losing all their victory points earned from eliminations.

When I saw the player count of 4-6, I was hoping to get a game that fit into the 6 player niche that I find hard to fill. Unfortunately, it works better as a 4 person game then a 5 or 6. This might be more of an indictment on the people I played with, but they are not patient enough to wait to attempt eliminations. If a person eliminated two people, the next person in line was able to call guards most of the time. With a four person game, this doesn’t happen as frequently because there are only two eliminations before the round ends. This makes it more about noticing assassin movements rather than seeing who could be the only color that could’ve been involved with the eliminations that round.

The simplicity of the movement phase allows players to focus on trying to devise their pursuer. With only options to move A, B, or C, seeing the rest of the board is easy. While it might have been interesting to have ways to mask your movement or move across the board, that is too much for what this game is. It’s simplicity is what keeps it a good experience.

I do have a few small complaints about the components in the game. The assassin pawns are cardboard with plastic bases, similar to what you might have seen in childhood board games. While this is ok, I did slightly damage the base of one assassin trying to get it into the plastic stand. I would’ve preferred if they had gone with just tokens instead of these. Also, I wish there was another side to the board. Having another convention to traverse would be a nice way to change-up the game.

AssassinCon is a solid game. Despite simple movement options, the game is engaging throughout. You are constantly trying to anticipate your target’s movements and trying to find an opportunity to strike while still looking over your shoulder. There is a wonderful combination of deception and anxiety in AssassinCon that works well together.

However, the experience isn’t consistent. When other players are quick to eliminate without taking the proper precautions, the experience is uneven and calling guards becomes routine. The game is best when this doesn’t happen. With proper explanation to players, AssassinCon can be a wonderful experience that I recommend.

Final Score: 3.5 Stars – A well designed deception game that rewards your stealth more than you aggressiveness.

Hits:
• Simple movement allows you to focus on actions of others
• No player elimination
• Guard ability makes the game much more tense