We review Armata Strigoi, a cooperative game published by Pegasus Spiel. In Armata Strigoi, players are members of the band Powerwolf and must take on vampires seeking their destruction. 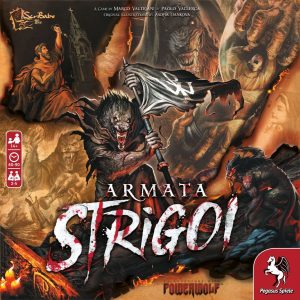 Words have failed this reviewer. There is no way to explain to readers what the concept of this next game unless they are on the same page as yours truly. Indeed, all that was known before the publisher sent the review copy is the name and that the theme involved the classic struggle of werewolves vs vampires.

This is a game based on the power-metal band Powerwolf (Powerwolves collectively). The band’s aesthetic is to masquerade as instrument-bearing werewolves who entertain crowds and regale them with stories of defeating the army of the undead (Armata Strigoi in Romanian). Clearly, this is the strangest theme for a board game that this reviewer has come across (including Gut Check). Powerwolf has a bigger following in Europe, but there are some fans worldwide.

In gamer geek terms, what publisher Pegasus Spiele is offering is a cooperative action/hand management game with the band members, the “Powerwolves”, fighting master vampires in the shifting fortress Tismana, the home of the undead. The game plays up to 5 players (which just so happens to be the same as the number of members of the band) and takes about 60-90 minutes depending on player count. To get the most out of it, players should get the full band back together, but those interested in a quick game will be happy with 3 players.

Once the modular board and figures are set up, players will want to select the characters they wish to be. Each Powerwolf band member has a set of differently powered action cards. There are a few other off-board areas to populate with tokens, but other than that, the setup is pretty straightforward.

The meat of the game comes with the action selection mechanism. Without specifically mentioning the abilities of cards in hand, each player selects an action card for their turn. The vagueness of the action selection is supposed to make cooperation in the game more challenging. A number on each player’s selected card will determine the action order for the round. Other options on the card will determine the character’s movement speed, their strength for attacks, and any extra abilities for the turn.

When a player takes their turn, the main objective they have is to engage Encounter Tokens. These represent various enemies in the castle which can be defeated for power-up style rewards. Some rewards will grant the Powerwolves more strength, but ultimately, the Powerwolf characters are searching for Encounter Tokens that will grant them Blood Points to be placed on an Altar space. Once the Powerwolves have accumulated enough Blood Points, they may attack the assistant vampires and/or the master vampire. When the Powerwolves defeat the master vampire, they win the game.

The result of these attacks and as a result of failing to overcome an Encounter Token, the Powerwolves will gain wound tokens. Any player who takes 3 wounds is not defeated, but the Powerwolves lose a Blood Point that was previously gained. These blood tokens are moved to an “Inferno” Card. If the vampires collect a certain number of these (based on player count), they win.

In addition to the game’s mechanisms above, the rooms of the castle will rotate at times while there are also options to move quickly around the play area. All in all, it feels somewhat like a cooperative dungeon crawl with a limited set of action cards. There are some advanced cards that can be added to a player’s deck, but the main mechanism functions more like action selection with cards rather than a deck-building game where multiple cards are played.

This reviewer is not particularly fond of a wide variety of heavy metal music (of multiple varieties). However, that isn’t to say that fans of the band Powerwolf will automatically enjoy this nor is it to say that gamers who don’t like metal music won’t find something interesting here. What came as the biggest surprise is just how polished and well-constructed this product is. Publisher Pegasus Spiele has not just slapped a Powerwolf brand on a quick set of rules and pushed this out the door. The game has theme oozing out of every nook and cranny, and, even more, the game’s mechanisms are not horrific (in a mechanically bad way). It has some juice and does take some solid cooperation to win.

Now, it does need to be said that players interested in buying this product should really know who Powerwolf is before they purchase. This is a VERY specific theme, and it does feel overwhelmingly marketed for the fans of the band. What will more likely be the case is that one or two members of a playgroup will enjoy the band enough to make a purchase, and other gamer friends will not be bored while playing. That indeed is saying something about the dedication to the product concept that publisher Pegasus Spiele made sure of the overall quality of the gameplay first.

Now, to be fair, this is not a game that this reviewer would purchase for the aforementioned devotion to theme. However, there are additional issues that could turn off a purchase. These arise with the complexity of learning the game. There are a lot of mechanisms unfriendly to gamer newbies or casual metal friends who want a chance to try out a cool Powerwolf game. With a good teacher, this can be overcome, but it does take some patience to learn this title from the rules. And for less experienced gamers, this is an exceptionally complex game.

The last point for this review is not necessarily a negative, but it could be an issue for more hardcore gamers. At lower player counts, the game is not particularly difficult. There is enough space to move around to avoid becoming a target for vampires. In addition, the vampire’s position is predictable enough that you can generally move to a safe location. The difficulty can be adjusted by requiring fewer blood for the vampires to win, but the scale doesn’t seem like there is a lot of flexibility here. The other way to make the game more difficult is to further limit the communication between players. This is easier to do but makes for a different, and, in this reviewer’s eyes, less fun experience.

Readers who are gamers and fans of Powerwolf should buy Armata Strigoi. It’s a decent game with enough bite (sorry) to get the blood vessels pumping (sorry again). Even gamers who love an unusual theme but are on the lookout for interesting dungeon crawlers could also find something to howl about (really, very sorry) here. Even if it’s on the easier side, the gameplay in Armata Strigoi is solid. The difficulty issue isn’t enough to put a stake through this one (very, very sorry, they just keep coming back from the dead).

Final Score: 3.5 stars – Gamer fans of Powerwolf will find an experience that matches the strength of the band’s chords. Others might not enjoy it, but they won’t be bored.

Misses:
• A little easy without much difficulty scaling
• Not much to change from game to game