We review Aqualin, an abstract game published by Thames and Kosmos. In Aqualin, you will draw tiles and add them to a grid, hoping to create patterns to score you points. 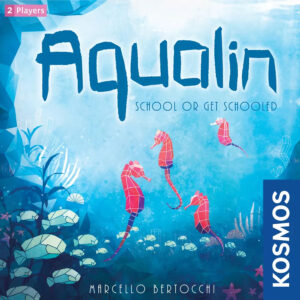 One of the biggest hits in terms of games I’ve introduced to my family has been Qwirkle, the 2011 Spiel des Jahres winner. It combines elements of sudoku, crosswords, and pattern recognition into a fun game for all ages. While the game scales quite well, I don’t feel like it is best with just two players.

But this is a review of Aqualin, another entry in the well-regarded Kosmos 2-Player line, being published in 2020 and designed by Marcello Bertocchi. How does it connect to Qwirkle? Really it’s just the fact that the components are black tiles with different colors and shapes. But any game that gives off Qwirkle vibes, I have to at least try with my wife, who loves tile laying and breezy games in general.

In Aqualin, one player is scoring connections of the same color, and the other scores for connections of the same ocean dwellers. There are 36 tiles, one of each of the six creatures in the six different colors. You start by mixing up the tiles face down and placing six of them face up for both players to draft from. The board is a 6×6 grid that will fill up after all the tiles are placed.

Turns are incredibly simple. A player may first move a single tile in a straight horizontal or vertical line until it hits another tile or the edge of the grid. Then, they draft one of the six face up tiles and place it in any of the empty spots on the board. A new tile is drawn to replace the drafted one and the opponent then takes a turn. The game continues until the board is completely filled.

Scoring is based on the size of the largest groups in the six colors/creatures. So if, as an example, there are three red tiles orthogonally adjacent at the game’s end, then the player scoring for color will receive three points. Larger groups award more points, the most being all six connecting for 15 points. Single-tile groups are not scored. Whichever player has the most points is the winner.

So straight off the bat, we can shut down many of the Qwirkle comparisons. And that comes in a few forms. Aqualin is much meaner. While both play out in a shared space, Aqualin sees players attempting to score for distinctly different items, while Qwirkle gives all the players the ability to score any color or shape. This changes a whole lot, whether it’s the strategy/planning, the emotions in reactions to the opponent’s move to intentionally separate your pieces, or the thought processes behind scoring. Qwirkle is one of those games that is definitely abstract, but not an abstract strategy game due to the large amounts of luck and heavy scoring swings. Aqualin has luck, but is definitely an abstract strategy game, as moves are targeted toward bettering your score and directly worsening your opponents.

But let’s focus on Aqualin in a vacuum. For a game with pastel colors, fun animals, and an inviting box, this is a mean game, like many abstract games. I’ve played many in the genre with my wife before, but this is one where the decisions fueled frustrations, more so than nearly all the others. The first part of a turn where a tile slides is generally used to separate groupings, and the tile placement can be also used to block pieces from sliding back into those groups. A game is rewarding when you are scoring, but the best move may be to lower your opponent’s score, and that isn’t always the best feeling.

The components are almost exactly what I want from this package. The tiles have a nice heft to them, and adding them to the grid feels good as gravity pulls them back to the ocean. The images are easy to differentiate and I like the colors they chose (though I’m not certain if they are colorblind friendly. That’s something very important to consider, and might require those impacted to play the shapes side.)

My biggest gripe in terms of components is scoring. But wait, how is that related to components? Because the only place the scoring chart is shown is on the back of the rulebook. It’s not something that can be memorized easily unless you play Aqualin on a regular basis, so not having it printed on the board seems like an oversight. It’s obvious a group of four tiles should score more than a group of three, but by how much more?

I think where Aqualin suffers is the feeling you get from the game. It’s almost like it has an identity crisis. The theme and colors are soothing and quite pleasant to the eye. But each move can be thought provoking, and then anger inducing to the opposition. You want to think a few moves ahead, but that’s not always possible due to the luck of the draw. I’m not sure who this is marketed towards with all those factors in mind.

That being said, I don’t think Aqualin is a bad game. When you are able to position pieces that will score big and are locked in due to being surrounded, that feels rewarding. Will those moments come about often? It’s hard to say. Do you feel like you made great strategic plays to get those points? Not always. The grid will always be filled by the last move, so there are times where you stumble into a position to get a nice group of points. I have enjoyed my plays of Aqualin, but it didn’t resonate with me like I had hoped.

Final Score: 3 stars – An enjoyable abstract that is deceptively mean, almost to a fault.

Hits:
• Quality tiles and art
• Rules that can be taught in 30 seconds
• Quick setup
• Rewarding feel from scoring

Misses:
• Game is almost too mean for what is being marketed
• Mismatched identity with components and meanness
• Scoring chart is not printed on the board or easy to memorize
• A little too luck dependant
• Games feel a little samey