We review Apocrypha, a deck-building game published by Lone Shark Games. Apocrypha is a new take on the Pathfinder Adventure Card Game system and we let you know how it plays. 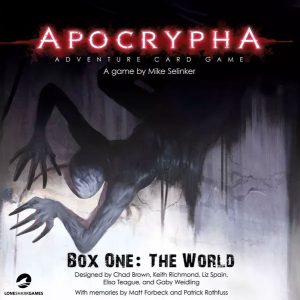 Apocrypha is a 1 to 6 player cooperative adventure card game where each scenario will take about 60 minutes. Players take on the roles of “saints”; normal folk who can see into the paranormal realm and have an obligation to stop the monsters and darkness that threaten the world. The goal of each mission in Apocrypha varies depending on the scenario chosen. Most of the time this is done by defeating enemies and “sealing” locations.

At the start of the game, each player will grab a saint, each of which has different powers and specialties. Each Saint will have a variety of cards in their deck consisting of gifts (item cards) and omens (resource cards). Gifts can be discarded to roll extra dice or to use their effects, while omen cards are used to investigate locations.

Each scenario will tell you what Structure (rules/objective) cards are needed to set up, how to build your timer deck, and how to arrange the locations and enemies for you to fight.

During the round, there is a myriad of things you can do with your Saints. The main goal is to investigate through the location decks to find and defeat the “true threats” of the scenario. Investigators will take turns spending omens to investigate areas that their saint is at.

Usually, a player will use up most of their omens on their turn to delve as deep as they can into the location, hopefully finding more useful items and furthers omens as the game progresses. Each card beside the omen cards will have a check to see if the player at that location succeeds at finding an item or killing an enemy. If a player finds an item, it’s added to their deck for the rest of the game. If they defeat an enemy, it’s removed from the game and they are one step closer to finding the boss.

Once the win or loss condition on the structure card is met, the players will end the scenario and be rewarded or penalized based on what occurred during the game.

Apocrypha has A LOT to unpack and may immediately turn off a lot of players (even veteran board gamers) with its rulebook alone. The learning curve on this game is not kind to anyone opening the box and it’s notorious for not only a poorly written rule book, but for terrible supporting play through videos as well. I had to learn this game from a third-party source after reading the rulebook multiple times. Be ready to search YouTube for help on this one. It took me over a day to learn this game, and I consider myself someone who can pick up and play almost anything.

The player characters (saints) are full of unique characters and fun powers to use in the game. They have enough variety that paying attention to which powers and traits you excel at are a key for success in scenarios. I had a hard time choosing which ones to play in a couple of missions, as they all look awesome and had their own flavor.

The premise for each scenario is clearly explained and has a loose campaign-like structure. The saints vs. monster storyline is solid with some odd moments, but generally works and stays slightly cohesive. Once you wrap your head around setting up each scenario it becomes easier and easier to do. When setting up the game and its various location decks, the random nature of what is included in said decks can cause the game to be overly easy or impossibly hard, especially if the enemies are overpowered for new players.

There is a directional targeting system on most cards, indicating who can target who. This arrow system appears to have been a means to limit words on each card, and it succeeds, but at the cost of causing massive confusion if you don’t have the multiple arrow cards memorized. This is on almost every card in the game, creating a significant headache when you must stop and grab the rulebook (or reference card) yet again to see what you can use your powers and abilities on. Some items also have keywords that are not referenced in the rulebook, leaving you to guess what they could possibly do.

While I was investigating through the location decks, I realized I was running out of omen cards quickly, causing me to pass the turn to the other player. The omen cards determine if your location is going to stay on its hope side, or doom side. This caused me to carefully plan which omens I played and when. I had to decide whether to push my luck to find the big bad guy, or recover and wait another round to dive in. I also experienced a lot of decision making on deciding what items to discard and use during my turn. I was constantly worried about facing something stronger in the deck after a used my best items to fight a monster. I think this is another interesting strategy decision that was implemented nicely into the game.

Player interaction is limited but important. During your turn, you can support fellow players by healing them. You can also assist with re-rolls by contributing your stats to checks that other players make. This results in “mutations” happening to the check. By adding a risk and reward mechanic to players helping each other the game forces your team to really think if those re-rolls for a check will be worth the effort. This was probably one of my favorite ways the game has players interact.

The scenarios I played through were challenging and I was able to get a couple of rewards from playing through them. Each scenario seems well balanced in the storybook, but after you randomly build the decks for the locations it takes that balance and throws it out the window. My first game was a turn 1 loss because I confronted a strong enemy and rolled poorly right away.

Before I want to wrap up my experience, I want to highlight two more important aspects of Apocrypha. The game comes with an amazing divider system that lets you keep all the different cards clearly separated and is a great storage solution. The art and quality of the cards found in this game are top-notch. One of the reasons this game caught my eye was the art along with how well made the components are.

Apocrypha is a completely mixed bag. You have gorgeous artwork, quality components, and interesting game mechanics such as mutations and limited resources. The scenarios and saints are unique and make you want to play the game multiple times. Unfortunately, none of this can save it from an abysmal rulebook and awful learning curve.

Final Score: 2.5 Stars – A great deck building game with beautiful art that has a terrible rulebook and a high learning curve.