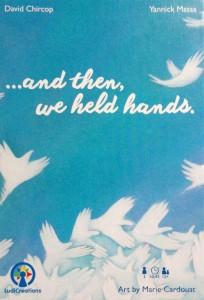 I feel like there has been a growing demand for 2 player games recently. And as I play many games with my wife, I’m actually really happy about that. There is nothing wrong with having a good amount of options to choose from when it comes to games for couples.

Recently, Passport Games Studios released a two player, abstract strategy game called …And Then We Held Hands. It’s definitely one of the more unique gaming titles I’ve seen so far. Designed by David Chircop and Yannick Massa, this cooperative game will require players to not only work well together, but also read each others emotions. Sound crazy? Let’s find out.

…And Then We Held Hands is a cooperative, abstract strategy game for two players that takes about 30 minutes to play.

In …And Then We Held Hands, players will be tasked with moving their marker around the circular grid on the game board. This is accomplished by discarding matching colored cards from their open hands. As they end their move on specific colored circles, they will accomplish objective cards. As the players complete objectives, they will gradually be allowed closer to the center of the ring. To win, both players must complete all the objectives, and then enter the center ring on consecutive turns, and in complete balance. 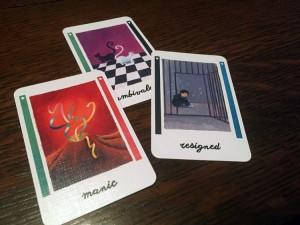 One of the nice things about …And Then We Held Hands is the small footprint of the game. The components consist of a small game board, two decks of cards, and a few colored tokens. The box itself is small enough to easily fit in a backpack or purse so this makes an excellent travel game.

The most notable thing about the components in …And Then We Held Hands is that the artwork was done by Marie Cardouat. You have probably seen her amazingly surreal artwork in Dixit or Steam Park. I think that her unique art style fits perfectly for this game, as its abstract and unique feel really captures the spirit of …And Then We Held Hands.

Once the two decks are shuffled and tokens placed, players are ready to begin the game. Each player starts the game with 6 emotion cards splayed face-up in front of them. Cards are arranged so that only half of the cards are showing. Emotion cards have a colored bar on each side of the artwork (sometimes different colors) and the color bar that is visible is the color a player can use. Note: The bars also contain symbols to aid with color blindness.

We’ll touch on this more later, but I want to note here that the rules say no talking is allowed during the game, at least not about the game itself. Players may talk about anything else, but to strategize, you’ll have to read your partners emotions. Absolutely no table talk. 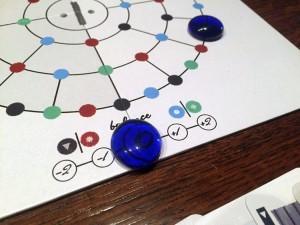 A players turn is as follows:

Balance: Each time a player moves, they adjust their emotional balance. Blue and Green cards move the scale to the right, while Red and Black cards move it to the left. Players cannot go more than 2 spaces in either direction.

If a player ends their turn in the center of the balance track, they can refill their hand to 6 cards.

If a player ends their turn on a node matching the color of the objective card, it is completed and discarded. Once players get through all 8 objective cards, they move onto phase two. This will open up the middle circle and reshuffle one of the emotion card discard piles into the draw deck. After those 8 objectives are complete, players move into the final phase and will be working in the small, center circle.

Once the final series of objectives are complete, players must enter the very center of the board, on sequential turns, and in perfect color balance. Do this and they win.

Players lose if they can’t enter the center on consecutive turns, cannot move at the start of their turn, or they run out of emotion cards. 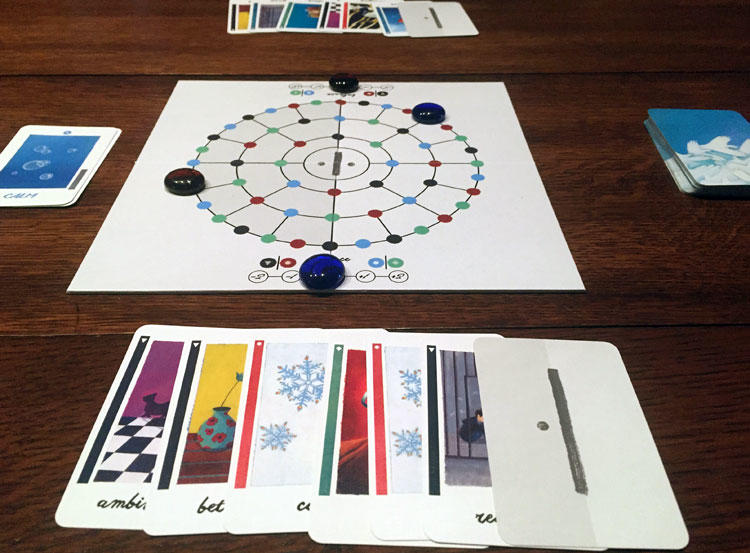 …And Then We Held Hands is certainly a unique game, I’ll give it that. Normally I’m not a big fan of abstract strategy games. I like a game with a solid, meaty theme that will just suck me in. So the amount of abstract games in my collection is fairly slim.

However I had a lot of fun with …And Then We Held Hands, which definitely surprised me. Without a theme and only minimal components, I was worried as to how good this game could actually be. 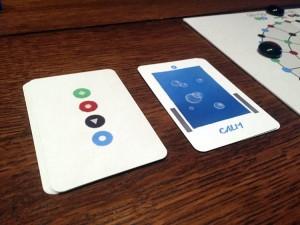 But despite my initial concerns, there is a good amount of depth in this easy-to-play game. And I said easy-to-play, not easy to win. We’ve lost …And Then We Held Hands quite a few times. Players will need to pay specific attention to the “if you can’t move at the start of your turn” loss condition. We lost one game on turn 3 because we weren’t paying attention to that. Ouch.

Above all, …And Then We Held Hands requires teamwork. You will have to use cards from your partner’s hand during some moves, there is no way around it. But you also have to be careful that you leave them a way to move on their turn. This requires both coordination and forethought.

What makes winning hard is the no talking rule. I’ll admit it, we ditched that rule for our first few games, which I’d recommend. At least for your first game, it’s better to learn how to play correctly than worry about the talking rule. Plus, it will help two players learn some of the nuances and strategy of the game.

That said, once you bring the no talking rule back in, the game gets pretty crazy. There will be times when you want to shout at your parter not to make a move, but the best you can do is glare menacingly at them. Hopefully they are good at reading your emotions. 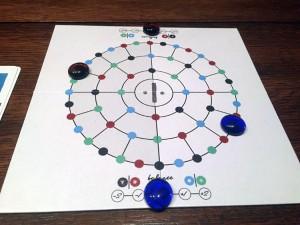 This was actually an interesting way to solve the “quarterbacking” problem prevalent in so many cooperative games. While I’m sure that will be frustrating for players used to taking charge, the added challenge makes for an interesting game.

I was pretty excited when I saw the artist for the game was Marie Cardouat. I absolutely loved her work on Dixit and am a huge fan of her style. That being said, I was a little disappointed that you spend most of the game with the artwork on the cards covered up. Which is a shame really. However I can’t really think of an alternative way they could have designed the game to let the artwork shine through, so I can’t fault Passport Games for that.

While I don’t normally gravitate towards abstract strategy games, …And Then We Held Hands does a lot of things right. It’s an easy-to-learn, two player only game that definitely has earned itself a place in my game library.

While I think the target audience for …And Then We Held Hands isn’t going to be huge (fans of two player, cooperative, and abstract games), if you are in that niche, it’s absolutely worth checking out.

Final Score: 3.5 Stars – A clever two player only game that overcomes its lack of theme with some hard-to-win game play and surprising amount of depth.

Misses:
• Lack of theme
• Great artwork is covered up most of the time.