We review Amul, a card drafting and tableau-building game published by Stronghold Games. In Amul, players are trying to earn the most points by drafting cards into thier tableau and their hands. 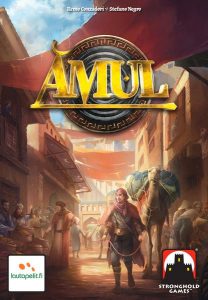 Finally, it is board game day. People are invited over and you are hoping to dig into some medium weight euros that have been collecting dust on your shelf for the past year (or two… or four). And then five of your closest friends show up. Six-player game night? The worst.

But it’s too late to get fewer friends you popular person you. I’d personally lobby for splitting the party into a couple of groups. Often I’ve had more success with that after playing something that everyone can enjoy together. Amul aims to be that game. A bit of a drafting variant that can play up to eight of your friends and won’t take up more than an hour of your evening.

In Amul, players take the role of merchants on the Silk Road, trading their products through a unique drafting mechanism attempting to collect valuable sets. The game is played over nine rounds which all follow the same steps:

Some cards, when played, will allow you to also choose a card from the palace or the bazaar. After everyone has had a chance to pick first, the remainder of the turns has the pick order determined by military strength. Given that the game scales from 3-8 players, military prowess may matter for the majority of the game or just the final round.

After the ninth round, players will add any cards that score for being in your hand to their tableau. Any tableau-only cards in your hand are discarded. Each card has its own scoring conditions and there are majorities scored based on influence with the Arab and Mongol factions. The player with the most points is the winner.

Amul provides a unique experience that takes some of the best elements from drafting games and twists it around enough to make it stand out. It isn’t a pure drafting game, of course. You have to manage your hand throughout the game and you are never passing cards around the table. The key to success, it seems, is finding the right balance throughout the game of how many cards you can hold on to.

It’s easy to make an early mistake and have a hand full of “hand-only” cards that you want to horde. The downside, of course, is that you won’t have much flexibility in what you can play to your tableau each turn since you’ll likely be limited to whatever pops on in the market. Ideally, slowly shift throughout the game from just a few cards you are holding onto, to having an entire hand at the end. It isn’t necessary though. There have been games I’ve played won by a player who just made the best decisions on what to play to their tableau every round and ended up with nothing that scored in their hand at the end.

The other distinguishing feature of Amul is how each card scores. Some cards are a pretty normal set collection—silver, for instance, is worth more per card if you can get three of them. Others care not just about how many you collect but also how many of them your neighbors have. Different still, camels and jade get less valuable based on how many are played out to the entire table. Opium is worth a bunch of points, but if you have any military cards at all it immediately becomes worthless. The iconography on the cards is well done and with minimal explanation, you’ll intuitively know how most cards score without having to look them up.

What Amul does lack is some of the big combo-type cards that are common to other drafting games. In reality, 95% of the cards in Amul are worth something to you. Getting a card with 8 points is significantly better than getting one worth 2 points, but it doesn’t feel all that exciting. Even the cards that seem to exist as the big payoff for a strategy only feel like they are a couple of points better than the next best option. Going heavy into gems? Well, the gem dealer will give you a point for each one you have. So for all that to come together to net you 5 points is lackluster at best.

It’s also worth noting that every card will be used in every game, so there isn’t ever a feeling of hoping a card will be available. It’s just waiting it out and hoping it isn’t already in someone else’s hand. There is a tea variant that can be added that essentially adds some filler to the deck. It takes away the perfect information and makes it closer to a near-perfect information game. If the idea of knowing that there are six camels and there will always be the opportunity to see all six of them all the time bothers you, feel free to shuffle these in. You’ll still probably see all the camels. Maybe not.

Since there is a portion of the game where cards are picked in turn order from an open market, the game doesn’t quite scale as well as something similar—say, 7 Wonders. Playing Amul with the full complement of 8 players is still pretty quick, about an hour, but you’ll have occasional downtime as players have to evaluate the 11 cards that are available in the market.

Amul, while not perfect, serves as a great step up from gateway Sushi Go or 7 Wonders toward more interaction and depth. The hand management versus tableau-building trade-offs you have to make throughout the nine rounds gives the game a different vibe than other drafting games. It’s possible calling it drafting at all is a bit of a misnomer, but you’ll definitely be keeping an eye on what everyone else at the table is picking.

The simple fact that Amul feels more complex but still handles up to eight players in around an hour is a testament to the design. While it lacks high impact card choices that force you into a lot of risk/reward decision making, plenty is going on here to enjoy.

Final Score: 3.5 Stars – A fresh take on drafting that adds a hand management mechanism and lots of player interaction.

Hits:
• Balancing the cards in your hand to having flexibility with tableau choices is key.
• Scales pretty well up to 8 players.
• Each type of card scores differently giving different options for strategy.

Misses:
• Lacks big payoff cards than can score significant points.
• No options for increased variability at the same player counts.