We review the digital version of Among the Stars for iOS. This card drafting game will have you building a space station on your iPads and iPhones and we let you know how good of a job they did bringing it to your tablets. 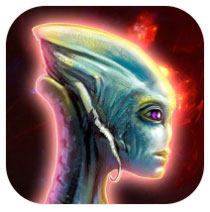 Card drafting games are among my favorite genres in tabletop gaming. I have played just about every new game that uses this mechanic and Among the Stars has always been one of my favorites. As my close friend always says, you can make any game better with a sci-fi theme. Whether or not that’s true is up for debate, but Among the Stars brings the theme of building a space station to the mechanics made popular by 7 Wonders. And now you can play this card game without a table, or even other people!

Developer Cublo has brought Among the Stars to our tablets on both iOS and Android. We’ve spent some time with the iOS version and are ready to dive into whether it made the jump successfully.

The gameplay in Among the Stars is fairly easy to learn. Each player is building out their own space station over the course of 4 rounds. Each turn, players will choose a card from their hand to either play (costing you credits), discard for 3 credits, or turn into a reactor (some cards require energy as a second form of currency). The cards come in 5 different categories and each have a special ability. Cards will also earn you victory points, either scoring immediately or at the end of the game.

After playing your chosen card, the rest of your hand is passed to the player on your left (or right some rounds). Once all the cards in a hand have been played, the round ends.

When I first got a copy of the digital version of Among the Stars, I was a tad underwhelmed. The game was quite buggy, much to my chagrin. However, I can attest that developer Cublo has been very active in not only quashing bugs from the app, but also addressing player gripes. One of my earliest complaints (that others shared) was the lack of being able to skip the AI turns. Solo games just took too long. Thankfully a recent update has added that much needed feature. I’m glad Cublo is listening.

The controls for the app are fairly intuitive. You can pan and zoom around your station, and you can also check out your opponent’s stations with a click. When ready, you can simply click to place a card, and a contextual menu will pop up asking how you want to play it. I will say that the small art can make it hard sometimes to see which cards you already have in your station. However, after you choose a card to play, the app will label all cards in your station with text, so you know what you have. It would have been nice for a way to have that text always on though.

As I always consider a must with digital apps, Among the Stars eases players in with a guided tutorial for new players. While it does a decent job of teaching players the game,  it could be a bit more thorough. The tutorial didn’t touch on the faction powers or missions at all, so once those were used in a mission, it took a while to figure out what they were.

Speaking of, the game does include a short, yet very fun single player campaign that is 8 missions long. These each altered the victory rules in some way, and also tried to tell a bit of a story about each race. I thought they were a great way to add some replay value to the game, although I wish there were a lot more than 8 missions. The app also has leaderboards to keep track of your high scores (currently ranked #4 on mission 5!)

Other than that, there is the usual solo mode vs the AI, pass and play, and online play, all of which are fairly standard. The app lets you customize the game by adding in race powers or mission objectives if you like.

Finally, I was slightly disappointed with the audio in the Among the Stars app. The music felt really generic and the sound effects sounded like they took the windows “click” noise and just used that. You are mostly going to want to play with your device muted.

Overall Cublo did a great job of in bringing Among the Stars on our tablets. They have quashed many of the early bugs and continue to support the game by addressing player complaints. There are a variety of ways to play the game, with campaign mode easily being my favorite. They are supposedly working on new missions for that, which would be great because I blew threw the original 8 in about a week.

While not perfect, Among the Stars for iOS is worth getting if you are a fan of card drafting games. I’ve played it a ton already and am looking forward to some expansions coming to the app for added variety.

Final Score: 4 Stars – A solid translation of a great card drafting game that only keeps getting better.