We review America, the trivia party game published by Bezier Games. America is a quick playing party trivia game where there are many ways to score points, in addition to just knowing the right answer. 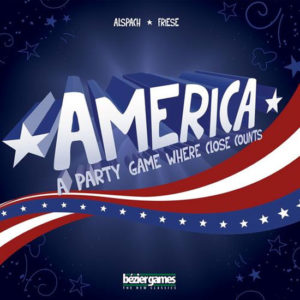 This, like its predecessor games Fauna and Terra, presents players with a category. Each player is trying to get as close as possible to the right answer, bluff others into selecting a wrong answer, or just continuously mooch points from the stronger trivia players at the table. As the title suggests, all the categories are centered around American history, pop culture and Americana.

America is a trivia party game for 2-6 players that takes 45 minutes to an hour to play. It plays best with 4 players.

After plopping all the components out of the box and laying out the board, setup is pretty much complete. Players will take turns guessing answers to the current topic shown on a variety of subject cards which sit in a box hiding the answers at the bottom of the cards. Guessing tokens record the players answers.

If players guess the exact right answer out of State, Year, and Number types of answers, they earn 7 points. Any answers adjacent to the correct answer get 3 points. Players can also gain points from guessing that no player has a correct answer. Turn order rotates so everyone will have a chance to guess early.

Players are free to use their tokens to select any answers on the board including selecting multiple answers for the same question. If they guess incorrectly (meaning not even scoring for adjacent answers), those tokens stay off the board and the player must wait to retrieve them.

After 6 question cards (yes, only 6), the game ends. The player with the most points wins.

First, let’s talk about the negative. There’s a lot of randomness in the questions. Some players who consistently do well at trivia games like Trivial Pursuit may grate at the small number of categories and kinds of factual elements to cover. This is meant to be a party game, so having all the knowledge about, as an example, the iPhone, is better than knowing a little bit about multiple different kinds of smart phones. Even some obscure facts such as where the iPhone was invented become important.

This gets to the second negative, the game is incredibly short. This is specifically the intention so that multiple games could be parsed out through the evening or so that the game acts as a super-filler for a larger group. Hardcore trivia fans will once again be scratching heads at this instead of being able to scratch their trivia itch.

The positive really comes out in the interaction between players (two player games are not that interesting). Trying to figure out which players at the table have the right answers is a big strategy, especially if the category is difficult. Just gobbling up lots of points from having an adjacent answer becomes an interesting tact because turn order plays a big role in who has control to get the right answer.

The questions are pretty solid a well. The pictures accompanying this article will keep the answers secret, but rest assured, these aren’t straightforward “Who killed Abraham Lincoln?” types of questions. The game, stays light and fun with a wide variety of random, useless information.

Fans of trivia for trivia’s sake will enjoy America. The idea of asking questions for answers better left to Wikipedia and Google hearkens back to many Trivial Pursuit moments, but without the aggravating play time. This is a near perfect opener for game night due to the short game time, but it really won’t be what hardcore trivia fans want. For the style and scope of the game, America fills a sometimes wanted niche.

Final Score: 3.5 Stars – As an appetizer of trivia for a heavier evening of gaming it works. However, hungrier fans will be reaching for games with more quantity of trivia afterwards.