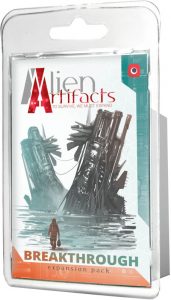 “Here. Review this,” said….Andrew? He briefly glanced up from a significant pile of wooden cubes to hand me the newest expansion to Alien Artifacts (review of the core game here), Alien Artifacts: Breakthrough.

“Where is Tony?” I asked as I took the game from his hands.

“Uhhh….you saw him leave. He pulled his best Matthew McConaughey and went Interstellar.”

I looked around. Luckily, there were no bookcases nearby from which other-dimensional Tony could yell at me.

Turning back to Andrew, I contemplated asking him why he didn’t want to review the expansion but remembered he doesn’t believe in fun.

Andrew Smaug didn’t even look up from his glorious cube pile for a response.

The technology, ship, and planet cards get shuffled into their respective piles during setup. The Breakthrough cards, the new mechanic added to the game by this expansion, are placed face down next to the Resource deck.

Whereas the first expansion was themed for planets, this expansion is technology focused.

The biggest change is the addition of the new Breakthrough cards. They are resource cards that are kept separate from the Resource deck at the start of the game. All 15 cards are very similar—one side has gold asset symbols with an Exploit matching card type and the other side has FOUR research symbols with NO matching card type. These cards come into play when one of the new Inventium planet cards are exploited or settled.

Another example of the tech focus is that EVERY settled Inventium planet reduces the cost to Develop tech by one (it also reduces another cost by one). This is different than the base game where every planet reduces one type of cost by two.

Finally, the new ships make scoring techs easier. The logistics side of the new ships all let you draw an additional card when a tech is first sold to a corporation (you can still only score the card once). The operational side allows you to pick one of your sold tech cards and try to score it again instead of attacking.

I really enjoyed Alien Artifacts: Breakthrough! The tech strategy is much stronger after this expansion. The ships allow you multiple ways to score your tech cards. The new Breakthrough resource cards, as well as the new planets, make it easier to both Develop techs as well as Gain Revenue to score your sold techs for more points. And I LOVED many of the new technology cards. They provided new ways to score points or to enhance your faction.

There are also improvements outside of the tech world. Breakthrough cards can generate more credits when you Trade Resources. The new planets are more flexible because they reduce costs for two different cost types instead of one. Alien Artifacts: Breakthrough is easy to incorporate and is not complicated to learn and, most importantly, does not materially dilute the existing decks.

The expansion is not perfect. It has one glaring weakness. There are STILL no new alien system cards. Quoting my review of Alien Artifacts: Discovery, “You are still stuck with the same five from the base game. These can get very repetitive, which is even more alarming in a game that provides replay value in every other aspect of the game. Hopefully, this will be addressed in future expansions.” Alien Artifacts: Breakthrough did not.

Finally, if you felt that the game length was perfect or already a little bit too long, the Breakthrough resource cards lengthen the game because it will add up to 15 additional cards to the resource deck when the Resource deck discard is reshuffled.

Hits:
• More variability and replay value
• Improved the scoring of tech cards
• Can easily be mixed with base game and expansion
• Does not materially dilute the existing decks

Misses:
• STILL no new Alien System cards
• Can increase playtime if many Breakthrough cards are added during the game