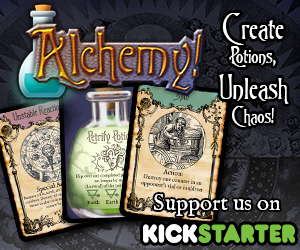 With the rise in popularity of Harry Potter, the art of alchemy has moved out from being only in the realm of fantasy aficionados. Since Harry took his first potion making class on the big screen, people became aware of the art of potion brewing. Unfortunately, we can’t brew these magical potions in real life. What we can do though is enjoy a new card game that plays on this theme. Alchemy, currently in funding on Kickstarter, is a game about racing your opponents to brew the most potions. Find all about this quick playing card game with our full Kickstarter preview. Read on!

Alchemy is a pattern matching card game for 2-5 players that plays in about 30 minutes. Alchemy plays best with 4 players.

In Alchemy, players are racing to try and complete as many of the available potions as they can. Each turn, players will be transmuting components into elements to help make their potions. As players move elements into their cauldron, they can then use them to start brewing potions. Players also will have action cards and equipment cards they can play on their turn to either help themselves or hinder their opponents. Once all the available potions have been brewed, players count up the total number of doses of each potion they have available. The player with the most doses is the winner.

The game starts with a number of random potions added to the game based on the player count (2x per player). These cards are placed face down to start the game. Each player then takes a cauldron card, a vial card, and 4 alchemy (action) cards. One player is chosen to go first and rounds proceed in a clockwise manner.
A player has a few options on their turn:
0: Flip over 2 potion cards: At the start of the game, all potion cards are face down. A player picks two of them and flips them over. This helps even out the first player advantage as they only know the components of two of the available potions to start with.
1. Fill component cards: There should always be 4, face up component cards at the start of your turn.
2. Draw 2 alchemy cards into your hand.
3. Transmute: Choose one component card and discard it, gaining the elements listed on the card. These element counters are added to a player’s cauldron.
4. Pour: A player may move 1 element token from their cauldron to their vial card. A vial can hold up to 4 elements.
5. Discard: Players have a hand limit of 4 cards at the end of their turn.

In addition to those 5 steps, a player may take any of the following actions on their turn at any time:
Create a potion: If your vial contents exactly match the requirements for one potion card, take that potion card and move the tokens from your vial onto the potion. This represents the amount of doses of the potion you have.
Empty a vial: If a player has beaten you to a potion you were working on, you can dump out the contents of your vial to start fresh. The components are lost.
Play one action: You may play one alchemy action card from your hand per turn.
Play one equipment card: You may only have 1 equipment card in play at a time.
Drink a potion: Once per turn, you may remove a counter from a potion you’ve brewed and gain the effects listed. However, since doses are victory points, this can be a costly action.

Rounds proceed in this manner until the last potion card is brewed. When that happens, each player counts up the number of doses of potions they’ve brewed and the player with the most is the winner.

I’m not going to lie, I wasn’t sure if I’d like Alchemy when I first looked into it. It seemed OK, but nothing too special. Well I’m happy to admit that I was pretty wrong with my first impressions. Aviary Games has done a nice job with this card game. Alchemy is a fun, quick playing and well balanced card game.

One of the great things about Alchemy is how easy it is to learn. Basic pattern recognition is an easy concept for anyone to grasp. That’s one of the things that make Ticket to Ride such a great gateway game. And I think the same could be said about Alchemy. This is a perfect game to play with your friends who are still enjoying Rummy and Uno. The rules are easy enough to explain in a couple of minutes and the game’s playing length feels about right. If you are a fan of Ticket to Ride, I think you’d also enjoy Alchemy. The complexity level is about the same, but you get a new experience in Alchemy.

As easy as Alchemy is to learn, that’s not to say that there isn’t anything here for the gamer at heart. Alchemy is still a lot of fun thanks to the nice variety in the action and equipment cards. This will have players jockeying for position throughout the game and also cause some heated battles between players. More than once, I’ve seen two players hurt each other with action cards, just out of spite. This can create some memorable occasions. There is a healthy dose of “take that” cards in Alchemy, so if you don’t enjoy that kind of player interaction, be forewarned.

One of my favorite aspects of the game though, would have to be the potions themselves. First, you only play with a handful of them each game, so this allows for a good amount of reply value. But what I really like is how, once you’ve created a potion, you can then drink its contents to gain a benefit. But these can be hard decisions to make because you are also drinking your victory points. I found myself rarely drinking a potion unless its effect would be something really powerful in my current situation. Although in one game, I did use a dose just to hurt a fellow player, out of spite from an earlier card he played on me. So I guess it’s not always that strategic.

Finally, the game balance seems to be pretty spot on. We are only using a prototype game, but as it stands now, most of our games have been very tight races. Our most recent game came down to the tie breaker rule. I enjoy games that are balanced enough where everyone will be competing down to the wire.

Alchemy is a fun card game for 2-5 players that is a lot deeper than it appears at first glance. It’s easy enough to learn that it can be played with your non-gamer friends, but it can be strategic enough for the gamers at heart to. Alchemy is worth a look if you are in the market for a card game that’s both flexible with whom it will appeal to and also uses both unique and familiar mechanics.