We review the Age of War Card Game, published by Battle Born Games. This quick playing card game seeks to recreate the gaming experiences of the late 80s when Axis and Allies ruled our gaming tables. 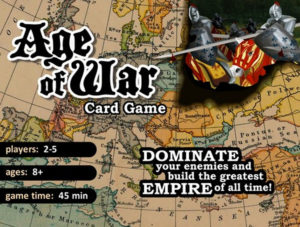 Readers who have lived through the 1980s or can mentally transport themselves back to this time are witness to a unique period in human culture. This was the last decade before the connected world of cellphones and the Internet. For most of the decade, board gaming in America was dominated by parlor family style games, hex and counter wargames, or massive war games such as Axis & Allies.

There are some games today which completely capture that feeling, where hours of a Saturday afternoon are devoted to a single game moving little army men around while dice decide their fate. A small, independently produced card game seeks to retread this era in less than an hour’s time.

Age of War Card Game is a card game with a medieval war theme for 2-5 players that takes 45 minutes to play. It plays best with 3-4 players.

By playing cards to various colored piles, also known as Kingdoms, players take control of lands from the medieval world. By building cities and castles, mustering armies, and attacking opponents players attempt to control a certain number of kingdoms to achieve victory.

Age of War Card Game is a compact game of cards and two dice. The card art and graphic design is amateurish (with images largely pulled from the public domain) and the dice standard with white pips. Much of the full rules of the plastic coated cards are contained on the cards themselves, with varying degrees of clarity. This means that if the rulebook doesn’t explain the card, players are left to the card’s very small text to understand the rules.

The single page front and back rulebook is mostly clear, but it does take some game acuity and presumptions in certain places to make it through. There’s a reference for the cards, but not all are explained. Overall, the rules function, but it’s not as friendly as players likely need.

Players start a game of Age of War Card Game by randomly drawing “Standard” cards and “Territory” cards. Each turn, players draw one Standard card and a Territory card, if there are any left. If not, two Standard cards. Players must play one Territory card if they have one in their hand. They can also take actions through the playing or manipulating of cards or attacking other players.

On every turn, players have the option to take three actions from the following choices: play a card, attack a player, or upgrade a city or castle to a metropolis or citadel respectively. Playing a single card might be an army unit, a city or castle, a mission, or a gold card to stock up their supplies.

Once players have armies, they can attack other players if they have more territories of a certain color than the targeted opponent and if the opponent’s territory is of the same color or an adjacent color. Adjacency is determined by a reference card with a color wheel showing where colored territories are in relation to each other. For example, orange Egypt is next to red Turkey.

The sequence of drawing cards, forming armies, and attacking resolves to a finish when one player has a specific number of colored sets of territories. Attacks are resolved with each player stacking their army cards and flipping over their cards one at a time. Cards are compared in a rock-paper-scissors mechanism. Swordsmen defeat Spearmen. Spearmen defeat Cavalry. Cavalry defeat Swordsmen. There are Archers, Generals, and other elite units which also add to the strategy. The winning player collects territories from the loser.

Once a certain player has control of a certain number of territories (based on player count), that player wins.

Age of War Card Game is not a title that has a tremendous amount of resources behind it. Its mere appearance could be enough to turn off some gamers. This impression is not without warrant, however, because the game’s welcome depends greatly on the background of players. It will either be received at worst as a yawn-fest and, at best, mildly enjoyable.

The core of these opinions will likely be centered around the mechanisms for taking territory and resolving combat. The act of stacking unit cards only to have the resolution feel somewhat arbitrary from a rock-paper-scissors mechanism can be disheartening. There is some skill as evidenced by research into rock-paper-scissors psychology, but usually, it does feel random.

This mechanism really becomes a flaw in any highly contested end game between two players. Much like RISK, a multiplayer game can end with two different players battling it out for supremacy with stacks of cards. The resolution of these combats and the back and forth battle can make the game feel slow to players who have no chance of winning.

This wouldn’t be so bad if other players really had a chance of coming back in the end game. Once players are on the losing side of a winner’s downhill snowball, it’s hard to come back. Strong players get stronger, and if this happens purely by chance from the card draws, which it can, then really the entire game experience is predicated on luck of the draw. If players manage to get cities or castles, this randomness can be mitigated, but it’s very prominent in the early game.

Where Age of War Card Game wins is in nostalgia factor. The card design and gameplay remind this reviewer of wargames from the 1980s. That feeling, captured in an hour, is sufficient for some of the randomness and low price of the game ($7.95 at this time). Readers should just know what they’re looking for in a small card game before purchasing this title.

The 1980s weren’t the best years for games. The big wave of Eurogames had yet to hit American shores. Age of War Card Game may succeed at capturing the feel of those games, but that is not necessarily a feat to be relished. Games have evolved and the mechanisms of this style of game, even when presented as a light wargame, offer less to enjoy. It can be satisfying to the right group, but likely that group is very forgiving.

Final Score: 2 Stars – It’s ugly to look at and gets a bit stale near the end, but the play can have the interesting feeling of a time-jump to a 1982 rainy day playing a war game.