We review Age of Dirt, a prehistoric era board game published by WizKids Games. In Age of Dirt, players are trying to be the first to reach 10vps by sending out their workers for various resources. 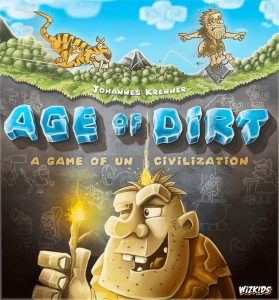 When I hear “let’s play a civilization-building game,” my mind turns to the splendors and advancements of the first nations to exist, with their advancements in culture, science, and technology. The last thing I am thinking about is early hominids in their hunter-gatherer phase. This is the time in civilization development that Age of Dirt by WizKids Games chose to focus on in a light-hearted and lightweight game. Read on to see if Age of Dirt is able to survive the winter, or whether it gets mauled by a sabretooth tiger.

Age of Dirt puts players in charge of a clan of Neanderthals, with the goal of being the best clan in the land. Each player begins play with four clan members, a drum (to summon workers), a spear (to fight off tigers), and two clan cards that give you special powers and allow you to score points.

On a player’s turn, they can take one of three actions. A player can send out clan members, which they put into one of four resource areas in the hopes that they will return with those resources. Players can spend resources they possess on storage upgrades, repairing their spears and drums, and drawing and building clan cards.

If a player calls back clan members, they take all the meeples in a resource area, receive a bonus depending on which area is chosen, and toss the meeples into The Passage, which is a meeple tower that can catch the meeples as they fall. Every player then can use their drum to whack the tower, hopefully causing more of their meeples to fall out. For every meeple of a player color that falls out of the tower, players collect that number of resources.

As soon as a player has 10 victory points from playing cards, they are immediately declared the winner, leader of the most successful clan in the valley.

Age of Dirt delivers on its promise of being a light worker placement game. It delivers so much so that the game is practically forgettable as soon as it leaves the table. While the gameplay is quick, it is extremely repetitive, with players cycling through actions over and over until one person gets lucky enough to have the right cards in hand to earn 10 points. That the game ends as soon as a player hits the 10 VP threshold would usually be a mark against it, but the fact that it hastens the end of the game quicker is a positive…honestly.

This leads us to ask the question “What is wrong with Age of Dirt?” and the answer, to our surprise, is “nothing.” It’s not a broken game, it’s not a bad game, it’s just terribly uninteresting. The major decision in the game is to decide when the optimal time to send your workers into the meeple tower is and hope that they all come out. Even if they don’t, you or another player can give the tower a firm whack and have them all tumble out. There was rarely a time when a stern rap on the side of the tower didn’t cause everything inside to fall out. If that’s one of the drivers of your gameplay, then it must do a better job.

We suppose the only hint of strategy that Age of Dirt could possibly provide is that the meeples in the resource areas are hidden, and you must keep track of who is putting which meeple where. Unfortunately, this type of memory/hidden information aspect did not make the gameplay any more interesting, especially when playing with only two players. If you decide you want to give Age of Dirt a try, do your best to fill your table to the maximum number of players.

It must be noted that the quality of the artwork and components shines in Age of Dirt. Klemens Franz is a master of adding lots of Easter eggs and hidden gems in his art, and Age of Dirt is no different. There are cute illustrations even on the inside of the area boxes and the Passage. The amount of care that was given to the most minute details is apparent. The components, which have a truly active role while playing, are made of sturdy stock and can handle the whacks and handling they would take during a playthrough of the game.

Should Age of Dirt be relegated to the depths of history, never to be discovered? No, it definitely has a place for some gaming groups who are looking for a light-hearted, very casual game that has some really beautiful art. Some may also enjoy the clever, albeit completely luck-driven, meeple tower mechanic. This might be a good fit for your gaming table—unfortunately, it was not so for us.

Final Score: 2 Stars – Cute, clever, and forgettable. Might be a hit with your table.

Misses:
• Gameplay is extremely repetitive and boring
• Scoring based on getting the right cards in hand
• Meeple tower does not serve as the best randomizer