We review the digital version of Aeon's End, published by Handleabara Games. Aeon's End is a cooperative deck building game where players must work together to defeat a monster and his minions. 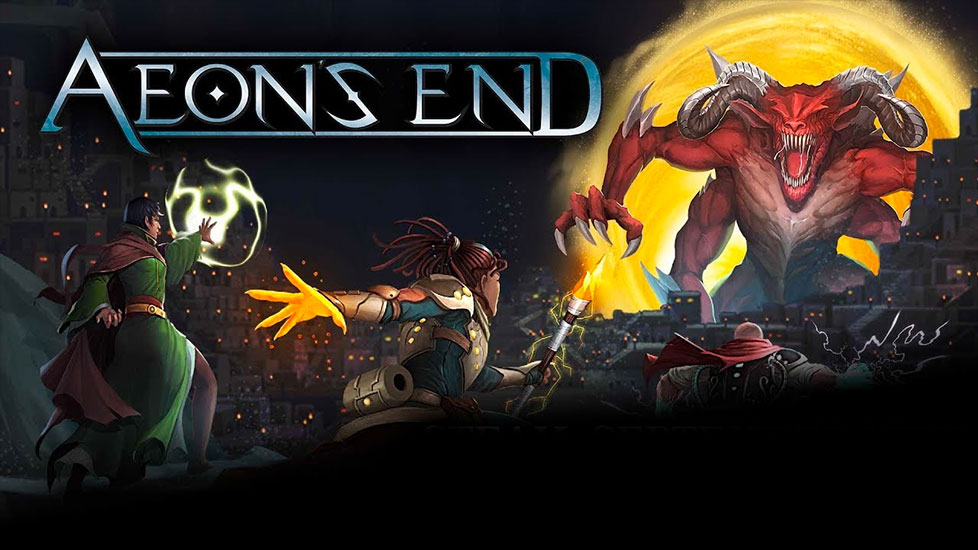 When it comes to deck-building games, the digital realm is a great place to experience one. Not only do you get to avoid the long clean up time of tearing apart decks and sorting cards, but you don’t have to constantly reshuffle your cards every few rounds. That and you get some wicked animations and sound effects to really bring a theme home.

Today, we are going to take a look at a unique deck builder in the form of Aeon’s End. This cooperative game will have players trying to save Gravehold from a host of demons. This review focuses on the Steam version of Aeon’s End, which is also available on iOS and Android.

Aeon’s End is a cooperative game where up to four mages band together to battle monsters seeking to destroy humanity. The player(s) (local pass and play or solo only in the app) controls a unique mage and will purchase new cards throughout the game to build their deck. Cards come in three flavors: Gems (the game’s currency), Spells (used to attack monsters), and Relics (action cards with a variety of powers).

There are a few unique things about Aeon’s End that set it apart from other deck buildings. First, there is no shuffling of your deck. Once you run out of cards in your draw pile, you flip over your discard pile and that’s your new deck. This can lead to a lot of strategic options when discarding.

The turn order in Aeon’s End is also not set. Each round, the initiative order of the heroes and Nemesis are shuffled and revealed one at a time. This definitely adds some tension to the gameplay as you don’t ever quite know when the monsters will be screwing with you.

To win, you have to defeat the Nemesis by reducing its life to zero. This is done through spell cards. Spells must be added to an open breach before casting, and aren’t actually cast until the start of the hero’s next turn. Players can have up to 4 breaches available during play, with at least one unlocked at the start. Players will also have to focus their attacks between the Nemesis and the minions he summons.

If the players can defeat the big bad guy before the heroes all die, or Gravehold is destroyed, they win.

My fellow reviewer, Brian B, is always raving about how much he loves Aeon’s End, so I figured I’d give it a try. I can definitely see what all the fuss is about because it’s really quite a clever deck builder. It does a good job of taking many of the deck building tropes and turning them on their head. You don’t have to discard your hand at the end of each round, there is no shuffling of your deck, and the round order is never set. I was pleasantly surprised at how much I enjoyed these new mechanics.

Aeon’s End also boasts a solid amount of replay value. At the start of a match, the player can choose up to four heroes and an adversary to face off against, all of which are unique. For the market cards, there are nine cards in total for each game. Players can choose the ones they want to use, or just take a random assortment. But all combined, this gives Aeon’s End a lot of variety.

As far as the digital implementation goes, I found it to be another solid offering from Handleabra games. It was overall bug-free and there were nice animations and sounds effects throughout the match. There is also a guided tutorial that will teach you the basics of the game, so even new players can jump right in and start playing. My favorite part of the digital game has to be the stats at the end of the match. You can see how you did vs the monster, with your record alongside global stats. If you like numbers, then this will be right up your alley.

The only glaring issue I ran into was the omission of multiplayer mode. Digital games are a great way to play games you love with people in other locations, and unfortunately, Aeon’s End doesn’t offer that. Whether that’s a big deal or not really depends on how you like to play digital board games. I know lots of people only play solo, so perhaps this isn’t a miss in your book. But as someone who regularly games with others online, I was sad to see this omission.

If you are looking for a new deck builder to add your digital library, Aeon’s End should definitely be on your radar. The implementation was rock solid (other than the lack of multiplayer), and it has a few other bells and whistles to improve the game experience. For fan’s of Aeon’s End, this one is an easy choice. You get the same game experience without any setup and teardown time. For newcomers, the guided tutorial will get you up and playing in no time. It’s available on Steam, iOS, and Android, so choose the platform that fits your preference and get to saving Gravehold.

Hits:
• Lots of variety in the gameplay
• Good music and animations
• Easy to control multiple hands
• Stats at the end!

Misses:
• No multiplayer other than pass and play