We review the Adrenaline Team Play DLC expansion from CGE Games. In this expansion to the great area control game Adrenaline, players now play as part of a team to try and score on their opponents. 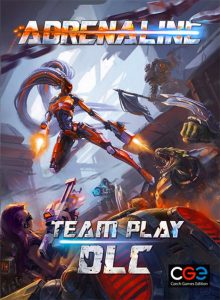 One of my favorite games to come out in 2016 was the first person shooter (FPS) themed board game Adrenaline. It actually came in at #5 for my rankings for the year and it’s also actually an area control game where players are the area being controlled, but the theme has players running around and shooting each other. It was really the best adaptation of the FPS genre on our tabletops I’ve yet to see.

Recently, game designer Filip Neduk decided to give us more Adrenaline goodness and brought us an expanded Adrenaline experience in the form of the Adrenaline: Team Play DLC expansion. For those not up on video game lingo, DLC stands for “downloadable content”. Note: you don’t actually download this expansion.

There are three main components to the Team Play DLC expansion. A brand new character, special abilities, weapons for each character (both new and existing), and the new Team Play mode of play.

The new character is Echo, a cyborg who dual wields pistols. This orange-colored character can be used in either the core game or in Team Play mode.

Each character now has a special ability, such as Sprog’s venom ability or Banshee’s Mind Control. Abilities trigger the unique weapons that each character also now possesses. Players will choose from one of two available guns to use at the start of the game. Both of which will key off the characters special ability in some way.

Finally, the new Team Play mode splits the game into, well, two teams. This mode always uses all six characters in a three on three affair. The main difference here is that each team gets one action with their characters each turn. So team one will take one action with all three of their characters, followed by team two doing the same. Team Play also introduces Adrenaline mode where a character can take a point of damage to gain access to the adrenaline actions for the round. There are a few other scoring tweaks in this mode, but overall it’s still mainly running around and shooting other characters.

One of my core tenants of an expansion is that I want it to add variety to the gameplay and/or address the core game’s flaws, without adding a ton of overhead. I don’t want to feel like I’m learning a whole new game when I add in the expansion. Thanks to its modular nature, Team Play somewhat succeeds on that front.

The new character was an easy add-on for Adrenaline. It ups the game to 6 players in a game where the more is definitely the merrier. Frankly, not much else needs to be said on that as in the core game, characters were different in theme only.

I was also a big fan of the new character-specific weapons. Those, combined with the special abilities, finally gave each character their own unique feel. The downside was that I found my self almost always using the character specific weapon over the ones you can pick up in the arena. Over the course of one game, I only picked up a total of 3 guns because I was favoring character weapons so much.

I think this is because character abilities are tied to using your guns. And since the abilities are activated for free every round, you really want to get as much mileage out of them as you can. So in that regard, I would have preferred the character abilities to be more weapon neutral, so I didn’t feel shoehorned into trying to use my character guns as much as possible (at least you have a choice of two of them at the start of the game).

Regardless, the new guns and abilities can be used in either team mode or the standard game, making it an easy add-on for players that want their characters to feel a bit more special.

Speaking of Team Play, it really does change things up a bunch. However, I’ve forgiven CGE from breaking my cardinal rule of expansions because it addresses the major gripe I had with Adrenaline: not being able to play with only 2 players. Two player mode is back on the table with team play. However, it does involve each player controlling three characters. It’s not exactly ideal, but as you only take one action with each character, it wasn’t too bad. Turns are still fast and frantic, and damage flies around the board pretty quickly.

However, if you want to play with 6 players, this is definitely going to be the way to go. This is primarily because it really reduces the downtime between turns. Instead of having each player ponder their two actions, and try to avoid fire from 5 other players, they can coordinate their decisions. Plus, with only one action, turns fly by. All in all, this is my new favorite way to play Adrenaline with 5 or 6 players.

Despite ratcheting up the complexity, Adrenaline: Team Play DLC was a win in my book. Even if you just get it for the character abilities and guns, it’s a worthy purchase. But the Team Play is a fantastic mode for larger groups, or to just finally get this game to the table with only two players. And I have to give CGE props, the plastic tray in the expansion perfectly fits into the core game box, almost like it was planned from the start. Adrenaline Team Play DLC gets a nod of approval for that great idea alone. 🙂

Hits:
• Can be played with only 2 players now, or 6
• Characters are now unique
• Storage tray fits in the core box perfectly
• A new method of play

Misses:
• Abilities tied to the character guns feel restrictive
• To play with 2 still requires all 6 characters