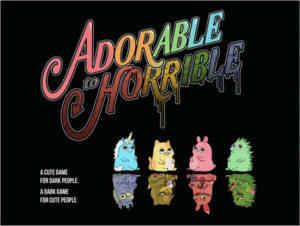 Adorable to Horrible is a game designed by two long-time friends, Erik Flesher and Kirk Wyckoff. It is a light-strategy, adult-party game for ages 18 and older and supports 2 to 4 players. I would probably not seek out playing a game with an adult-oriented theme or avoid playing if asked, but this game does not take itself too seriously, so I did not dwell on the theme, but focused on its gameplay.

Any of the adult-oriented text on the cards is presented in a manner to support the theme, but the card artwork is cartoony and wacky (at least in our prototype copy). Don’t get me wrong, this is not a game to be pulling out around the kids. The game has some subject matter that certain adults may not even be familiar with.

Adorable to Horrible is now in funding on Kickstarter so let’s dive in and take a look.

In Adorable to Horrible, players act as cutesy animals called The Adorables (The Blue Unicorn, The Red Bunny, The Yellow Kitten and The Green Hedgehog), but transform to nasty animals by performing horrible acts as they work against the other players to push them towards The Nasty Void and subsequently attempt to keep themselves as close as possible to the Happy Place. This is all done through clever card-play in order to orient their characters on the game board in a manner that best suits their horrible acts.

Players start the game with 4 character markers and 3 cards drawn from the deck. A starting player is selected by finding the player who admits that they have committed the most horrible act than any other player. Beginning with the start player, play will continue throughout the game in clockwise order.

The card deck is comprised of 5 types of cards:

So on a player’s turn, they play 1 card or 2 cards (Rainbow) and if a Movement card is played they can:

A player may also discard a card (except for a Movement card). If a card is discarded, then the player must move one of their character markers 1 stone downwards towards The Nasty Void. Of course, their opponents may play Purple cards as reactions. When their turn is over, the current player draws back up to 3 cards and the next player starts their turn.

Let me first say something about the theme of this game. Adorable to Horrible does not beat around the bush about being adult in nature. The card text and imagery is not for the faint of heart, but it attempts to purvey the content humorously, not taking itself too seriously. The very nature of the cartoony art on the cards supports this idea. The game board depicts paraphernalia that also support the theme.

Although this isn’t a theme that usually appeals to me, I think it can appeal to others. I got a good feel for it once I read some of the flavor text along with looking at the imagery. After that, someone could pretty much avoid the text and imagery and just play the actions on the cards if the theme was a turn off.

The game is described as a party game, but I don’t quite see it as that unless you are playing the drinking variant. Adorable to Horrible is really more of a take-that game. I generally like this genre and at 3-4 players this game is extremely interactive. I agree with this game being recommended for 3-4 players and not at 2 players since I found playing with 2 players was not as interesting as with higher player counts, the game became very swingy (being that there are less movement cards than the more powerful cards) and was anticlimactic as the game ends when one player is eliminated.

The most interesting mechanism in the game is the one that supports its theme and take-that gameplay. It is the push ‘em mechanism where no two characters can end up on the same stone at the end of a move. When several characters are in close proximity, a move that causes a chain reaction push is most satisfying, even if one of your characters is the recipient. Just as long the other players’ characters are pushed ahead of your own. Bwah, hah, hah!

The most interesting cards to manage in the game may be the purple The Happy Rainbow and The Dark Rainbow cards. They are very powerful, but must be played in pairs in order to trigger their effect. Since a player may only hold three cards in their hand, having only one Rainbow card is hampering or having one of each type (Happy and Dark) is extremely hampering, especially when a player draws a movement card with their own color. Since movement cards must be played and cannot be discarded, a dilemma arises. Do I wait to draw a matching Rainbow card or do I discard the one I have, take the movement penalty and hope for a better card to play based on the situation.

If you are looking for a light strategy game that brings the “take-that” attitude with a bit of chaos thrown in, you should check out Adorable to Horrible on Kickstarter. It’s a game that does not take itself too seriously, but is defiantly a game for adults only. If you are the type of person that enjoys games with adult themes, such as Cards Against Humanity, then Adorable to Horrible is worth checking out.

If you’d like to become a backer, pledges start at $35 for the full game and stretch goals. Adorable to Horrible is scheduled to be in backers hands in November of 2016 and you have until Wednesday, June 15th to become a backer. Head over today and check it out.