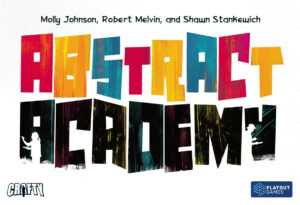 Back in college, I was a fine arts major and received my BFA in painting (no joke). I remember one specific class where the professor had us all work on the same piece of canvas as we created an abstract painting. Personally, I thought the exercise was a little dumb, but on the plus side, it prepared me for today’s review of Abstract Academy from Crafty Games. Designed by Molly Johnson, Robert Melvin, and Shawn Stankewich, Abstract Academy will have you trying to earn points as you paint a canvas with your opponent.

Abstract Academy is played over three rounds, each of which are pretty similar. On a player’s turn, they will play one of their three cards to the grid on the table and then draw a new card. Each card has several paint swatches in red, blue, or yellow. The cards will need to be contained in a 4×4 grid; however, the grid borders are not determined at the start of the game. That means that cards you play early in the round might not end up in your scoring area.

The rounds ends once all 16 cards have been played to the grid. The two rows closest to each player are their scoring rows. They compare the colors and shapes in their scoring rows to the goal cards, claiming any they accomplish. If there is a tie for a scoring card, the player with the teacher’s pet card gets to claim it. Then a new round begins.

Sometimes a simple game in a small box can surprise you with an entertaining experience. And that’s what happened for us with Abstract Academy. After reading the rules, I didn’t have a lot of expectations for this title, but it ended up being a great little filler game. It takes about 20 or so minutes to play, and the rules are quite easy to teach. These are all things you want in a filler game.

One of my favorite mechanics with Abstract Academy was how the grid is formed. I loved that the dimensions aren’t set at the start of a round, so you don’t know if a card you play will end up being in your scoring area or your opponent’s. This helps give you a bit of flexibility with your card choices. Say you’ve got a hand full of yellow cards and the goal card wants the fewest yellow areas. Well, perhaps you can plop a card down and work the grid, so it ends up in your opponent’s area. This bit of uncertainty was a great addition to the game.

I also liked how the tie-breaker system works in the game. Whoever has the teacher’s pet card gets to win any ties for a scoring card. Yet that card doesn’t just stay with one player. As soon as you use it to break a tie, the teacher’s pet card goes to your opponent. We ended up calling the card the “possession arrow” because it remained me of that rule in college basketball. Regardless, it was an elegant solution for an important distinction in the game.

My biggest gripe with the game is probably how the scoring of the inspiration cards work. Each round you get a secret goal to work on. These usually ask you to create some sort of shape (4×4 square, “L” shape, etc…) of one color. The problem is that your shape can’t have any overages. So, if I need to make a 4×4 square and there is an extra color swatch of the same color next to it, it no longer counts. And there are only three colors in the game, it makes it really difficult to isolate colors that finely. This is further worsened by the fact that these cards are only worth 2 points, the lowest values in the game.

My only other complaint with the game is the crappy box that it comes in. The game only consists of cards and a rulebook. But the box is a card box that opens at one end. Trying to slide in two decks (you must split the cards in half to fit) and the rulebook is an exercise in frustration. My deck box has already taken a beating. It feels like Crafty Games went with the cheapest option here and would have much preferred the standard lift top box.

Overall Abstract Academy is a solid filler game that’s easy to get to the table. The rules are easy to explain, and the gameplay is more engaging than you’d expect with such a light ruleset. I really enjoyed how the grid building worked and how it let you try and outthink your opponent’s. While I wish the game box was better, the rest of the components were great. If you are looking for a game that you could play with your partner or a non-gamer friend, Abstract Academy is worth checking out.

Final Score: 3.5 Stars – A fun little filler game that’s easy to get to the table and has some clever mechanics.

Misses:
• Game box is crappy
• Inspiration cards are too hard to score