We review the A Game of Thrones: Hand of the King card game from Fantasy Flight Games. In this light game, players take turns controlling Varys as he attempts to influence the different houses of Westeros. 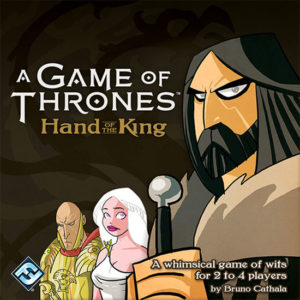 If there was ever a story that was meant to be a board game, the A Game of Thrones series by George R. R. Martin is it. The interwoven plots of betrayal, lust for power, violence, and scheming perfectly fits choices loved by board gaming fans.

Fantasy Flight Games has the rights to produce A Game of Thrones titles and their flagship release “A Game of Thrones: The Board Game” hits like a White Walker’s sword shattering an iron shield. However, players looking for some Westeros flavor while they’re waiting for their next game to start may find a smaller box of betrayal suits their thirsts better.

A Game of Thrones: Hand of the King is a card manipulation game for 2-4 players that takes 30 minutes to play. It plays well with any player count.

Varys, the Spider, is a character in the novels who moves behind the scenes manipulating plots and the fortunes of other characters. In A Game of Thrones: Hand of the King, players are moving the Varys card throughout a grid of characters from various houses in an attempt to capture the most characters from each house.

Small cardboard tokens, square character cards, and mini “Companion” cards are the components for this game. The card quality is excellent and the tokens serviceable. The art on the included cards is cartoonish, but with a more anime meets Genndy Tartakovsky style. The illustrations succinctly capture the nature of each character, even if non-Game of Thrones people don’t notice.

A player takes a turn by declaring their intention to move the Varys card (there’s only one) in one of four directions. They also declare a House they will capture. The Varys card must be moved to the furthest character in that direction that matches the House name. Once the player completes that, they take any characters of the declared House they have passed over and also the character they landed on.

If a player captured the last Character card of a particular house, they activate one of the Companion cards’ abilities. This Companion card is usually discarded afterwards. If a player has acquired more or the same number of Character cards of a particular house than any other player, they take a House ownership token. The player with the most House ownership tokens at the end of the game wins.

A Game of Thrones: Hand of the King is a filler game, and it plays like one. However, few other games provide as much depth in the amount of play time indicated. Early turns can be slow, but as the game proceeds, there are fewer and fewer moves. As such, the end game arrives just as players are mastering their scheming. This can quickly lead to a second play.

The majority of decisions in the game feel like Chess moves, with players making assumptions about what their opponents would do should a certain move be made. In the early game, staking a claim on a certain House based on the number of House cards in a row or column is critical. The twist is the position you leave for the next player, who might also gain something. Balancing these two can quickly lead to early-onset analysis paralysis.

This is where A Game of Thrones: Hand of the King excels. The first few moves and then the mid game is where the play shines. Driving opponents to certain choices while preserving your own House dominance is key, but the game never feels heavy. It flows quickly and is just enough for a few minutes of gaming before a day of Machiavellian scheming.

But this also leads to the main weak spot. The end game, like some games of Chess, has a pre-decided end. Once the Varys card gets into a certain position, players don’t have any choices because the most obvious, optimal move is clear. Thankfully, this quickly hastens the end of the game, and, as a flaw, the game mitigates this itself.

If you’d like to get a copy of A Game of Thrones: Hand of the King, you can pick it up for about $12.

Final Score: 4 Stars – With a perfect play time and uncomplicated rules, enjoyable and thematic strategy stay engaging even if the end game plays itself.