We review 8Bit Attack, a cooperative dice game published by Petersen Games. 8bit Attack is a dice game that merges many Petersen Games universes into a fun 8Bit battle for the fate of the world. 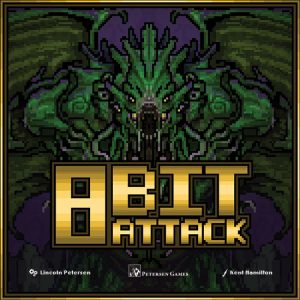 It had to be about 5 years ago now when my daughter was into Minecraft. I really didn’t get why she was so into this game with throwback pixel graphics. Then I played with her and understood. This game was the first sandbox game she had ever played, and since kids are constantly told what to do, this game gave her freedom to make her own choices. So, I wrongly judged the game on appearance and until I saw it in action.

This brings us to today’s review 8Bit Attack from Petersen Games. This cooperative dice game has players selecting heroes and battling enemies, all leading up to a final boss battle. Every character is pulled from multiple Petersen Games universes and all are rendered in 8Bit glory. It might look and seem simple right? Well, read on to find out why it’s not.

8Bit Attack is a cooperative, dice game for 1-5 players which plays in about 60-90 minutes and is best with 3-4 players.

8Bit Attack is made up of 5 enemy decks: Alien, Cultist, Demon, Myth, and Champion; and each is shuffled for set-up. The base game comes with 1 final lord, Cthulhu, but expansions will add more so you may need to select which will be the final boss to battle. Players then select a hero to control from 20 different heroes.

8Bit Attack is played over up to 5 rounds, with each round played in the following order:

1. Choose assault & draw enemy cards: players decide the assault level (1-7) with 1 being the easiest and 7 being the most challenging. Each assault level will have players draw 1 champion, with the assault card determining the champions HP as well as how many minions and allied enemies are also drawn for that assault.
Final Lord battle note: on turn 5 the players will not choose an assault level and must instead battle Cthulhu.

3. Assign Heroes: Each hero is paired up with enemies. This is to determine which enemy is attacking which hero. Heroes can target any enemy, not just the one assigned.

4. Battle: a) Roll the enemy tactics die- this determines which enemy special powers activate this round; b) Heroes attack by rolling their combat dice, spending energy, and using special powers to damage and debuff enemies and buff fellow heroes. c) surviving enemies attack – each card has set attacks that will damage and debuff assigned heroes and possibly buff other enemies.

5. Battle End Check: If at least one hero and enemy are left, repeat step 4. If all heroes were killed jump to step 7.

6. Loot: Each assault level successfully completed will grant the heroes 1 medal as a reward. So, Level 1 = 1 medal, Level 2 = 2, and so on. Heroes can spend 2 medals to ascend their hero (they gain a new power, a trait and a 3rd combat die), spend 1 medal to gain a rune, or spend 1 medal to gain potions.

7. Advance the game round.

End game: You win if you defeat Cthulhu and his allies and lose if you don’t defeat him by the end of round 5.

I didn’t know much about 8Bit Attack before reading the rulebook, but I had a blast as soon as it hit the table. I think what I like the most is that there’s an excellent balance of risk and reward when players determine their Assault Level. The group is in total control of what level to choose, but do you bite off too little, too much, or just enough to advance your heroes—which is the goal. You must advance your heroes otherwise Cthulhu and his crew will beat you senseless when you fight him.

I was also rather surprised how thinky 8Bit Attack is. You really need to plan and discuss the heroes’ attacks to minimize enemy damage, maximize hero damage, and change strategy as heroes or enemies drop. If your strategy is every hero for themselves or “1, 2, 3, get’em”, then I hope you enjoy losing. You need to coordinate and work together—which is essentially what you should be doing in a co-op game.

I love crossovers of all kinds so the fact that 8Bit Attack uses enemies and heroes from multiple universes of PG’s gaming catalog was a big hit for me. Aliens are pulled from Hyperspace and Startropolis, Cultist from Cthulhu Wars and Evil High Priest, Demons from Planet Apocalypse, and Myth from The Gods War. It was fun to see these in action, and just flipping through the different decks to see what was available to play or battle was cool.

My biggest complaint is that there’s a ton of iconography to learn with this game but there’s no comprehensive player aid. There’s a small one on the back of the game sequence card and another on the back of the rulebook, but neither lists all the icons that appear on the hero or enemy cards. We continually had to reference the rulebook which slowed the game at times, but after a few plays we knew most to keep the game moving.

A more frustrating issue with 8Bit Attack is that most of the Striker hero options seem very reliant on critical hits for their special attack powers. By nature, a Striker is the damage dealer of the group and being that the battle dice are 6-sided and only have 1 side for critical hits makes your chances for rolling one…not great. So, playing a Striker can be frustrating when the rolls don’t go your way, you must be prepared to gather energy for future rounds or annoy the enemy with weaker slow and fast attacks in the meantime.

I hope players will not judge 8Bit Attack the pixel graphics and see that it’s a unique co-op where players control their fate by choosing their own Assault Level. Plus, I think most players will be pleased and surprised with how thinky the game is. Also be aware that true cooperation is key for success with 8Bit Attack. Lastly, any crossover fans should love all the appearances of characters from the multiple PG universes gathered under one title.

Some might become frustrated with a lack of a comprehensive player aid for all the iconography you need to learn, but after a few plays that should lessen. Striker heroes beware that your attack powers mainly key off of critical hits on the battle dice and with a 1 in 6 chance you will need to have a plan B and even C when your dice don’t go your way.

Final Score: 4.0 Stars – A thinky co-op, dice game that merges many Petersen Games universes into a fun 8Bit battle for the fate of the world.