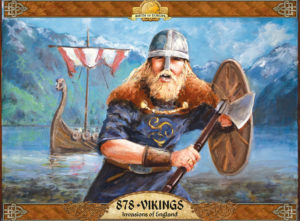 Readers looking for a quick voice response to the question “When did the Vikings invade England?” should NOT try to dial the number 878-845-4647 (878-VIKINGS). There’s just a busy signal. Probably the lines are clogged with many others desperately trying to get this information. To save readers the trouble, this review will encompass a game with the title 878: Vikings. That happens to be the answer to the above question.

If you’ve made it this far in the review, congratulations. 878: Vikings is a historical area control game representing the years after 878 AD in the northeastern coast of England. The communities there were violently disrupted by the arrival of this new culture and military force. This concept of a large sizable invasion and recreating this through a game brings a fascinating opportunity for some good play.

If players have a group of four, that’s the best way to play 878: Vikings as each player will individually get a faction to play. With less than four, the game plays the same, but some fun negotiating and team moments will be lost.

The game begins with the English faction player(s) setting up the unsuspecting forces of England by placing plastic army figures throughout the map. Cities and towns have garrisons of units, but much of the countryside shires are barren of military force. The Viking player(s) will populate their first army led by the leader(s) represented through cards. Units are placed directly on the card if they are part of the leader’s army.

During each round of the game, the turn order is selected randomly by drawing colored cubes from a bag. The colors Black and Red are for the Viking Norsemen and Berzerkers, while Blue and Green for the English Housecarl and Thegn respectively. However, players cannot plan ahead as they might for other games. A turn order cube is drawn only at the beginning of the round and after every player takes a turn. This creates a sense of tension as to what order play can happen and potentially devastate plans.

In general, the Viking players are directing armies led by leaders throughout a campaign of English terror on the map while the English players are trying to muster troops into sizable defense forces to take on the dreaded horde. Once a player’s turn begins, they proceed through five simple phases:

1. Reinforcements: The player gains new units and recovers units that have fled. At the end of the phase, the player chooses a Movement Card from their hand to play.
2. Leader Phase: Leader armies move and battle.
3. Movement Phase: Normal units move.
4. Battle Phase: Battles resulting from Phase 3 movement are resolved.
5. Draw Phase: A player draws back up to three cards in hand.

Cards in a player’s hand could also be event cards, which provide significant bonuses and additional tactics. The movement card played determines how many of a player’s armies can move and how far they can move.

In a battle, there comes a further asymmetric nature to play. The custom dice for the game give the Vikings (on average) one more hit result than the English. This represents the brutal nature of the warriors from Northern Europe. English units also have a higher chance to flee the battle. The one saving grace for the English are the Fyrd. The Fyrd is the word (Don’t you know about the Fyrd?) for English peasant units. They have the worst potential in battle and often flee or soak up Viking hits before doing damage.

Mid to lightweight war games with a strong historical theme are not common. Wargamers tend to love the granular details of battle. The pleasurable nature of just sitting down to play is incidental to the grueling experience most war games offer. 878: Vikings is different. There’s history if you want some, but overall it’s an exceptional four-player team on team war game.

That previous comment bears a second read because it’s only with three or four players that gamers will get what’s really being offered. The chance for multiple players collaborating between factions creates really interesting decision moments and lots of grand strategies.

In addition, the asymmetry is wonderfully implemented. After a couple of battles, if the English player is not channeling Monty Python’s Holy Grail “Run Away!” with every English die roll, something is wrong. The victory conditions also determine that each side really focuses exactly on what it needs: Vikings shutting down reinforcements of English towns and the English mustering a successful counterattack.

If there are complaints, it would be concerning the variable turn order and replay value. The nature of the turn order could be that, in rare occasions, the Vikings or English get four turns in a row. Replay value also is limited in that unless players move on to the advanced game, there’s little to change the experience from game to game. Being a historically focused game, this is not surprising, but with each play, changing sides from Viking to English is the best recommendation.

It’s not often that historical war games can grab the attention of a wider audience. 878: Vikings would be the game to do it. The rules are not heavy and the experience as a whole is thoroughly enjoyable due primarily to the asymmetry. Players who don’t know if war games are for them will be rewarded with 878: Vikings, if for any reason, just to see what a really well-done dice rolling combat game is like.

Final Score: 4 Stars – Historical accuracy only enhances the fun whether players are defending England or raiding its northeast coast.