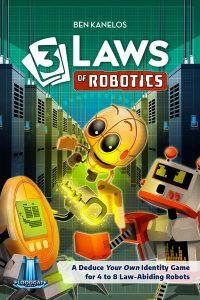 Isaac Asimov penned a series of short stories later to become collected anthologies involving the “what if” questions humanity is likely to have once robots become more than just automatons. When combined with artificial intelligence and a human appearance, robots transcend their intended function and could possibly take a different role in society altogether.

However, to distill such intriguing questions into cardboard components is not the intent of the game to be reviewed today. Floodgate Games’ production of 3 Laws of Robotics (3 Laws) is an activity more for intelligent apes who want to act as machines. It’s a hidden information and social deduction party game for 4-8 players that takes about 30 minutes to play. It plays best with as many as you can get.

Each player in 3 Laws of Robotics is dealt a role card to start. This card is hidden from the player but revealed to the other players once the game begins. Players keep these cards presented like a hand card, but the relevant information showing what team the player belongs to is only shown outward. The card also has a number on it (also shown outward) showing what “rank” or how important that card’s owner is.

During play, each player goes round the table asking a single question of one other person at the table. For each player, the goal is to discover what team their own card shows as well as how their rank compares to any teammates at the table.

After everyone has a chance to ask a question, players go round trading key cards to guess which team member of their own team has the highest rank. Once this is done, all role cards are revealed and the team which successfully gives their cards to the teammate with the highest rank scores points. There are also points for other qualifications so that at the end of the game, a single player will have a higher score than others.

A single round of play isn’t the end of the game. Play continues as above for 3 more rounds with each successive round introducing a “Law” card. This card gives instructions to the players about what they may or may not do at the table. If a player catches another player breaking a law, they can score points or make their opponent lose points. At the end, the play area should have 3 Law cards showing, thereby fulfilling the name of the game.

The gameplay here is of three minds. One part of this is similar to Spyfall with players trying to ask interesting questions without giving away information. Another part is similar to Hanabi where players will want to ask questions to help teammates receive information. Finally, another part is slapstick style Simon-Says with each player trying to remember the often “whimsical” instructions of the Law cards. In this reviewer’s mind, the mixture is a mess.

3 Laws doesn’t settle into the high drama of The Resistance, nor does it foster hilarious moments as might be had in a “so bad it’s good” game of Spyfall. Just when players think they know what to do, the game introduces sometimes ludicrous instructions that with the right group might, maybe, possibly be funny. That’s the rub for the person who brings it to game night. Know thy audience well beforehand.

The other element that detracts from the enjoyment is the large mixture of laws that can easily confuse players. Play can get bogged down just trying to understand when to enforce a Law card and whether the law was broken or not. This speed bump in play stops the flow and creates confusion where fun would normally be.

Finally, the main thing that 3 Laws seems to not get right is the formula for social deduction. Unlike Spyfall where players can draw on their own experiences from the location presented or Werewolf with players reading the conversation and “tells” of players, 3 Laws grants only a single question. This certainly can heighten the drama, but after not too long the formula gets stale. What could be an interesting ride through questions about robotic motivations turns into just another social deduction scenario with a contrived setup.

Overall, 3 Laws of Robotics is good for a play or two and there are lots of Laws included for a good mixture of moments. Unfortunately, with narrow audience entertainment value and moments which forcefully introduce humor into a social deduction formula, the game asks players to bring most of the entertainment. As such, 3 Laws of Robotics should only be recommended to hardcore social deduction fans looking for a new twist or those who do not take anything too seriously.

Final Score: 2.5 Stars – Well produced and with opportunities for interesting deducing, 3 Laws ultimately get bogged down in repetition and asking too much at once from players.

Hits:
• A lot of Laws to play with
• Complexity (if players like that)

Misses:
• Rules requiring players to act or forcibly be funny
• Play style can get old quick
• Not as much social deduction as a party game