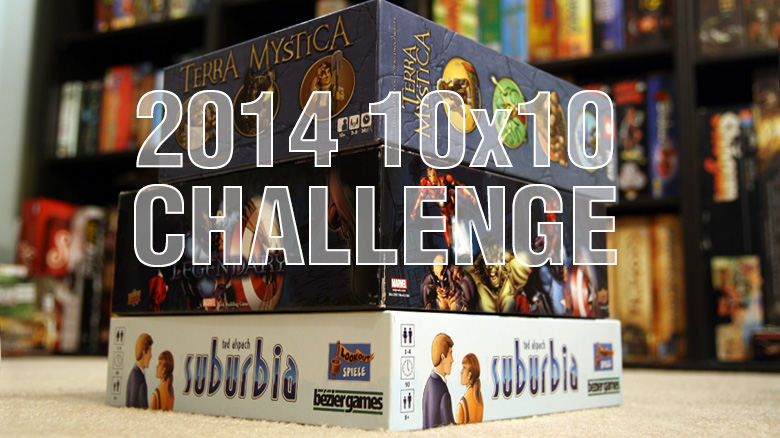 Shortly after Christmas, my wife Sarah stared at the pile of new games our family had amassed and sighed unhappily. She then asked me “When will we have time to learn and play these games when we already have a backlog of games that we haven’t played? I am tired of learning new games, only to forget about them after playing them once or twice just to learn another new game.”

As I was perusing BGG for an updated FAQ for Nations, I came across the following Geeklist. I stopped. I reread the premise of the Geeklist, and then stopped again. “What is it?” asked Sarah. An idea that I had honestly not considered crossed my mind and I consulted with the ultimate decision maker.

“Hey, sweetie, look at this Geeklist. Do you think we could do this? Play 10 different games 10 times during the year?” Sarah stared at me, and then glanced back at the cache of unopened Christmas games.

“What about those?” she inquired.

“We can include some of them, if you want. Do you think you could commit to playing 100 games with me in 2014?” I countered and smiled at her. She did not smile back.

“100 games? That seems like a lot.” I explained that I agreed with her about being tired of playing a game only once or twice, and how this would be a good opportunity for us to really learn the strategies of a game by playing it at least ten times. This was a feat we previously completed only with the games Dominion, Kingdom Builder, Race for the Galaxy, Magic: the Gathering and Battle Line. And further still, only because we have been playing games together for over four years.

Spoiler Alert: She agreed to take on this challenge with me. Or else I would not be writing this.

To decide which games would make the cut, we decided to review our collection together and write down the games we wanted to include in the challenge. After our first pass, we had an initial list of 23 games. Sarah made me a copy of the list, took the original, and then we retreated to opposite corners of the game room to select the 10 games we wanted.

We reconvened at our game table and agreed that any game we both selected would automatically be included in the final list. And so the parlay began.

Me: Seriously? No, I did not pick that. My first selection is Lord of the Rings LCG.

Sarah: Really? You know I hate building decks. How about Kingdom Builder?

Me: We have already played that 10 times. Summoner Wars?

Me: War of the Ring, Second Edition?

Our negotiations continued for several minutes, after which we managed to only agree on 3 games from our original list of 23.

• Legendary + Dark City + Fantastic Four – This was one (technically three) of Sarah’s new Christmas games. Sarah was really looking forward to trying them, especially after she remembered the game existed when she witnessed my brother open this up as his Christmas gift.
• Lords of Waterdeep + Scoundrels of Skullport – We both love this game. We have probably almost played this ten times already, but we have only played with the expansion twice. And I would rather play this than Stone Age.
• Nations – This was another one of our new Christmas games. We really liked Through the Ages, but it lasted too long for our tastes. Hopefully we will enjoy this game more.

To round out the list, we decided I would pick five games and she would pick two. Sarah allowed me the extra games because she was very happy to have had both Legendary and Lords of Waterdeep make the challenge. The remaining games that we included were:

• Caverna – I included this because I am determined to get my money’s worth out of this game…stupid Mayfair online pricing policy.
• Terra Mystica – Ditto…stupid law of supply and demand.
• Lord of the Rings LCG – I have almost ALL of the expansions, and have only played this four times. Because this is a co-op, I can build the deck for Sarah and she loves the Lord of the Rings universe.
• Suburbia + Suburbia Inc – I love this game but Sarah doesn’t. She has 10 times to change her mind now.
• Sentinels of the Multiverse + all expansions – I like this game a lot and want to play it more.
• The Castles of Burgundy – one of Sarah’s favorite games. She loves dice games, even though they hate her.
• Goa – another Sarah favorite. She has never been able to explain why. She usually does not like auction games, but for some reason she loves this game.

Games that ALMOST made the list, but did not make the cut (note: if one of our games falls out of favor, we are allowed one substitution, per the Geeklist rules. The replacement game would come from this list):
• Robinson Crusoe
• Village
• Troyes
• Bruges
• Bora Bora
• Core Worlds
• Summoner Wars

The purpose of this series of articles will be to track how well my wife and I progress through this challenge as well as to discuss how a game changes after multiple plays. We will provide a monthly summary of what games we managed to play, if playing the same game multiple times changed our opinion of the game in any way, and what impacts multiple plays had on both our understanding of the game, as well as our underlying strategies we use in the game.

Finally, I hope this challenge helps me appreciate the many games that I do own, instead of forgetting about them while I try to buy the next “It’s like Dominion, BUT…”

We will update our progress every month in this article series so be sure to check back and see how we are doing!