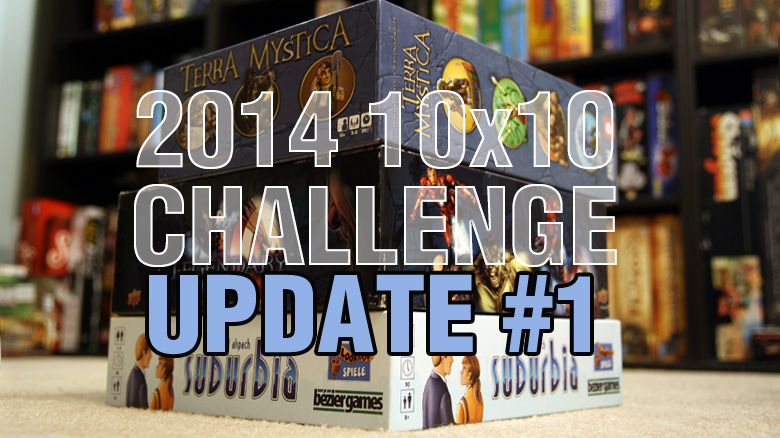 Hello readers! Sorry for the delay in the update. And sorry I was late in responding to your comment Brian! January started off SO well with 7 games played by mid-January. Sarah and I thought this challenge was going to be easy…

Then real life interrupted our progress. The Super Bowl. Incredible amounts of record setting snow fell where we live. A flu bug swept through the house. Valentine’s Day (Weekend) had to be celebrated. There were three birthdays in our immediate family. And 2…yes, 2 games we were able to be play since mid-January. Sarah and I have some serious catching up to do…

What has disappointed us (me) since the last article?

Sarah loves The Lord of the Rings, and she loves Magic: the Gathering, but only if it’s a pre-built deck because Sarah loathes deck building. Sarah’s game time, like most people’s game time, is limited because she has these responsibilities known as “mommy” and “dean” and “cook” and “wife.” So, understandably, she would rather play a game than spend her time reading cards just to build a deck in order to play that game. On the other hand, since all I have to do after work is nap, eat bon-bons and play games, I have plenty of time to deck build for both of us.

(Note: I am grossly underselling my sheer number of responsibilities in our household. For example, I take out the garbage on Thursdays.)

So, given how much time I have to review the cards, read LotR: TCG deckbuilding strategy articles on BGG, and establish tiers for card efficiency vs. cost, how many game breaking, Sauron destroying (or at least Gollum finding) winning decks have I built for us so far?

Every time I pull out the cards, neatly sorted first by sphere (think different colors in Magic), then by expansion, I get intimidated by the sheer number of cards I have amassed, get the shakes, put the cards back, and pull out a simpler game like Legendary (review here).

This brings me to the positive points since the last article.

I thought I was including Legendary in the list to make Sarah happy. I have been more than pleasantly surprised by this game. In fact, it has quickly risen to be one of my favorite deck building games. Outside of the weak attempt at turning the game into a competitive coop, I cannot think of anything else that detracts from the game.

I like Legendary’s replay value, especially from the random set up at the beginning of the game. Similar to Dominion or Thunderstone, the game is set up by randomly selecting the heroes you will be able to use, the mastermind (the evil “boss”) you will face off against in the game, and the mastermind’s army o’ thugs. But Legendary takes it one step further by including a scheme card, which is also randomly drawn, that represents how evil can win the game. There is no evil to beat in Dominion (although that guy on your right who keeps giving you Curse cards sure seems to embody evil), and Thunderstone does not have a unique way that changes how the denizens of the dungeon can win each game. This leads to the potential of the same scheme being pursued by different masterminds, making what might have been a walk in the park in one game a more difficult task in another. For example, compare Red Skull as mastermind (the Glass Joe of masterminds in Legendary) to when Loki is the head honcho.

This is the perfect game for the 2014 10 x 10 Challenge because, although we will be playing the same game 10 times, it can change dramatically depending on which heroes are available to use as well as which mastermind/thug/scheme combo you will face off against.

Note: If you are looking for a quick way to select the cards you will use in the game, I highly recommend the Legendary Randomizer app (it is on iTunes). I use it to help start my card set up process.

We like Agricola. But when you play a game roughly six times in a year, the processing of the 14 cards you get at the start of the game can be a bit daunting. In addition, there is the constant pressure during the game of trying to feed your family while trying to score the most points while watching what your “neighbor” is doing to make sure they do not steal your spot. And while baby is crying because it hasn’t been fed in three harvests, and you have 3/4ths a fence built so you still are living with that stupid sheep…wait…seriously, did he just take all of the food when his house is literally made of food…GHAAAAAAA!!!!!!!

You know what we like more than Agricola? Agricola: All Creatures Big and Small. It removes the need to feed, but still creates that pressure of wanting to get all of your actions accomplished while preventing your opponent from doing the same. As a bonus, for time-strapped gamers the game plays in about 30 minutes. Please realize that I am playing this game with Sarah. She can take four minutes to play A Minute to Win It!, so most of our readers will realistically finish in 25 minutes or less.

So what would you have if Agricola and Agricola: All Creatures Big and Small (A:ACBaS) had an (somewhat) incestuous love child?

Caverna and Agricola offer a similar expansion of available worker placement options as the game progresses. Alternately, Caverna reduces the concern for feeding your family (you can convert almost every resource to food at any time) and removes the 14 card opening hand. Another benefit of not having 14 cards at the start of the game is that you are not potentially pigeon-holed by the cards you are dealt. Everyone has the same options at the start of a game of Caverna. If you love dealing with the cards in Agricola, you may not appreciate Caverna as much.

Caverna uses buildings in place of the 14 cards, similar to A:ACBaS; however, unlike A:ACBaS, all of the buildings are used in Caverna. That is correct. At the start of a full game (i.e. not the introductory game, which is similar to Agricola’s family game in terms of being used as a stepping stone to the full game), no buildings are randomly selected to be used for the game. All 48 unique buildings are available to be built.

I do not want to turn this into a full-fledged Caverna review, but I will say that Sarah and I both love Caverna. (Publisher’s note: Caverna review coming soon).

Nations is turning Sarah into a “real” gamer

Sarah likes multiplayer solitaire. Sarah does not like me looking at her playing area to analyze what she has and what she needs. Her theory is I should play my game and accomplish what I want while she does the same, and whoever has the most points at the end wins.

I do not subscribe to that theory. So I was hesitant to play this as a 2 player game with Sarah because Nations is a brutal 2 player game. If you tie for positive effects during the Events phase, no one receives the benefits, but if you are tied for negative effects, you both are punished. It can be very “take that” and cutthroat.

In our first game, Sarah had a larger military than I did. A war card was added to the purchase board, but she did not buy it and purchased a building upgrade instead (higher military goes 1st). So I bought it. She looked at me like I was the guy on the cover of Caylus.

“You don’t even HAVE a military,” she correctly stated.

“Yes, but whoever buys a War card sets the military level required to not be adversely affected by war…so for this round the military requirement is zero,” I replied.

No more words were shared between us for one Age (approximately a half hour).

In our next game, I caught her looking at my player board and my superior military. She smiled and bought the war card.

There is hope for my young Padawan yet…

That’s about it for this month’s update. I hope to have some Lord of the Rings games under my belt by the time you read the next article. If you have any questions or comments, please feel free to leave them below. Take care! And make sure you look at your opponents’ boards and mess with their plans. It really is the best way to game! 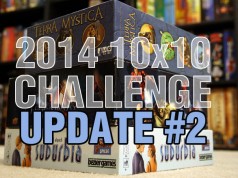