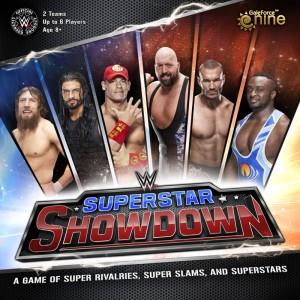 There is no sport that better demonstrates the triumph of man over adversity than professional wrestling…Ok, maybe not. Love it or hate it, there is no denying the popularity of WWE Wrestling. From the late Randy “Macho Man” Savage to John Cena, the WWE has been a juggernaut on TV for decades.

And while it remains a force on cable, WWE Wrestling has never really worked its way to our tabletops. Until now that is. The wizards of licensed games, Gale Force 9, have brought us WWE Superstar Showdown. Does the sport(?) of wrestling make for a good tabletop game? Time to find out!

In WWE Superstar Showdown, players control one to three wrestlers (depending on the match rules) on either the red team or the blue team. Each match will consist of a number of quick playing rounds where cards are played to the game board in an action programming type of system. As the cards are revealed, a rock-paper-scissors type mechanic decides who gets to activate their wrestler that turn.

When you activate your wrestler, you will be moving around the ring to attack your opponent and perform other wrestling type moves (yes, you can fly off the top turn buckle or throw someone into the ropes).

As you deal damage to your opponent, they will lose cards from their deck. As the rounds progress and damage is dealt out, players will give up more and more cards to their opponent. You win by either pinning your opponent or knocking them out by depleting their deck.

WWE Superstar Showdown comes with 6 different wrestlers for the players to control. Much to my disappointment, there are no legends of wrestling included; the 6 characters are all from current WWE Stardom. However I’m guessing this was a conscious choice to make the game appeal more to current WWE fans.

Each wrestler gets a miniature, a deck of tactics cards (complete with photos of the wrestler in action), and a set of upgrade cards. The wrestler decks are somewhat similar, however they also appear to be somewhat tailored to their wrestler’s skill sets (based on the icons on the cards).

The game also has a large board that depicts the wrestling ring and a spot to house the three action cards each player will play in a round. Other than that, there are just a few match cards where players can alter the rules of each contest.

WWE Superstar Showdown is really easy to start playing. Each player chooses a wrestler and takes his corresponding deck. The match rules are then decided: Head-to-Head, Tag Team, Gauntlet, or Last Man Standing. If players want to get ever crazier, there are stipulation cards to further vary things up (endurance matches, falls count anywhere, hardcore match, etc.).

WWE Superstar Showdown is played over a series of rounds, each of which is divided into 4 parts.

1. Draw Cards: Each player draws up to a hand size of 6 cards.

2. Play Cards to the Board: There are 3 spaces for cards on your side of the board. You place one card facedown onto each of those spaces.

3. Compare Cards: Both players reveal the card they have in position 1 and compare their type. There are 5 types of cards: Slam, Grapple, Strike, Maneuver, and Block.

If there is a tie, players draw off the top of their deck until the tie is broken. The player who played the winning card now gets to resolve the icons on their card. The different types of actions are:

Move: Move around the ring, this includes bouncing off the ropes or exiting the ring
Attack: Every point of your attack value forces your opponent to give you cards to place in your performance pile.
Corner Attack: Move from a corner space and attack.
Setup: Buffs for future moves or attacks
Throw: Throw your opponent.
Stun: Play an extra card from your hand and resolve its icons
Reversal: Possibly turn a losing card into a winning one
Kickout: Only used in pins.

4. Pinning your Opponent: Which ever player won two out of the three cards this round can try and pin their opponent if they end the round adjacent to them.

To get out of a pin, your opponent must give you a card from their hand with the kickout icon. If they don’t have one, they draw cards from the top of their deck hoping to find one. They draw and give up cards one at a time, up to 3 cards (basically the 3 count in wrestling). If they find a kickout, the match continues. If they fail, the match is over and they lose.

Rounds continue in this manner until one player has pinned their opponent or knocked them out (when you can’t give up a card and you need to).

I must admit, I’m not a fan of WWE Wrestling. I haven’t watched it in ages. I’ve heard of John Cena only from random commercials and Randy Orton mostly from the hilarious RKO Vines youtube.

I was, however, a massive fan of WWF Wrestling back when I was a kid. When the Macho Man, Andre the Giant, The Ultimate Warrior and <He who must not be named> where fighting in the “squared circle”, I was glued to the TV.

So with fond memories of Jake the Snake Roberts and Rowdy Roddie Piper dancing around my head, I decided to give WWE Superstar Showdown a shot even though I had no idea who any of these wrestlers were. Because frankly, if any company can make a licensed game awesome, it’s Gale Force 9.

And you know what? They absolutely captured the spirit of professional wrestling with this game. I don’t know how those crazy designers keep succeeding with the most unlikely of licenses, but they always seem to surprise me.

It didn’t take long for us to really get into the experience of the game. We started narrating what moves we were doing, and when it came time to pin someone, we yelled out the 3 count like some over-the-top announcer.

One of our games, in true WWE fashion, had my wrestler down to his last handful of cards. I was pinned the previous round, but managed to draw a kickoff on the count of 2. I thought I was beat. However next round I was able to pull off a reversal and pin my opponent. He didn’t have a kickout in hand and after a 1-2-3 count, I pulled off the win.

It’s moments like this that are so evocative of WWE Wrestling. Those clearly acted up times where a wrestler works the crowd, goes from wining to losing to wining again that clearly defined an era of entertainment from my child hood.

The mechanics themselves are really nothing ground breaking, but I feel like they work really well for this game. The game play needs to be simple and quick playing. You don’t want rounds bogged down with analysis paralysis. You want them to flow quickly from one move to the next. And on that front, WWE Superstar Showdown absolutely succeeds. Pro wrestling has always had that kind of ebb and flow to their matches that was expertly captured here.

When it comes to strategy, sometimes I will try and second guess what my opponent will play, other times I choose the cards that I want to try and activate. However, at times I will also just choose some random cards and see what happens. That is, of course, except for my slam cards.

Each wrestler has 3 slam cards usually these represent the wrestler’s signature move, such as the aforementioned Randy Orton’s RKO. Slam is the trump card in this game and it’s almost painful when one is given up to your opponent. But as long as you have them in your deck, know you are still in the game.

The Head-to-Head match is probably the default that most people will do. But I found that the Tag Team match to be quite a bit of fun as well. It gives you more of a reason to move around the ring (something that is a bit lacking in head-to-head). You can even use your team mate to cheat and do extra damage in true WWE Fashion. Unfortunately the game does not have rules for hitting your opponent with a steel chair.

One thing I think Gale Force 9 really needs to do with WWE Superstar Showdown is quickly get out some expansions packs with the legends of wresting. I absolutely get putting out the current wrestlers first; people who love wrestling will be your bread and butter. But for someone like me who wants a bit of nostalgia, I’d pick that up in a second.

I should really stop being surprised when Gale Force 9 kills it with a licensed game. From Firefly to Homeland to Sons of Anarchy, they have absolutely proven that they know what they are doing. WWE Superstar Showdown ended up being a fun romp through professional wrestler that I quite unexpectedly enjoyed.

While yes, the mechanics are simple and random at times, I feel like the fit the game perfectly considering its theme. If you are looking for a strategic game where you have a lot of control, you are going to be disappointed. But if you are looking for a game that captures the essence of WWE Wrestling, than look no further.

That the other thing to think about with WWE Superstar Showdown. The theme absolutely makes this game. I feel like pro wrestling doesn’t have a lot of middle ground. Either you love it or you hate it. If you are someone that thinks wrestling is the dumbest thing on the planet, than this game will not be for you.

However, if you are like me, and have fond memories of WWF from your childhood, or you are a current fan of John Cena, Roman Reigns and the other superstars, then WWE Superstar Showdown is absolutely worth checking out. It offers a highly entertaining and thematic experience that I would never have expected from a licensed game.

Even though I’m not a current wrestling fan, I’ll be keeping WWE Superstar Showdown in my collection and looking forward to the day I can play some of the legends from the past.

If you’d like to pick up a copy of WWE Superstar Showdown, you can get it for about $40.

Final Score: 4 Stars – While the mechanics aren’t ground breaking, the game perfectly captures the spirit and essence of professional wrestling.

Misses:
• No legends of wrestling
• Game can be somewhat random at times