Home Game Reviews Via Nebula Review
Review of: Via Nebula

We review Via Nebula, the new route building game from designer Martain Wallace and publisher Space Cowboys. In this easy to learn game, players are trying to construct buildings in the Nebula Valley.

It’s a time of hope for the people. The Nebula Valley has just emerged from a Dark Era where monsters roamed the mists, causing all kinds of chaos. It’s now time to rebuild. The explorers of the valley must cut a path through the mists to harvest resources and construct new buildings.

This is the theme behind Via Nebula, a new euro game from acclaimed designer Martin Wallace (Brass, Steam) and publisher Space Cowboys (Splendor, TIME Stories). Via Nebula features some great artwork and components, and is the first team-up between Martin Wallce for Space Cowboys. Was this a match made in heaven? It’s time to find out.

Via Nebula is a route building and pick-up and deliver game for 2-4 players that takes about 45 minutes to play. Via Nebula plays well with all player counts, but best with 3-4 players.

During the course of the game, the players’ main goal is to construct their 5 buildings. To do so, the must not only harvest resources from the game board, but also create paths to bring them to their building sites. When a player constructs a building, they will earn both victory points and also gain an immediate power they can use.

Once a player has built their fifth building, the game ends and the player with the most victory points is the winner. 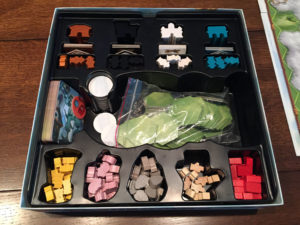 As I’ve come to expect from a title produced by Space Cowboys, the game not only looks beautiful, but contains very high quality components. And in what appears to be a tradition with their games, Via Nebula also comes with a custom insert. For the most part, the insert works pretty decently. The only issue I’ve found is that the building slots can be a bit too snug for the pieces, but other than that, it holds all the components nicely.

The game board is illustrated with a hexagonal grid and is dual sided. One side is for easier play, while the other contains extra barriers for experienced gamers looking for more of a challenge.

Via Nebula also comes with a number of wooden components, each custom shaped to represent a building, craftsmen, or resource type (there are 5 resources in the game).

Each player gets a player mat that will not only act as a player aid, but also house all the player’s components. I love when a player mat holds components in specific slots. It aids in teaching the game and keeps things organized. Overall I was very happy with the production quality of Via Nebula and have very little to complain about.

Once the game is setup and each player has their components, you are ready to begin. The first player will begin the game, and play continues clockwise from them.

On a player’s turn, they must carry out 2 actions:

Turns will go by in that manner until one player constructs their 5th building. After that happens, each other player gets one final turn. Points are then added up (with players losing a point for each resource in their storage area) and the player with the most points is the winner. 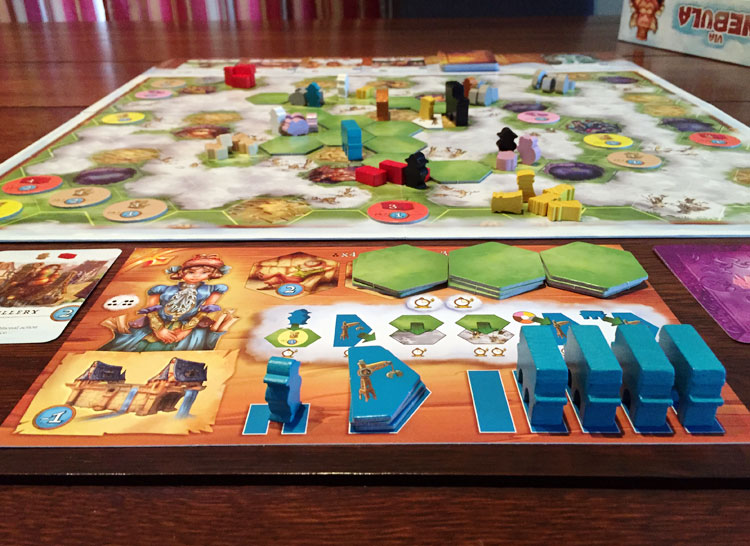 Space Cowboys has been constantly producing high quality and innovative games, so each new release from them gets my attention. And I’d say that the trend continues with Via Nebula.

The first thing I noticed about Via Nebula was just how accessible it is. Once the game is setup, rules explanation goes by very quickly. There are 6 actions to take in the game and none of them are very complex. This makes getting the game up and running fairly easy.

There is almost a simple elegance to the game that reminds me a bit of Kingdom Builder. The game is easy to teach and play, yet under that skin lays a nice amount of depth. I love games that I don’t have to spend 20 minutes teaching the rules, yet can still keep me entertained for the entire length of its play.

One of the reasons Via Nebula achieves this is due to the high level of player interaction in the game. Almost everything you do in the game is going to affect other players in some way.

For example, when you play a craftsman, you not only open up that resource spot for your buildings, but for every player’s buildings. The same goes for when you clear a meadow space. I find myself thinking not only how that new pathway will benefit me, but also if it will benefit my opponent. It’s almost like we are playing a cooperative game, in that we are all doing actions that benefit each other, even if unintentionally.

Yet the cooperation ends there because Via Nebula will definitely have you competing with your fellow players. Whether it’s for the last resource on an exploitation space, or one of the public build cards, you’ll have to keep a close eye on your opponents’ actions. Sometimes it will be clear which building card an opponent is going for and there is nothing more satisfying then snatching it out from them before they can build it.

If found that because of the simple mechanics, downtime in Via Nebula is very minimal. With only 2 actions to take on your turn, most of the time, rounds will fly by. Usually, every player has a plan and when it comes time to take their turn, they are ready to work. This makes even a 4 player game go by quickly.

When it comes to player scaling, I will say that Via Nebula definitely plays better at 3-4 players than with only two. While we played with two and still enjoyed it, it does lose a bit of that player interaction that makes the game so great.

For the most part, with only 2, players will just concentrate on doing their own thing. There is less competition for resources and rarely are buildings stolen out from under you. For me, I enjoyed the added interaction at the higher player counts.

Finally, Via Nebula also has a good amount of replay value. Not only is the board two sided, offering up a more challenging game for experienced players, but the resources are randomly placed each game. That means that you will have to re-plan out the best routes every time you play the game. 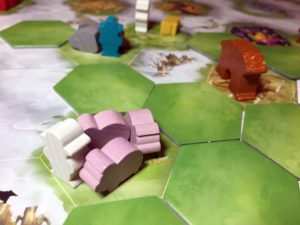 Space Cowboys has been doing a great job of designing games that are both unique, while still being quite accessible. And on that front, Via Nebula definitely fits the bill. The rules are easy to learn, the downtime is minimal, and the components are very well produced.

Via Nebula is easy enough to play that you can definitely introduce it to your non-gamer friends, yet there should also still be enough depth here for any gamer to enjoy. Other than the lower interaction with two players, I didn’t find very much to complain about with Via Nebula. It’s another great game from both Space cowboys and Martin Wallace. This one will be staying in my collection.

Final Score: 4 Stars – An easy to learn game that can still surprise you with its depth and high amount of player interaction.

Hits:
• Easy to learn rules
• Great components
• Many things a player does can affect other players
• Good replay value