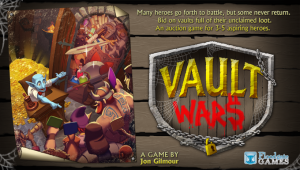 Yesterday we posted our review of Epic Resort by Floodgate Games. It’s a game about where heroes go on vacation when they need a break of the daily dungeon crawl grind. If you want to know more about it, you can read our full review here.

But today we are going to talk about Vault Wars, a new auction game coming to Kickstarter. What happens to a hero’s stuff when he goes to the Epic Resort and doesn’t come back? Well, unless his bills are all paid up, his vault will eventually get auctioned off. Lucky for you, you have to the coin to take advantage of that potential windfall. So let’s dive into Vault Wars and see if that’s something you’d like to back on Kickstarter.

Vault Wars is a set collection and auction game for 3-5 players that takes about 30 minutes to play. Vault Wars plays best with 5 players.

Vault Wars is played out over several rounds where each player will take turns auctioning off a secret vault. When a vault comes up for auction, players must decide how much the contents are worth to them. The trick is that players will only have a limited amount of information on what’s actually in the vault. So they must judge wisely or else they might end up paying their hard-earned coin for a box of junk. At the end of the game, whoever has the most victory points, wins.

Each player starts the game with 20 coins, 2 heroes, and a number of vault cards (determined by the player count).

Each round takes place over 4 phases:

Phase 1 – Prepare the Vaults: Each player secretly selects one of the vault cards in their hand to put up for auction this round. Once all have been chosen, they are simultaneously revealed.

Phase 2 – Auction: Each player takes a turn as the auction master and sells their vault. Each vault will have 3 numbers:
Items to draw: Draw this many item cards to be auctioned off in this vault. Only the auction master may look at them.
Items to reveal: Of the item cards drawn, reveal this many to all players.
Items to be peeked at: Of the remaining items not revealed, each player may randomly look at this many.

As soon as any other player increases the bid, the auction master may not take part in the auction anymore. Bids go around until everyone has passed. Whoever bid the highest, claims the items and pays the AUCTION MASTER the winning amount.

Note: Most vaults will have special rules that may alter the game in some way.

Phase 3 – Get Paid: Each player may sell up to 4 items and collect the listed amount from the bank. Junk items may just be discarded and don’t count towards the limit.
If a player is low on funds at this time, they can take 10 coins from the loan shark, but earn negative victory points each time they do this.

Phase 4 – End of Round: Some items my be equipped and when done and provide the player with a special ability that can be used. However, equipped items can never be sold and aren’t worth any victory points.

Each player must also pay a 1 coin to the bank as a storage fee for any item (excluding equipped items) they still have in their possession.

After this, the round ends a new one begins. Rounds continue in this manner until all players have auctioned off all of their vault cards. Players then total up their victory points from items in their item pile, bonuses from one of their hero characters, and remaining gold at a ratio of 10 gold for 1 victory point. Whoever has the most victory points wins.

I am usually a fan of auction games. I like bidding against other players as I try to put my strategic plans in place. The player interaction in an auction game is usually a lot of fun. So I was definitely intrigued by Vault Wars. I’m guessing it’s loosely based on the reality show Storage Wars, which I’ve only seen about once or twice. Not really my kind of show.

But dubious inspiration aside, Vault Wars is a pretty well designed game. One of my favorite parts of Vault Wars is the hidden information players have to deal with. Usually in auction games, you know exactly what you are bidding on. However, in Vault Wars, you only know a portion of what you are buying. This makes for some great interaction and tension during an auction.

Sometimes when I know I have a vault of junk, I like to set the starting bid high in hopes that the other players will think I’m trying to keep all this loot to myself. Of course this does bring in the risk that if they don’t buy it, I’ll be stuck overpaying for the items. So it’s obviously not a card you can always play. But if you like games that allow you to mess with people’s heads, then you’ll be a fan of Vault Wars.

One of the additions to the game that I didn’t talk about yet was the worker cards. These are an optional component to the game and I’m kind of glad they made them this way. While they were a neat idea, we really didn’t like using them. I felt like they added an unnecessary layer of complexity to the game and it felt more streamlined without them. It’s hard enough to juggle all the various vault, item and hero cards in your hand without adding a fourth into the mix.

When it comes to player scaling, Vault Wars follows the path of other auction games where more is better. I tried the game at the 3 player count and it felt a little lack luster. This is probably due to the fact that one player takes on the role of the auction master and can’t join in the bidding. Auction games are never that much fun when you only have 2 players going at it.

However, when you do have 4-5 players, Vault Wars can be a good amount of fun. There will be a lot of bidding, fighting, and head games to be played, especially when some of the better items are shown. I love watching other players reaction when they claim a vault. Usually you can tell right away if they made a good decision or a poor one. This is especially true because this is a set collection game, and sometimes when you score big on a hidden vault, it can make all the different in the game for you.

Finally, I think making the money a closed system (for the most part) was a great idea. I like how the auction winner pays the auction master. That is actually a double-sided sword though. If you bid high, you get what you want, but you are also making your opponent richer. The down side of that is that if you get a few crappy draws on your items and no one wants your vault, you will be visiting the loan shark quite often and can get really be behind in the game.

If you are a fan of auction games, then you need to check out Vault Wars. It puts a new spin onto a genre of game that I usually enjoy. I thought the that inclusion of hidden information was a great twist that can sometimes pay dividends… or come back to bite you in the butt.

Vault Wars ended up being a fun game with a lot of creative twists on auction genre. I think that the play time hits the sweet spot because had the game been any longer, it could have easily over stayed its welcome. As it is though, Vault Wars is a fun auction game that should be able to find room on your gaming shelf.

Vault Wars is Kickstarter now through Thursday, March 5th. You’ll be able to pick up a copy of the game with a $20 pledge including free shipping to the USA. Vault Wars is projected to be in backers hands in August of 2015, so head over today and check it out.