Home Game Reviews The Cohort Review
Review of: The Cohort

We review The Cohort, a new set collection game published by MAGE Company. In The Cohort there is a new twist on the set collection genre as players are trying to collect sets to get rid of bad penalties, rather than gain bonuses. 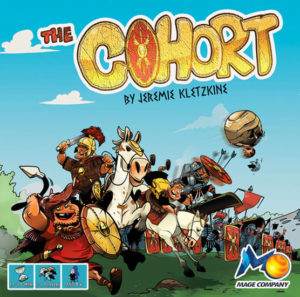 One thing that is consistent throughout set collection games is that as you complete sets you earn a reward. This may be victory points, cash, or another perk that gets you closer to victory. In The Cohort, your reward for completing a set of roman soldiers not only gets you closer to victory, but you no longer suffer the negative effect inflicted by that card. I was happy to see a new take on this mechanic, but I wasn’t sure how well it would work. Let’s get to the review to find out.

The Cohort is a set collection and hand management game for 2-6 players to play in about 30 minutes. In my experience, the game plays best with 4-6 players.

The starting player and every player following has three phases to their turn. They first take two cards from the shuffled deck, look at both of them, and give one to a player of their choice and keep the other.

The second phase is optional and allows players to take a card from their hand and place it face-up on the table to start or add to a Cohort. Once a player has played the required number of unit cards to complete the Cohort, the set is placed face down and the player no longer suffers the effect of that unit type. They also choose a player to discard all the cards from their hand. In the last phase, the player discards down to the maximum hand size of 4 if necessary.

Those are all the core rules. Where the game changes is when you place the first card of any unit card on the table. These can cause you to not receive a card from another player, reduce your hand size, pass out more cards, not look at the cards you draw, or play with your hand cards face up on the table. You are allowed to have as many Cohorts on the table, however this means you have to deal with all the effects.

When I brought the game out to play with two different groups, it garnered the same reaction at the start of the game. The group was surprised that with a set collection card game that you don’t start with any cards in your hand. I didn’t expect this reaction from the players and I think unexpected was the general consensus from people around the table for the game.

The major crux of the game is the negative effect each of the unit types inflicts on the player. This was such a breath of fresh air in set collection mechanics that I didn’t know I even needed. Turning the tables like this added a different layer to the strategy of the game. Rather than deciding which reward they would like the most, players are forced to think about which negative effect that they can deal with until they complete the set.

Players can compound this issue by trying to complete more than one set at a time. This allows you a greater chance of playing a card on your turn, however, if you are not careful, you can debilitate yourself to a point where it is counterproductive.

The negative effects are varied and seem well balanced. Some have very little effect on each turn, causing you to discard certain cards or draw off the discard pile. Others have much more harmful effects like forcing you to play with only two cards in your hand or not being able to accept cards from other players.

The game balances the severity of the effects well by making the most harmful effects reserved for the cards that require the least amount to complete the set. A good way to play is to wait until you have all the cards you need before venturing down these more crippling unit types.

While the game flips the script when it comes to some core set collection games, it can’t avoid one of the major ones. As you get close to the end of the game, players will just stop giving cards to the player in the lead. This causes the game to slow down a bit as players are just waiting for their turn to see if they get the right card. In addition, there is a mechanic after a player has completed a full unit set that they choose one player to discard their entire hand. This can really hurt if you are attempting to complete a rarer unit type.

The Cohort doesn’t allow luck to be the determining factor like in most card set collection games. Sure you do need a little to get the right cards into your hand, but the game mitigates luck by requiring players to pass at least one card to another player. If you are not seen as a threat, you will collect quite a few cards as you are waiting for your next turn. This does present you with more options as you play because you could collect enough of one unit type in just one round.

I was surprised with how much I enjoyed The Cohort. The set collection mechanic needed a fresh take and the game gives that in spades. Players have to decide which of the negative effects given by the cards they want to manage during the game. It’s a different strategy as you play when you are not looking at what to gain but how to find a way out of the mess you have created.

While The Cohort has some fresh ideas, it can’t avoid a few of the issues that games of this nature. A few rules and situations cause the game to last longer than it should. I would rather a shorter solid experience then one that takes longer. Even with these few issues, The Cohort is a solid game that I definitely recommend.

Final Score: 3.5 Stars – A fresh take on the set collection mechanic that leads to new strategies as you deal with the negative effects cards give.

Misses:
• Game takes slightly longer than it should
• Larger than necessary box