We review Terra Mystica for iOS. Publisher Digitdiced has brought Terra Mystica to our iPads and iPhones and we dive into the app and see how well they did at the digital translation. 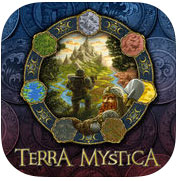 We are not even halfway through 2017 and we’ve already seen a number of board games make their way to our iPad. I think publishers are finally starting to realize that there is a major demand for solo gaming vs an AI.

Developer Digidiced is no stranger to making board games into digital apps. In fact, their translation of the Uwe Rosenberg game Patchwork won our 2016 Board Game Award for Best iOS Board Game. This year, they’ve brought us a new offering in the form of the heavy euro game Terra Mystica. Pulling off an app for as complex a game as Terra Mystica couldn’t have been easy, so let’s see how they did.

Terra Mystica is a territory building and economic game for 2-5 players. The main goal of the game is to expand out your unique civilization by changing the land into your race’s preferred terrain type. This is accomplished through a careful management of the games resources, and by building and upgrading structures. To be honest, there is a lot going on in Terra Mystica, so if you want to know more about the game before we dive into the digital app, check out our full Terra Mystica review here.

The main menus in Terra Mystica should feel quite familiar to anyone who has used a Digidiced app before. Players have the option to play either vs the AI or online against other players.

Once into the game proper, veteran Terra Mystica players should feel right at home. The game board and player mats have been faithfully recreated in all their digital glory. Interestingly, Digitdiced appears to have skipped their usual flourishes and animations in favor of a more traditional board game look. I’m guessing this is due to the already massive amount of information the app needs to convey to the players. While I always love the little touches they put on their apps, it was probably a good idea for them to scale the extras back.

For the actual interfaces, the app is smartly laid out. Players can select their actions via a standard action wheel that lists all available actions, or by clicking an appropriate terrain hex. The app intuitively knows what you are trying to do when you click a feature. For example, if you wanted to change a dwelling into a trading post, you could either do it through the action wheel, or if you just click on the dwelling to being with, the app will realize what you are trying to do and offer you the appropriate choices.

The main screen’s interface is usually dominated by either your player board (with three different views to show all your race information), or the main game board. Along the top of the screen lies a whole host of panels that will pull down when selected. These range from power pools, to action tiles, to the cultist track. Everything is smartly managed in the app and once you know where everything is, you can easily move around.

Unless you are a regular player of Terra Mystica, chances are you are going to jump on the provided tutorial when you first fire up the app. While it’s not the most complex eurogame out there, Terra Mystica also isn’t a casual game that you are just going to pop into every now and then. This is a heavy euro game with a lengthy learning curve.

So with that being said, I’m glad that there is a guided tutorial for the app. It takes players through a series of 5 “missions” to give you the basics of the game. However I did find the tutorial to be a little lacking, and, once I was finished with it, I still didn’t feel like I had a solid understanding of how to play the game.

To add on to that disappointment was the fact that the in-app rulebook was simply a link to a PDF on a website. While I know having to integrate the full rules into the app would have been extra work, this felt like a particularly lazy design choice. If you are looking to get a solid understanding of how to play the game, you’re best bet is to watch one of the many teaching videos on youtube.

Now once you get a solid understanding of how the game is played, the Terra Mystica app works fantastic. Digidiced has been working diligently since the launch to quash any bugs that have popped up, with numerous updates already being released.

For gameplay, you can play Terra Mystic either online or against the AI. Online play offers you the ability to either challenge a friend or use the game’s general matchmaking to play against random player. As the multiplayer is asynchronous, expect games to take a long time to finish. However you don’t have to keep your app running the whole time thankfully.

For me, I mostly stuck with playing vs the AI as I’m trying to get up to speed again on the nuances of the game. And on that front, one of my favorite updates has been the revision of the AI opponents. I always appreciate when there are multiple levels of AI to choose from, and Terra Mystica offers 4 different levels of AI.

Now I should point out that they are all listed as “easy” AI, with medium level still being developed. Interestingly, the difference appears to be the amount of time the AI spends calculating moves on their turn (from 1 second to 15 seconds). As I’m not a particularly good Terra Mystica player, I’m not 100% sure how much better the 15 second thinker is vs the 1 second. I mostly stick with the 1 second AI, but that’s because I’m pretty impatient and the thought of waiting 15 seconds for an AI turn doesn’t excite me.

Terra Mystica couldn’t have been an easy game to bring to tablets. The amount of information that players need to have access to is fairly substantial. But I think Digidiced worked out an elegant solution. Once I learned where everything was and how it worked with each of the menus, I was quickly flipping around to where I needed to be. When you need to spend resources, the app smartly calculates what you have to spend and will even convert power points as necessary.

While the Terra Mystica App might not be the prettiest of Digidiced creations, I think they did a faithful job of recreating the board gaming experience on our tablets. Other than the mentioned learning curve and subpar rulebook, this is a solid translation of Terra Mystica.

I have tried out the app on both the iPhone and iPad and, while I much preferred the iPad version, the game is definitely playable on the iPhone. The app does a great job of presenting you with the information you need at the right time, and hinting at you when you need to make a choice in a different menu. If you are looking for a way to play Terra Mystica when you aren’t at your gaming table, Digidiced has brought us a great option.

If you’d like to get a copy of the Terra Mystica App, you can download it for $9.99.

Final Score: 4 Stars – A great digital translations of a much loved eurogame. While the app isn’t the most newbie friendly, veterans will feel right at home here.

Hits:
• Faithful recreation of the board game
• Play online or vs various AIs
• App expertly manages the information flow to the players
• Interface will know what you want to do in various ways

Misses:
• The tutorial isn’t deep enough
• Rulebook is just a link to an online PDF

Kickstarters of the Week: 9/26