We review the unique combat game Steel Arena: Friday Night Robot Fight, published by GaGa games. In this hybrid euro/combat game, players take control of a mechanized robot seeking to pummel its opponents in the arena. 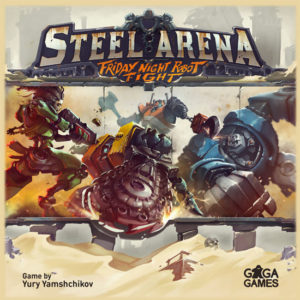 In 2011, Hugh Jackman starred in a movie called Real Steel. It was a movie set in the neat future where boxing is now handled by robots who smash each other to bits for our amusement. It’s a great concept that I actually could see happening in the future. While I didn’t really have high expectations for the film, I actually enjoyed it.

If I were to take Reel Steal and compress it into a board game, it would probably end up as Steel Arena: Friday Night Robot Fight. In this diceless combat game, each player controls a robot as they duke it out for the most trophies. So let’s dive in and see what this game is really about.

Steel Arena: Friday Night Robot Fight is a modular fighting game for 2-4 players that takes about 30 minutes to play. It plays best with 3-4 players.

The goal in Steel Arena: Friday Night Robot Fight (simply referred to as Steel Arena from now on) is to destroy your opponents and collect trophies in the process. Each round, you will be activating different modules on your robot as you move, turn, and shoot the other mechanical warriors. As you take damage, modules will fall off your robot to be collected as trophies for your opponent. However, each round you can also add new modules to your robot, upgrading your abilities. Be the first player to collect 10 trophies and you win!

The game components in Steel Arena are solid, if unremarkable. The main component of the game are the 70+ hex tiles. These come in 5 different types: weapons, movement, turns, shields, and terrain. They are separated into 3 different “generations”, so expect more powerful modules to appear as the game progresses.

For the robots themselves, they are represented by a large, hex-shaped board with matching hex-tile. While the artwork in the game is well done, this was a bit of a miss for me. I would have much preferred a miniature with a hexagonal base for your robot on the game board. Moving a flat hex tile among a sea of tokens can be a bit of a pain. So while it would have upped the cost to produce the game, it would have been worth it in my opinion.

Overall I had no issues with the rulebook, with only minor typos here and there. One thing it could have used was an icon cheat sheet. Many of the weapons in the game are icon dependent and it can be hard to remember what all of them do. A player aid here could have helped keep the game moving. Other than those few nitpicks, we had no complaints with the components in Steel Arena.

Starting with the first player and going clockwise, each player takes a turn, which has 2 phases:

2.  Upkeep Phase:
Collect the tile occupied by your robot token (if any) and add it to your robot board. If your robot has 5 or less modules, it switches into “Forced Mode”. If it has 6 or more, it switches back to normal. Any modules with auto-cooling remove their heat token.
If there are any empty spaces on the board, fill them with a generation 3 tile.

After that, the next player takes their turn.

Combat is pretty simple. Choose a weapon and shoot a robot within range. Damage is automatic, unless prevented with a shield module by the target. When a player damages your robot, you must choose to discard a number of modules equal to the damage taken. The attacker takes those modules as trophies.

The game ends when either one player has collected 10 trophies or another player’s robot has been destroyed.

Something I realized about Steel Arena after a few plays is that it’s actually a bit of a worker placement game. Well, not a true one, but it definitely draws some inspiration from that genre. Each round you are placing cooling tokens on modules to activate them. At some point, you have to decide when you are going to skip a turn to clear them all off. I found that to be a pretty clever mechanic that brings a bit of Eurogame flair into this combat game.

Another interesting thing about Steel Arena is just how much turn over there is with your robot modules. It’s important to not get too attached to your build out in Steel Arena as any damage you take will destroy your modules. Really love that second weapon? Too bad, you might have to scrap if it you want to keep your ability to turn.

And as painful as it can be to watch your favorite modules head to the scrap heap, I think it helps keep the game somewhat in balance. If one player is getting overpowered, a few shots on the player can help knock them down a peg. Unless they have loaded up on defensive modules, they are going to start dropping pieces pretty quickly. And if you are loading up on defense, chances are your offense isn’t very good.

I have noticed that it does seem easy for a player to jump ahead with some lucky pulls. Since all the tiles are face down, you only know the type of module you will be getting, not the specifics. If one player manages to get a few speed or auto-cooling, they can be at a nice advantage until a player can find a way to destroy the modules. A player with a handful of speed modules is definitely going to be at a nice advantage.

So with that in mind, players can expect a lot of carnage in Steel Arena. You’ll be adding and dropping modules pretty regularly in the game. The added effect of that is down time in the game is fairly minimal. Turns will go by quickly, which helps to match the fast paced nature of what a robot fight should be all about. I don’t want laboring, ponderous turns in my combat game. I want quick action and lots of carnage, which Steel Arena delivers in spades.

Finally, let’s talk player scaling. I’ve found that while Steel Arena works well at all player counts, my favorite way to play it is with four players. The board size will change based on player counts, so even with two, there is still lots of action. However, everything is better with four players. More targets, more tiles to choose from and more action. And with three players, you have to worry about a 2 v 1 scenario happening when a someone decides to gang up on a weaker player.

I wasn’t sure what to expect when I first dove into Steel Arena. It’s a game about robots beating each other up. Yet it’s not a tactical minis game, and it’s not a euro game either. It’s sort of a hybrid game where you have to manage your actions, all while trying to pummel your opponents. Is that good? I think so, but I could see some players not liking this hybrid approach. In either case, I still think it’s a pretty fun game.

While Steel Arena isn’t perfect, as luck of the draw can have a decent effect on a player’s strength, and the weapons are a bit too icon dependent, it also does a lot of things right. The worker placement(ish) mechanic was a clever idea that stops the game from turning into a straight up slug fest. The fast paced nature of the game is very enjoyable and you can get in full battle in about 30 minutes.

Steel Arena is definitely a unique game, I’ll give it that. If you are looking for a tactical game with lots of carnage, yet is still fairly accessible, then give this one a look.

If you’d like to pick up a copy of Steel Arena: Friday Night Robot Fight, you can find out more information at GaGa Game’s website.

Misses:
• Needs minis for the robots
• Tile pickup can feel a bit random
• A player aid would be helpful for the icons